The owner of a craft shop, called The Fluff-a-torium, has received two "shockingly homophobic and threatening" letters since June 5 when the two rainbow knitted covers were put on display near the shop. 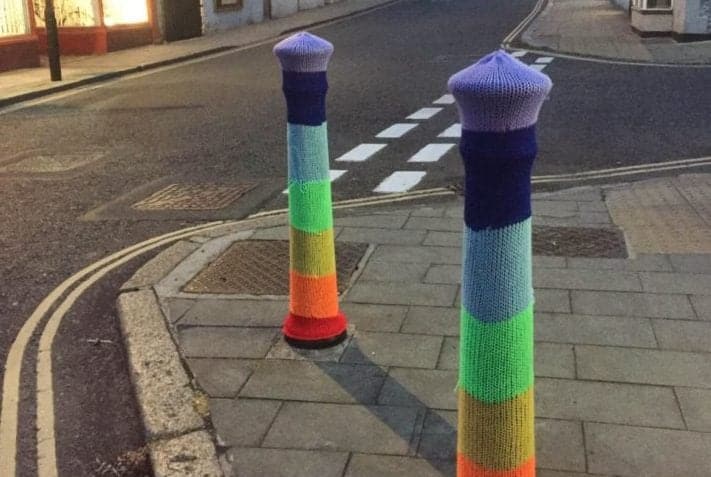 Police are investigating a hate crime after two ‘yarn-bombing’ crochet bollard covers were torn down – because they were celebrating gay pride.

The owner of a craft shop, called The Fluff-a-torium, has received two “shockingly homophobic and threatening” letters since June 5 when the two rainbow knitted covers were put on display near the shop.

Rainbow covers were put on the bollards by a local group, Gorilla Knitters, who frequently create “yarnbombs” to support different events.

The day after owner Gillian Harris received the first note, which read “take them down or I will”, the covers disappeared.

The second note shoved through her shop door, in posh Dorking, Surrey, prompted her to call the police.

It read: “We have to listen to way too much crap from you gays – now I’ve had enough.

“I’m straight and proud, I don’t rub it in your face so I ask you do not put up gay banners on our road or I’ll put up a banner of my own you will regret.”

Gillian said: “It was very homophobic and threatening – it’s just so awful that people feel this way.

“But we are planning to do a much larger display to celebrate gay pride month soon, not in the same street though.”

Now Gillian is asking people to send in 6-inch knitted or crocheted squares to use in single rainbow colours, so she can create a larger, rainbow yarn bomb.

After reporting the notes to the police, Gillian said: “It saddens me deeply to think that our well-intentioned loops of yarn – in the form of knitting and crochet, which exist to make people happy and support their life journey, are perceived so negatively by ill educated bigots – who ruin everything.

“We thank you all for your support and your friendship, and indeed for the many knitted and crocheted 6-inch squares that are now making their way into The Fluff-a-torium to help form the next even bigger, even better yarn bomb.

“We will not be downtrodden by one person’s illegal attempts at hate.”

Gillian received hundreds of message of support on the post, where people also slammed the theft.

“What miserable, horrible people/person they must be. Who doesn’t love a rainbow bright life?”

Amanda Steele said: “That’s so sad, they were lovely. Some miserable people in this world.”

Carol Fraser said: “There are some truly sad people in this world.

“What on earth is wrong with a bit of colour and fun in their lives. CCTV may find the culprit.”

“It’s beautiful, and heartwarming, and makes me want to learn to knit rainbow bollard condoms.”

A spokeswoman for Surrey Police said hate crimes will “not be tolerated”.

She said: “We are investigating following reports of abusive letters being sent to a Dorking shopkeeper.

“The owner of the knitting shop in West Street has received two letters through the door since June 5.

“A knitted display outside the shop was also stolen overnight on June 5.

“We are working with the shop owner and carrying out a number of enquiries, including checking CCTV footage, to identify who is responsible.

“If know who is responsible, or you have any information which could assist our investigation, we would like to hear from you.

“Hate crime will not be tolerated in Surrey.”