The Speedtail, the British manufacturer’s fastest-ever road car with over 1,000bhp and a top speed of 250mph, is due to be released next year 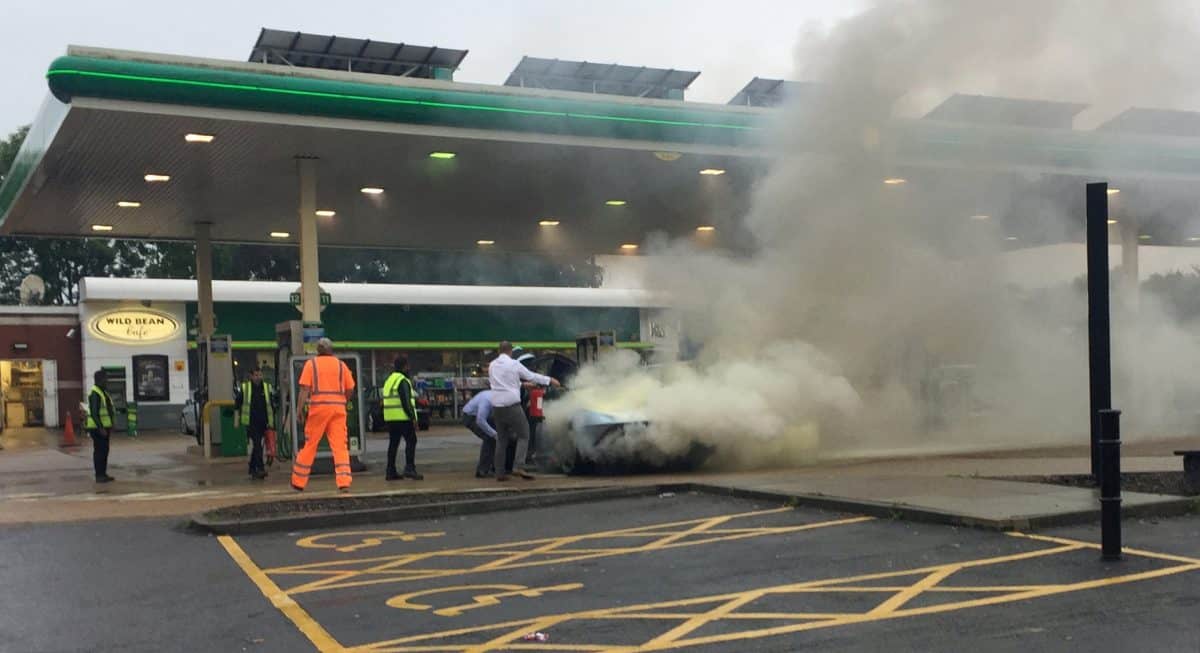 These pictures show the test driver of McLaren’s flagship £1.75m prototype supercar battling to stop it bursting into flames on a petrol station forecourt.

The McClaren Speedtail, the British manufacturer’s fastest-ever road car boasting over 1,000bhp and a top speed of 250mph, is due to be released next year.

But it experienced a few bumps in the road after two male McLaren employees were pictured dousing it with fire extinguishers as it smoked out on Thursday.

The car, capable of doing 0-186mph in just 12.8 seconds, was snapped at a BP garage near Guildford, Surrey, where firefighters were in attendance.

The driver moved it away from the petrol pumps in time to avert a major catastrophe and it was brought under control.

McLaren is investigating the cause but suspect it is the result of an electrical fault.

Roger Ormisher, head of global and North American communications for McLaren, said: “A prototype version of the McLaren Speedtail experienced what we believe at this stage to be an electrical fault, whilst stationary at a fuel station near Guildford in Surrey, UK.

“As a precautionary measure, having seen a small amount of smoke emanating from the vehicle, McLaren employees moved the car away from the fuel pumps and discharged dry powder extinguishers over the rear of the car.

“The prototype was subsequently recovered to McLaren premises.

“Nobody was injured as a result of this incident and investigations into the cause of the issue have commenced.”

The eyewitness said: “It was a bit a drama with the petrol station closing the pumps.

“The two owners pushing the car away from the pump and then putting it out with fire extinguishers and a fire crew attending.”

The 2020 Speedtail has already sold out ahead of its release to customers – with reservations taken for each of the limited 106 designated for production.

The Speedtail is described as a “pioneering petrol-electric hybrid powertrain” which places the driver in the centre of the vehicle with two chairs to the left and right.

The 5.2m-long Speedtail is described as “the spiritual successor to the iconic McLaren F1”.

The driving position is among a number of key design features linking the two cars over two decades apart.

To reach its impressive top speed it features a driving mode named ‘Velocity’ which adjusts the car’s idle speed to charge the batteries, adjusts the active aerodynamics, lowers the car’s ride height by 35mm and retracts the rear-view cameras.