A wheelchair-bound pensioner with cancer faces paying thousands on taxis for hospital appointments after new NHS rules said she was ‘independent’. Widow Jennifer Summers, 72, has been in a chair since polio struck aged four and free specialist transport to and from hospital after her husband died five years ago. But when she rang to […] 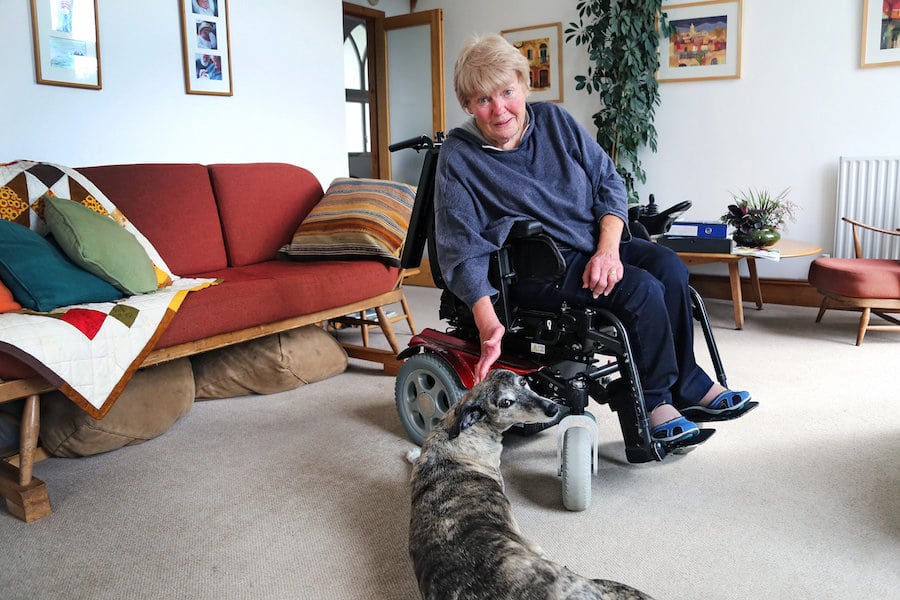 A wheelchair-bound pensioner with cancer faces paying thousands on taxis for hospital appointments after new NHS rules said she was ‘independent’.

Widow Jennifer Summers, 72, has been in a chair since polio struck aged four and free specialist transport to and from hospital after her husband died five years ago.

But when she rang to book her normal lift last Friday she was told she was no longer eligible for a free ride.

Instead, Jennifer had to pay nearly £100 for the 25-mile round trip from her home in Falmouth to the Royal Cornwall Hospital Truro for a check-up.

And with 15 rounds of radiotherapy ahead of her she faces a travel bill well over £1,000.

NHS bosses say the decision stems from a “revision” of its NHS-funded transport policy.

Jennifer, who is battling cancer for the third time and cannot drive, said she called the service twice and was told the same thing by different people.

She said: “I am 72, have polio and when you get older that makes you exceedingly tired.

“Everything is a struggle – to get dressed, to get meals.

“I just cannot use public transport. I cannot bear weight so cannot use ordinary cars.”

Jennifer said she was stunned to be told the news when she rang to book ambulance transport as she has done for her “vast amount of appointments”.

She added: “They asked if I have blackouts or need oxygen and thankfully I do not, but they said I am deemed independent and cannot have the transport.”

Jennifer said feared for others in a similar situation.

She said: “I have booked a taxi for Friday but if I had to do that for my radiotherapy that is a lot of money.

“I would pay if I had to, as it’s necessary to get to appointments which are important for my health.

“But a lot of people cannot afford that.”

Jennifer said she was left annoyed that there was no warning or offer of a cheaper suitable alternative to taxis.

“It is pretty stressful,” she added. “When I was calling everyone trying to organise something I could feel my blood pressure go sky high and I was at the end of my tether.

“Twelve years ago when I had breast cancer my husband was alive and took me to radiotherapy. But it that takes a lot of out you.

“I realise it is a cost to the NHS and I regret that, but I wish there was some sort of half way measure.”

She said the NHS’s Transport Access Patient (TAP) scheme doesn’t have the required equipment to be able to accept wheelchairs.

Her sister Di Coffey added: “A trip on a bus is often a welcome outing for my sister but to expect her to cope with three weeks of daily trips with bus changes while undergoing radiotherapy is outrageous.”

Local councillor Candy Atherton has taken up the case and written to the hospital and Cornwall Council about the matter.

Mrs Atherton said: “I am wheelchair user and reliant on my husband to drive me. I cannot get my chair on a train let alone a bus.

“I understand the financial pressures the NHS is under but seriously question the idea that a disabled person is independent just because they have an electric wheelchair.”

Health services commissioning group NHS Kernow said that it did not consider all wheelchair users as independent and no longer eligible, as Jennifer claimed she was told.

A spokesman said: “I’m checking the claim that the woman has been told wheelchair users are now regarded as being independent and no longer eligible for help.

“This is certainly not in any communication we have sent to people who use the service and is not in the policy.”

NHS Kernow governing body member Rob White added: “NHS Kernow spends £6.4 million a year on its transport service, provided by lots of different organisations. This has led to a disjointed service, with areas of duplication, which is not only costly, but confusing.

“Following a consultation, we have revised our NHS-funded transport policy to provide clarity on what will and won’t be funded and ensure it is in line with national policy.

“This will ensure everyone is assessed in the same way, regardless of where they live.

“We are now writing to people who may be affected by these changes to let them know about what support they might be entitled to and how they can ask for a review of their eligibility criteria.”