The letter is estimated to sell for around £1,000 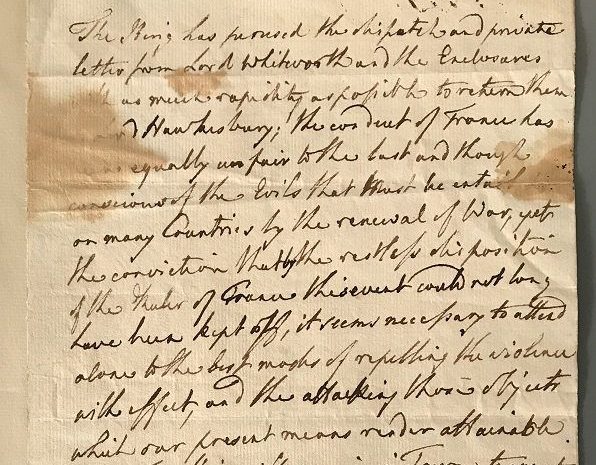 A rare handwritten letter by King George III showing his intent to take Britain to war against Napoleon in 1803 is set to be auctioned.

The document described as a “defining moment of history” is dated 14 May 1803 – which is four days before Britain formally declared war on France.

The letter, which was written to Lord Hawkesbury – the Secretary of State at the time – is estimated to sell for around £1,000.

In the letter, the King wrote: “The King has perused the dispatch and private letter from Lord Whitworth” – a British politician and diplomat who at the time of the letter was ambassador in Paris.

He added: “And the Enclosures with as much rapidity as possible to return them to Lord Hawkesbury. 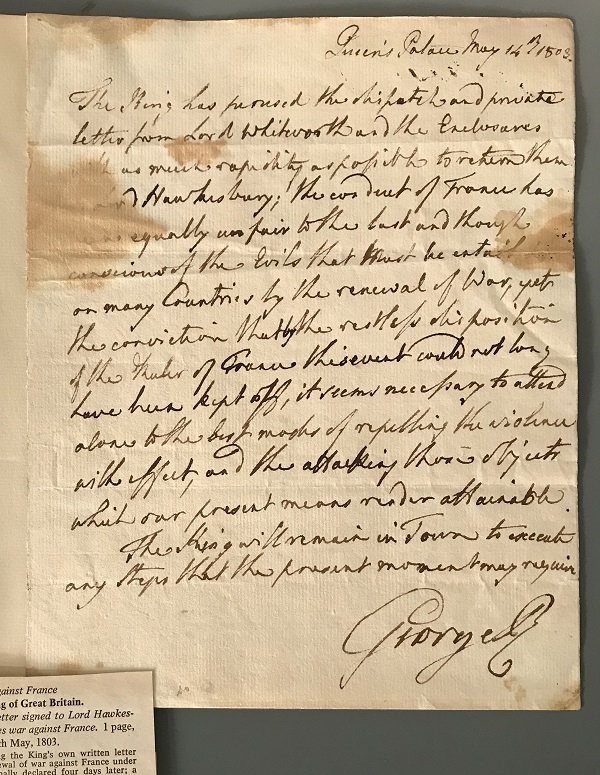 “The conduct of France has been equally unfair to the last and though conscious of the Evils that must be entailed on many Countries by the renewal of War, yet the conviction that by the restless disposition of the Ruler of France this event could not long have been kept off, it seems necessary to attend alone to the best modes of repelling the violence with effect, and the attacking those objects which our present means render attainable.

“The King will remain in Town to execute any Steps that the present moment may require.”

The message was signed: “George R.’.”

The French war lasted for 12 years and saw a series of major conflicts pitting the French Empire and its allies.

It was led by Napoleon I – French statesman and military leader – against a fluctuating array of European powers formed into various coalitions, financed and usually led by the United Kingdom.

Napoleon was decisively defeated at Waterloo, and he abdicated again on 22 June.

The Treaty of Paris, signed on 20 November 1815, formally ended the war.

The treasure document is being sold by an anonymous vendor who previously purchased the letter in 1966 for £55.

Charles Ashton, a Cheffins Auctioneer said: “This letter is a defining moment of history showing the King’s intention to go to war with France and Napoleon.

“The Napoleonic wars are iconic of the huge victories of the British army and these were defining moments in our country’s history, laying the groundwork for the nation to rule the waves and put us at the forefront of European history.

“Whilst relations between Britain and France had been somewhat strained since the Treaty of Amiens in March 1802, this letter marks the end of peacetime negotiations and contains the explicit instructions from the King to proceed with war.”

It is due to go on auction on 10 January at Cheffins library sale in Cambridge, Cambs.,