A huge lorry took 14 hours to travel 35 miles as it transported one of the heaviest loads ever to be taken on a British road – weighing a whopping 560 tonnes. The giant coils of steel cabling were transported on a truck which measured 6m (20ft) wide and 82m (269ft) long – which together […] 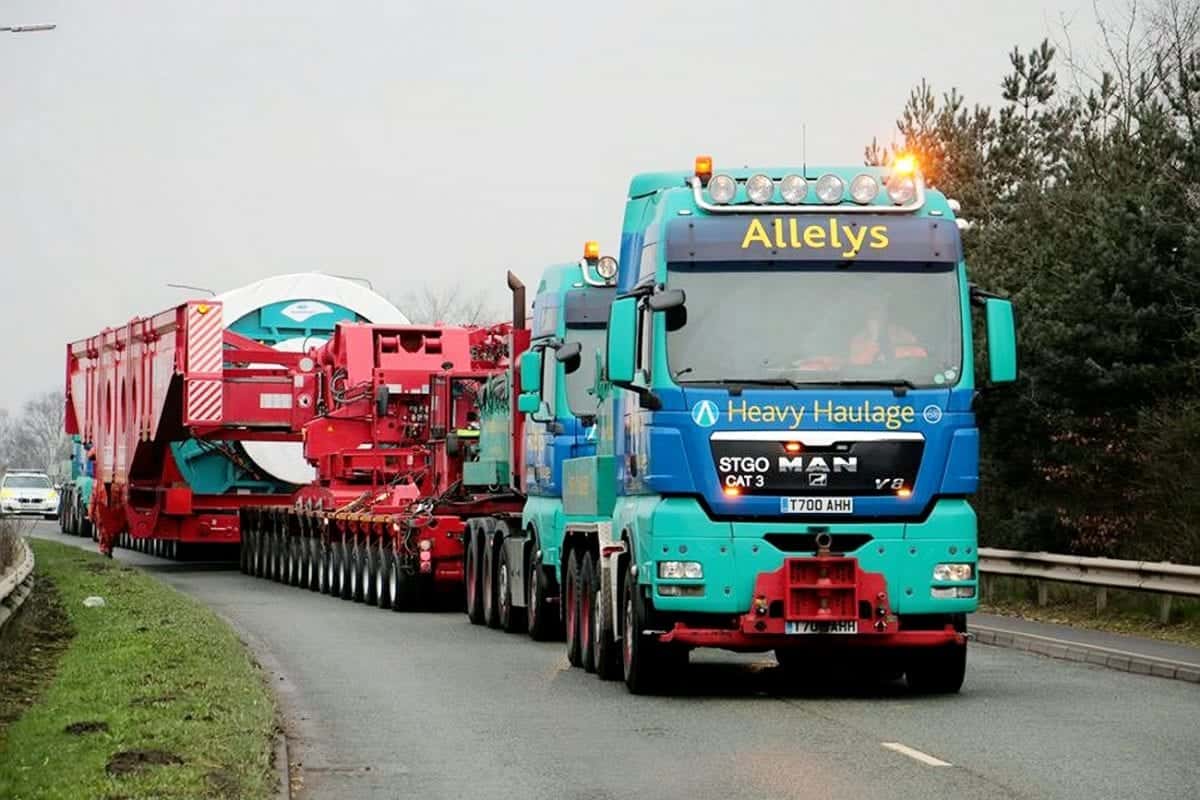 A trailer which weighed a whopping 560 tonnes took 14 hours to painstakingly travel from north Nottinghamshire to Goole - just over 35 miles to north. Last Saturday (March 11) the abnormal load took the trip under police escort from Worksop, setting off at around 10pm. The six metre wide and 82 metre long vehicle transporting a huge reel of steel cable could only move at a maximum of 13 mph, said East Midlands Operational Support Service (EMOpSS) - meaning the trip, which normally takes around 45 minutes, took 14 hours to reach the East Yorkshire port. From there it will continue on its journey to Africa.

A huge lorry took 14 hours to travel 35 miles as it transported one of the heaviest loads ever to be taken on a British road – weighing a whopping 560 tonnes.

The giant coils of steel cabling were transported on a truck which measured 6m (20ft) wide and 82m (269ft) long – which together weighed more than a space shuttle.

The enormous vehicle brought traffic to a standstill as it crawled along roads at a maximum speed of just 13mph.

The extraordinary undertaking took six months of planning, with heavy transport specialists being called in to help.

The huge load set off on its journey from Worksop at 10pm last Saturday and arrived in Goole, East Yorkshire, 14 hours later where it will be shipped to Africa. Amazingly, no full road closures were required for the painstaking trip, with traffic being directed away from the lorry by specialist officers.

Dave Robinson, one of four East Midlands Operational Support Service (EMOpSS) abnormal load officers, said it was the biggest load he has ever manoeuvred.

Mr Robinson, who has 27 years’ experience in traffic control, said: “In my entire career I cannot think of a time when we have moved a heavier or longer load.

“We had to look carefully at the route as its size meant there was a bridge in Ranby that it couldn’t go over so we had to find an alternative route.

“I’m really pleased to say the move went really well and there were no unexpected problems which is down to meticulous planning and partnership working.” Angela Atton, who is the abnormal loads officer for Leicestershire and Nottinghamshire, said: “I receive approximately 150 notices each day, about three thousand a month, from haulage companies about abnormal load movements travelling through our Force area.

“In 2016 there were 51 loads which required a Police escort by EMOpSS officers.

“There are thousands of loads moving around our roads that don’t need a police escort but we are always here to offer help and advice.”

The 100m-long vehicle took up two lanes of the motorway as it inched along at just 4mph causing 13 mile tailbacks.
ENDS