Faruque Ahmed, 46, taught the sisters Arabic during two-hour lessons held every weekend between 2009 and 2011. 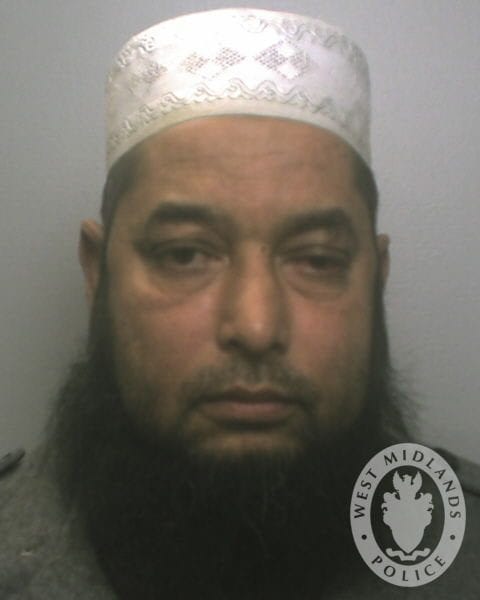 An Islamic tutor who sexually abused two sister during home study sessions has been jailed.

Faruque Ahmed, 46, taught the sisters Arabic during two-hour lessons held every weekend between 2009 and 2011.

The girls who were aged between eight and 12-years-old at the time, were sexually assaulted underneath the marble dining room table at their home in Warley, West Midlands.

The girls kept tight-lipped about the catalogue of abuse until one disclosed the offences to an NHS mental health nurse on September 8, 2016.

The younger girl, now aged 18, disclosed how the Imam regularly touched her between the legs having pulled her trousers around her knees – and how she would be struck with a bamboo cane if she resisted.

He would discreetly shuffle the girls’ chairs closer together to get within easy touching distance.

Ahmed, of Stoke was arrested on February 10, 2017 and in police interview admitted tutoring the girls but denied ever assaulting them.

The pervert was charged with multiple counts of sexual touching a child and sexual assault of a child by penetration.

Appearing at Wolverhampton Crown Court on Friday (23/11) Ahmed was jailed for 14 years having been found guilty on 10 of the 13 counts against him.

He was also given a sexual harm prevention order – preventing him with working with children for life and will be on the sex offenders register for life.

West Midlands Police, Detective Constable Sarah West of the Child Abuse Unit said: “Both victims want to raise awareness within their community and to urge anyone who’s suffered abuse to speak out.

“They know first-hand how victims can feel pressured to remain silent – that by reporting offences it somehow brings shame on the family – but they recognise now that by doing so it allows offenders to continue offending and puts other children at risk.

“The girls have now got justice for the horrible abuse inflicted on them by Ahmed and are getting the support they need to move on with their lives… and they want other survivors of abuse to do the same.

“They felt powerless to speak at the time… they were scared young girls, confused, and didn’t really know what was happening.

“They had never had any sex education discussions either with their parents or at school.

“One of the girls described how it was surreal at the time: whilst abusing them under the table he would continue teaching Arabic, he was very calm and natural so no-one would realise there was anything untoward going on.

“With the passing of time, though, it’s become clear to them that they were being abused by a sexual predator – and they have now found the courage to speak out to get justice and potentially spared other girls the trauma of suffering at his hands.

“I wish the girls all the very best for their futures and thank them for their courage in speaking out.

“Their brave actions may save other children from being abused and for that they can be rightly proud.”