A high-flying city banker who was snared on Facebook Live by paedophile hunters trying to meet a 14-year-old girl for sex has been jailed for 15 months. Citibank business manager Balachandran Kavungalparambath, 38, travelled over 100 miles to meet the teen after grooming her online. But a court heard how he was met by the […] 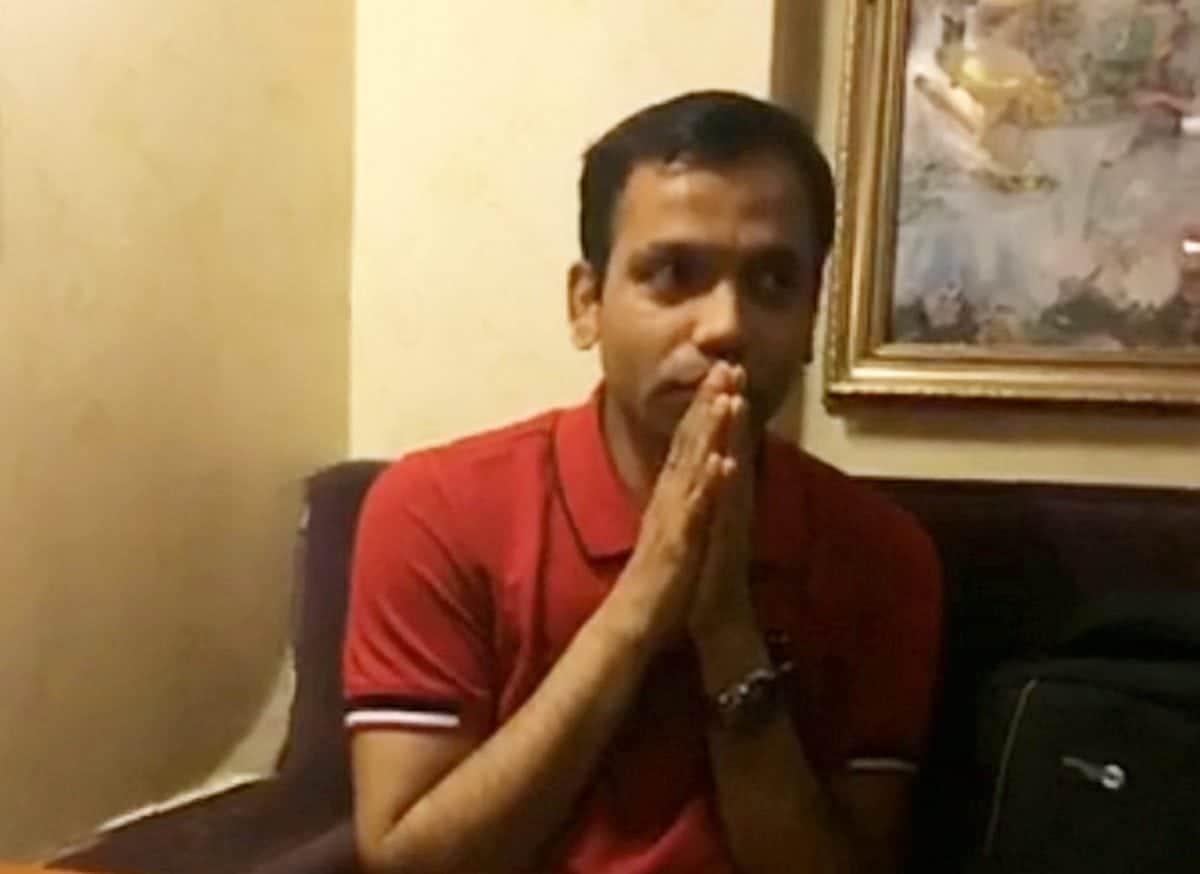 A high-flying city banker who was snared on Facebook Live by paedophile hunters trying to meet a 14-year-old girl for sex has been jailed for 15 months.

Citibank business manager Balachandran Kavungalparambath, 38, travelled over 100 miles to meet the teen after grooming her online.

But a court heard how he was met by the ‘Internet Interceptors’ group, who had been posing as the underage girl.

Over 130,000 people watched a Facebook live stream of the banker breaking down in tears as extracts of his warped Whatsapp conversations were read back to him.

The married dad-of-one is seen repeatedly claiming he just wanted to have lunch with the fictional youngster.

At one stage he is ordered to empty the contents of his rucksack, pulling out perfume and condoms onto a table in front of him.

Kavungalparambath was jailed for 15 months at Birmingham Crown Court on Monday (23/10) after admitting to attempting to arrange or facilitate the commission of child sex abuse.

He was also placed on the sex offender register for 10 years and given a 10-year sexual harm prevention order.

The footage, which runs over an hour, starts with the defendant, who worked in London’s Canary Wharf, being cornered by three members of the group.

After being led into his hotel room in Birmingham, the paedo puts his head in his hands as the captors explain that the girl he was talking to did not exist.

He said: “She told me…whoever the person was that spoke to me spoke to me that she had a desire and she wanted to have sex, but that was not my intention and I had chatted with her.”

After constantly repeating “Jesus Christ”, and “please”, he said: “It’s not right. I accept my mistake.”

When asked what would happen to him as punishment, he added: “I will have to leave the country. I am from India.

“I lose my job, I have to leave the country.”

“But as I said, I was supposed to have a chat with her, it was not with the intention of getting her into a bed and having sex with her.

“That was not my intention.”

At that stage a member of the group intervenes and starts quoting part of the seedy chat.

He said: “What I don’t understand is this part here: ‘I want to push my fingers inside’.
Who are you saying that to? What age are you speaking to when you’re saying that?”

When pushed further about what he meant, Kavungalparambath admits: “I meant to have sex with her.” 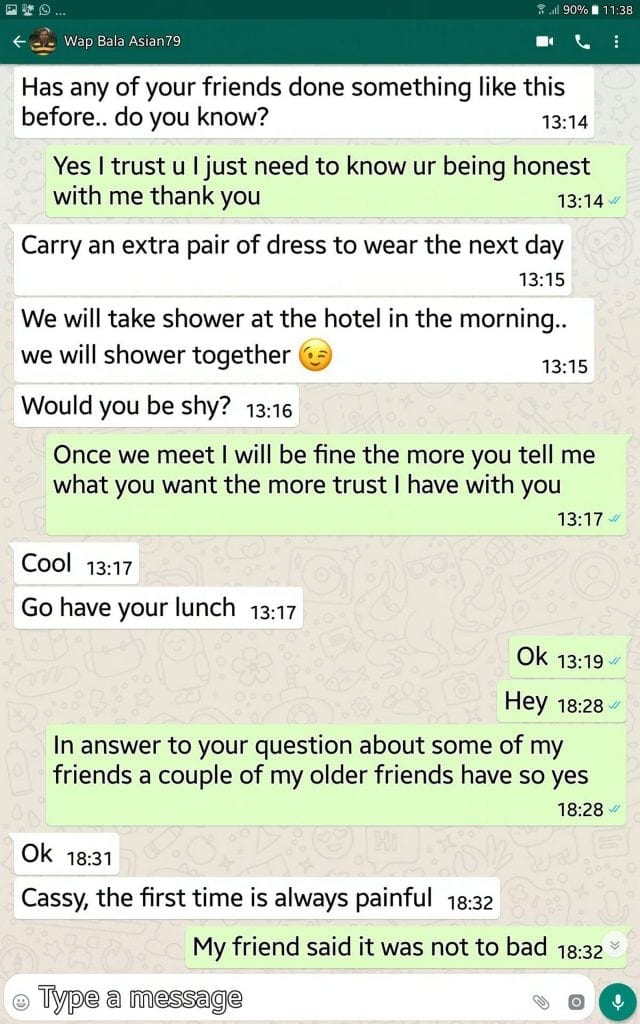 Discussing his career and £54,000-a-year salary, he claimed it’s not “a high profile job”, to which a female hunter responds: “There are young guys queuing up to get into Canary Wharf with jobs. Queuing up.

“You travelled all the way up from London to Birmingham today to spend the day in a hotel room with what you believed to be a 14-year-old child, to have sexual intercourse with her.”

The live stream ends with Kavungalparambath being led into the back of a police car by officers.

The sickening chat logs show the baker explaining his sick plans to the ‘teen’, saying he wanted to “kiss you and lick you madly and want you to get excited.”

As the pair arrange the meeting, he says “I want to see those beautiful eyes” before adding “making you pregnant is not my intention” and the meeting “would end with us making love.”

The chat log also shows the married man saying: “We will take a shower at the hotel in the morning..we will shower together. 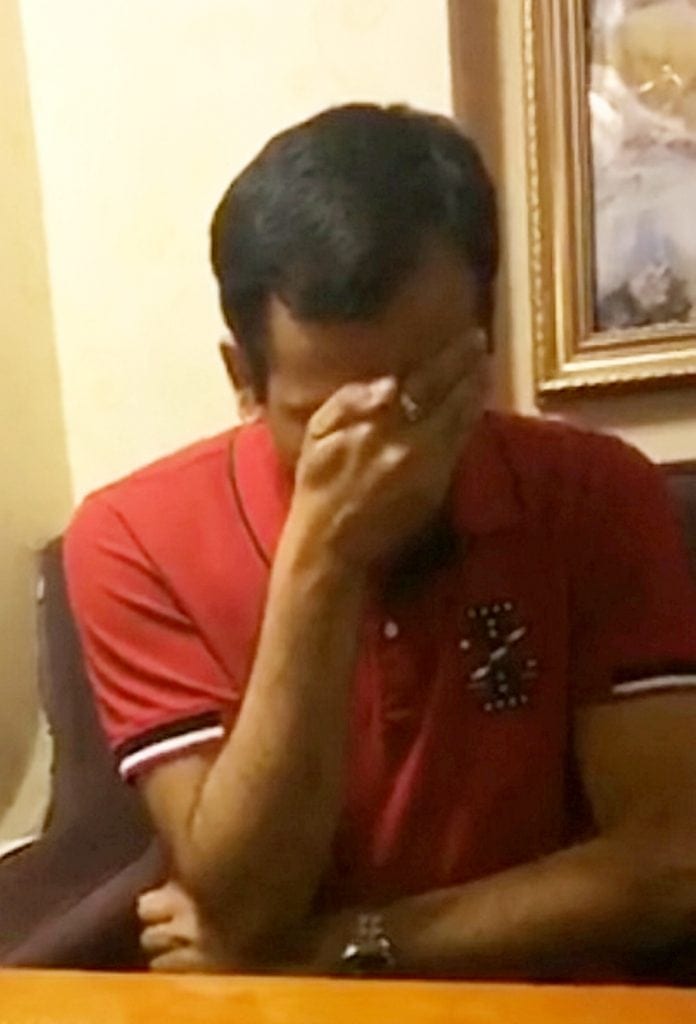 He also claimed “the first time is always painful”, before claiming the fictional girl’s mum is “very strict” when she refuses to talk on the phone out of fear of being caught.

A spokesperson for Citibank said: “This individual is not a Citi employee any longer. The offences are abhorrent.”

Woman hunter [W]: “We’re part of a paedophile hunting group, we’re called Internet Interceptors. We track down paedophiles. What that means is that we speak to people online that speak to children.

Balachandran Kavungalparambath [BK]: “Ok I think… I understand where you are coming from.

W: “Shall we go into your room and talk? Are you welcoming all of us into your room? No one is here to hurt you, all I want to do is speak to you.

*Leads them into room*

W: “I need to record, let me tell you why I’m recording. It’s for my safety and for your safety. If you say that I attack you then this is evidence that I haven’t attacked you.

What are you doing here today?”

BK: “I came here today to meet a friend who told me she was from Birmingham, which was true.”

W: “Ok, if I show you a picture of that person could you confirm that that is the person that you’re here to meet? [Nods]

“How old is this person?”

W: “Ok, I’ll ask you one more time. How old did this person tell you she was?”

W: “Right, she told she was 14. And what is the purpose of you being here today, in this hotel room?”

BK: “I wanted to meet her. She persuaded me, saying that she would like to meet me. I have the chats with me.”

W: “It was one of my colleagues speaking to you, do you understand?”

“I didn’t mean to hurt anybody. Please.

“I didn’t mean to hurt anybody. If you look at my chats you will see that I kind of told her that I just want to meet.”

W: “That you want to meet her? Did you say anything else?”

BK: “She told me…whoever the person was that spoke to me spoke to me that she had a desire and she wanted to have sex, but that was not my intention and I had chatted with her.”

W: “We’ll pause there, because you say that she had a desire to have sex with you.”

CUTS OUT – NEXT VIDEO

BK: “I don’t speak to children below teenage, it’s not right.

“I accept my mistake.”

W: “And you work in a bank in Canary Wharf, right?”

BK: “I will have to leave the country. I am from India.”

W: “That’s not a problem. Why would you have to leave the country?

Male colleague [M]: “Do the bank sponsor you? They sponsor you to stay in this country?”

BK: “Not in a sexual way, of course. If you look at my chats, I have a lot of chat friends and I talk to them decently. Somehow I knew that this was happening, because I’ve seen videos of this nature where people have been caught.

“I have heard about this. I heard about these groups. But as I said, I was supposed to have a chat with her, it was not with the intention of getting her into a bed and having sex with her.

“That was not my intention.”

M: “You understand that it’s wrong, but you’ve travelled how far to get here and book a hotel? When were you going to realise that it was wrong? When she got here?”

“I am not justifying my acts or my chats, I know I did a mistake,”

W: “You did say that you wanted sex with her in your chat log. You did, didn’t you?”

W: “What exactly would have happened when this girl walked through the room?”

“What was you going to do?”

BK: “I have constantly been asking her to meet me outside for lunch. But she said ‘no, I come directly to the room’. I’m not saying what I chatted is correct.”

“How do I know – because I don’t know you – how would I know whether you were going to have sex with her or you weren’t? Why should I take your word on it?”

BK: “Because I haven’t done this before”

W: “Ok. Most paedophiles, when they become paedophiles and carry out their acts have never done it before. Because they act on their sexual urges, and that’s when it happens. How can I trust you?

W: “Why are you saying to my colleague ‘please, no, don’t’? Because that sounds like a cry of help for me. ‘Please don’t torture me, with all of this disgusting stuff’. Is that what your cries are?

W: “Do you? How do you think a child would have felt, for the rest of their life? Victims feel dirty.”