Ruby the Springador fell down a mine shaft in the hills between Penrhyncoch, Wales 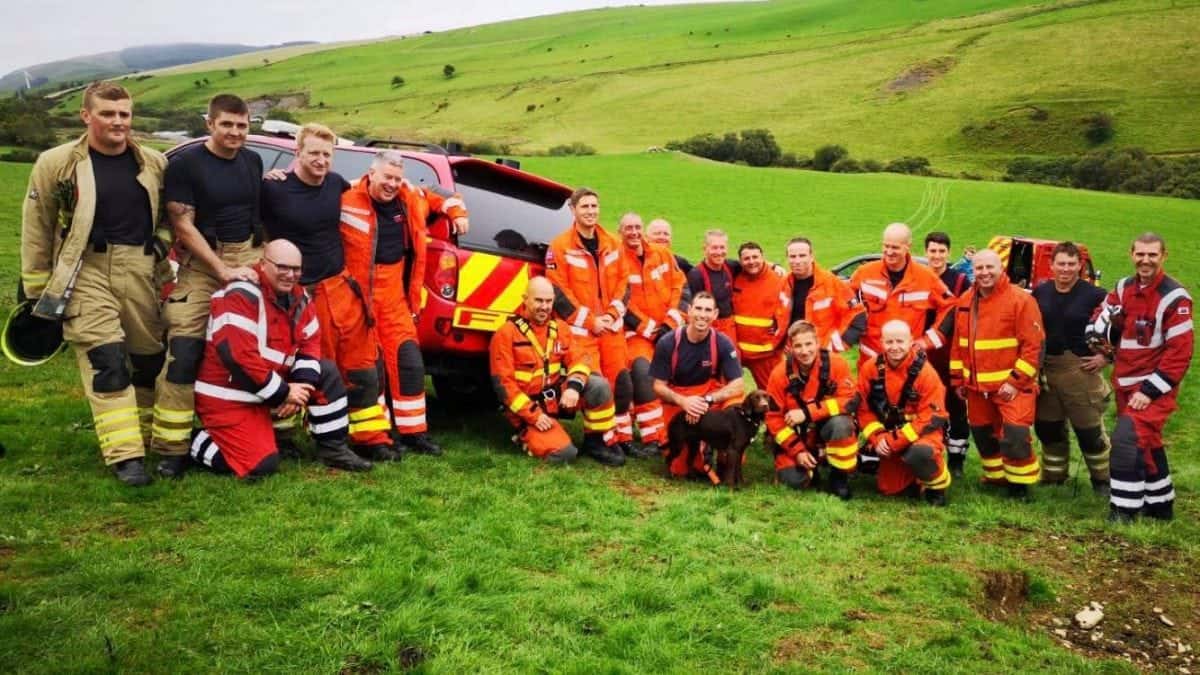 A lucky puppy narrowly escaped death when it was rescued by a team of 20 firefighters – after falling 115FT down a mine shaft.

Ruby the chocolate Springador chased a rabbit through a hedge and fell down the disused lead mine – where she was trapped for 19 hours.

Owner Dylan James, 36, stayed by the 10-metre wide hole until the early hours of morning calling for the nine-month-old – but feared the pup had died when he didn’t get a response. 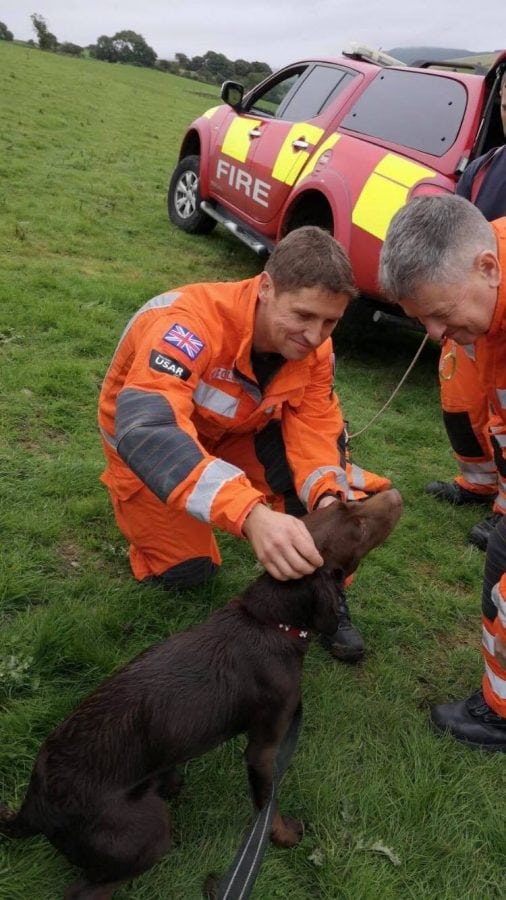 Ruby, a cross between a Springer Spaniel and a Labrador, was miraculously found alive and pulled to safety – with her only injury a small cut to a leg.

Dylan, a manager at an electrical supply store, said: “We were walking through forestry and a rabbit bolted across the field.

“Ruby chased after it through a hedge which was concealing a broken fence around the mine shaft. 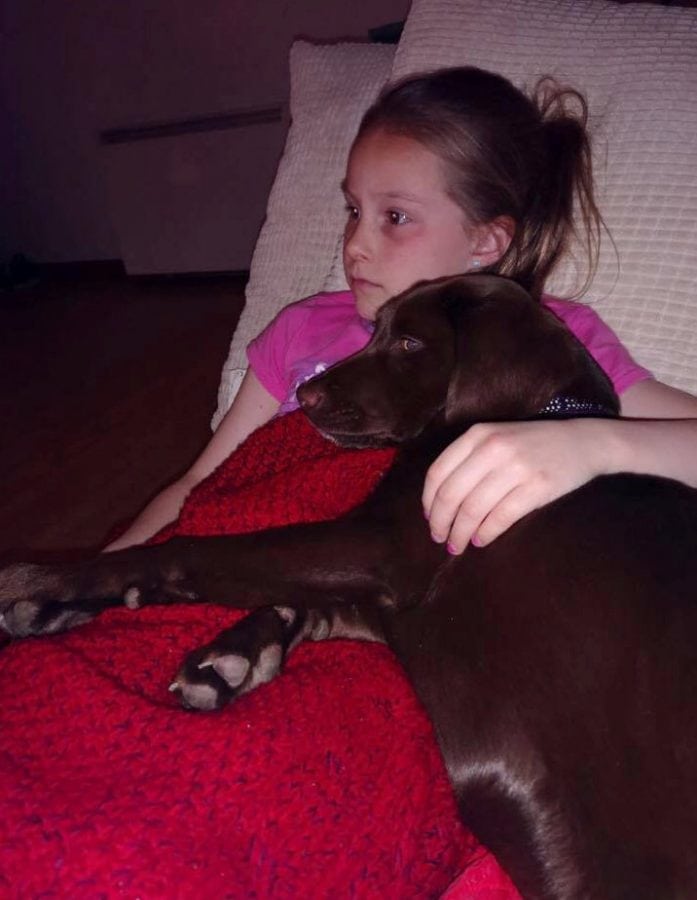 “I saw her go in and didn’t realise her fate. The next thing I heard was her whimpering like mad and a thud as she hit the bottom.

“That was at 8.30pm on Sunday – I stayed there for six hours until 2am calling Ruby but I couldn’t hear her.”

Dylan and Beth headed back to the mine shaft early on Monday morning when rescue crews from Aberystwyth, Pontardawe, Mid and West Wales, and South Wales arrived on the scene about 9am.

They lowered a camera and found Ruby lying motionless at the bottom of the shaft.

A member of the rescue team abseiled down the mine and brought Ruby to the surface, reuniting her with Dylan and Beth almost 19 hours after the ordeal began.

Dylan said: “She wasn’t moving, but there was a microphone on the camera and when my fiancée said Ruby’s name she moved her head. 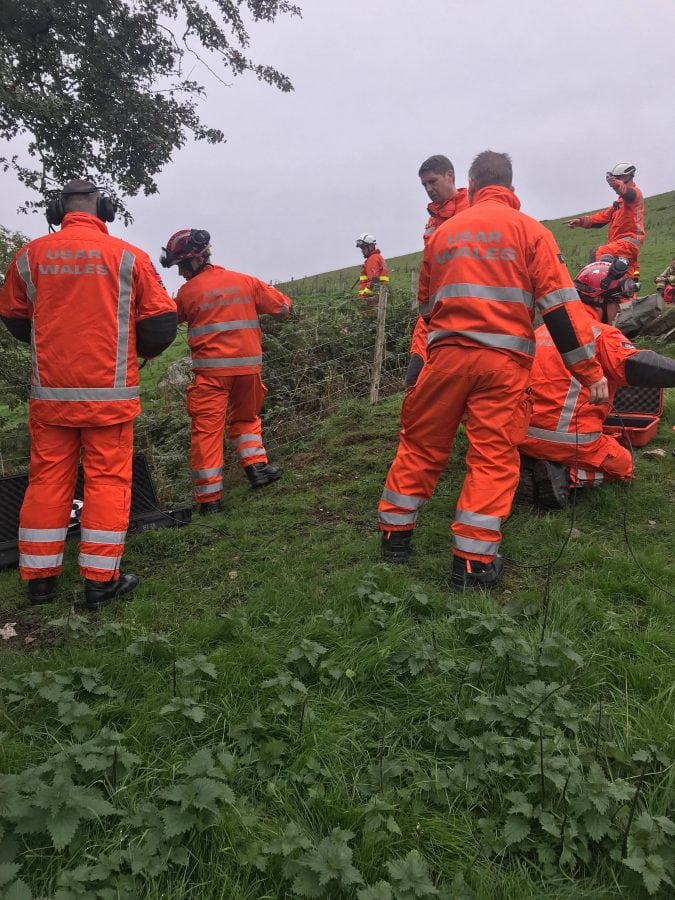 “There was a lot of joy when she came out alive and everyone was in tears.

“Beth’s mum came up from Cardiff to be with her and a couple of friends were there to show support.”

Dylan says daughter Halie, eight, and son Alfie, three, are “over the moon”. He was also walking with the family’s two greyhounds and two Jack Russells at the time.

Ruby, described as the “house dog”, is the youngest. The others are used to hunt rabbits and are kept in kennels in the garden.

Dylan added: “There was a lot of joy when she came out alive and everyone was in tears.

“Beth’s mum came up from Cardiff to be with her and a couple of friends were there to show support.

“We shook everyone’s hand and said thank you. I don’t think they’ve ever had so many hugs.

“The firefighters and rescue teams were all fantastic and we can’t thank them enough.” 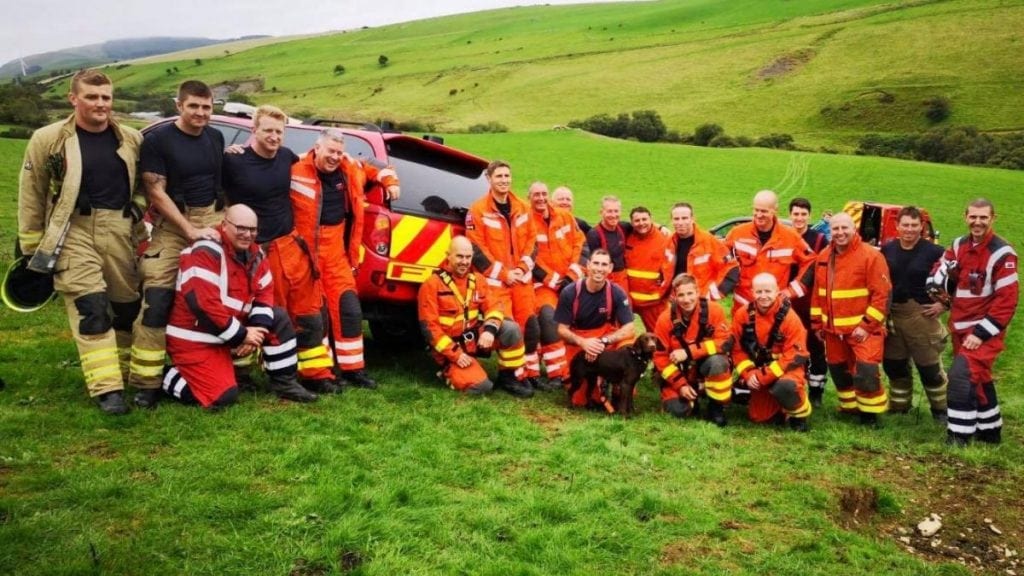 A spokesman for Mid and West Wales Fire and Rescue Service confirmed that they attended the scene on Monday along with a Rope Rescue Team from Pontardawe and the Urban Search and Rescue Team.

The spokesman said: “Crews were called to rescue a dog which had fallen down a disused mine shaft in the Penrhyncoch area.

“The dog was located, using cameras and listening devices, approximately 35 metres down the disused mine shaft before being rescued by a level 3 rope rescue technician.

“A vet was also in attendance.”