This is the moment a ‘locked in’ lad who learned to write using his EYES met his hero Michael Morpurgo – and the author agreed to champion the schoolboy’s own book. Jonathan Bryan, ten, was born with severe cerebral palsy after his mum Chantal was in a car crash while pregnant, leaving him unable to […] 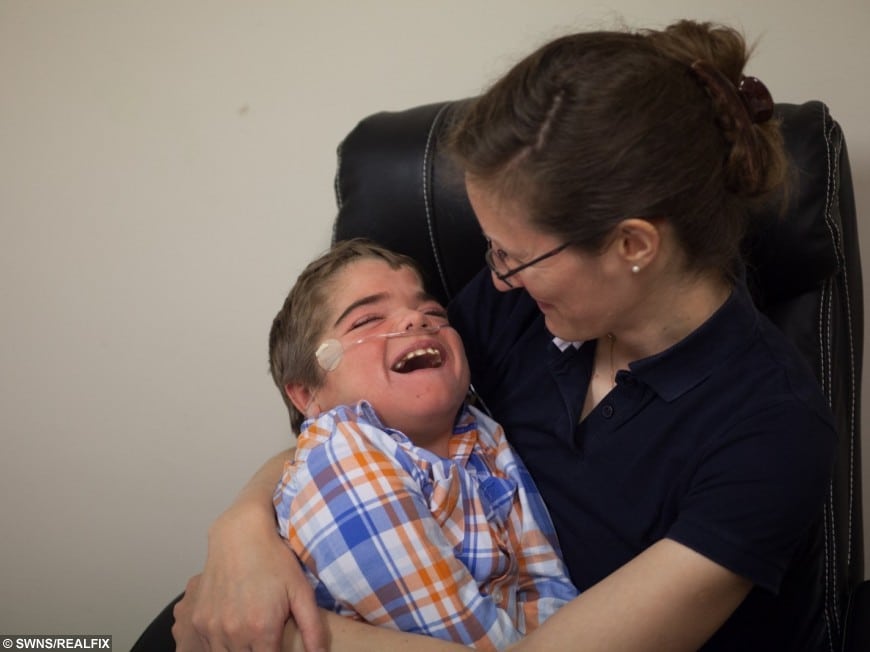 This is the moment a ‘locked in’ lad who learned to write using his EYES met his hero Michael Morpurgo – and the author agreed to champion the schoolboy’s own book.

Jonathan Bryan, ten, was born with severe cerebral palsy after his mum Chantal was in a car crash while pregnant, leaving him unable to walk and speak.

His family were told he had ‘profound and multiple learning disabilities’ and teachers did not teach him to read and write.

But his determined mother refused to give up and taught him how to use his eyes to ‘speak’ by picking pre-chosen words.

In just over a year Jonathan went from being totally silent to saying whatever he wanted via his spelling boards – and now can write complex poems and stories. The author read aloud parts of a book Jonathan is currently writing and was so impressed he agreed to write a foreword for the story.

Speaking of the meeting at Exeter Cathedral, where Morpurgo was working, Jonathan said: “It was wonderful to meet my literary hero.

“The best moments during the wish were hearing Michael Morpurgo read my story aloud, being able to ask him my questions and Mr Morpurgo agreeing to write a foreword for my little book.

“The wish has given me lots of good memories and the impetus to put a book together.

“Thinking back on the wish makes me feel happy and excited. Thank you for making my wish come true.

“I am meeting the head of an agency in London about possibilities for my book.”

Jonathan was born at 36 weeks and four days after his mother suffered a placental abruption when she was involved in a car crash.

He has severe cerebral palsy, kidney failure and supplemental oxygen dependency, leading to him have a limited life expectancy.

Doctors said he had suffered a lot of brain damage and one remarked he had “the worst MRI scan he had ever seen”.

He attended a specialist school for disabled children but was never taught to read and write.

But Chantal, who also has daughters Susannah, seven, and Jemima, four, started to home-school him aged seven and began by teaching him to spell, until he was able to choose pre-selected words.

But fast-learner Jonathan got bored of his mum’s chosen words and now uses three boards – letters, numbers and punctuation – which are held up in front of him, so he can make a selection with his eyes.

He now attends a mainstream school in the afternoons and writes a blog about his experiences along with poems and complex short stories.

Speaking of the meeting, proud Chantal said: “Michael was only meant to be with Jonathan for half an hour and had to be cajoled out after 50 minutes by his agent as he then had a concert to do.

“We went over to the cathedral for the concert, and then met Michael briefly afterwards, when Jonathan told him: ‘I loved it. You are compelling.’

“Meeting Michael Morpurgo was a dream come true for Jonathan, and it was a really special meeting of two writers.

“The girls enjoyed meeting Michael too and it was lovely that they could also be included.

“Susannah, who’s seven, gave him a poem, and Jemima, four, did a drawing for him.”

In a thank-you note to Michael, thoughtful Jonathan added: “Hearing you read my tale was like sitting at the feet of my storytelling master; immersed in the richness of your narration we travelled the landscape of my silence together.”