by Ben Gelblum
in Good News 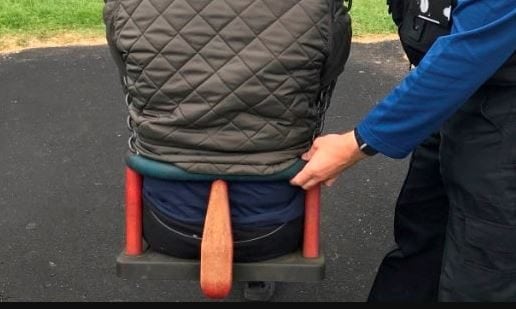 This is the incredibly awkward moment a 20-year-old man had to be freed by firefighters after getting stuck – in a child’s swing.

The red-faced prankster managed to squeeze his rear end into the kids’ play equipment but couldn’t get back out again.

He was firmly wedged for more than three hours until police and fire crews were called to rescue him from the swing in Landseer Park, Ipswich, Suffolk.

When a “shove and pull” method of swing-release failed, firefighters used a trusty screwdriver to take the swing apart.

The man was unharmed in the incident on Wednesday morning and was “grateful but embarrassed” to be rescued, shaking hands with fire officers.

The crew then screwed the seat back together so it could be safely used by someone of the right size.

They couldn’t resist posting pictures of the mishap on Twitter however, including a tongue-in-cheek caption which read: “Always use age appropriate equipment.”

In June 2015, a crew had to cut a teenager after she got stuck in a child’s swing in Ryders Hayes Park, Aldridge, West Midlands.

Her two friends took a picture to record the moment the 14-year-old realised she could not get out.