Two beer-loving pals raised a glass today on visiting a record-breaking 20,000 PUBS on the world’s longest pub crawl. Peter Hill, 60, and John Drew, 62, said cheers as they marked their incredible milestone having visited a boozer every week for the last 33 YEARS. The pair started the venture in 1984 with Peter’s dad, […] 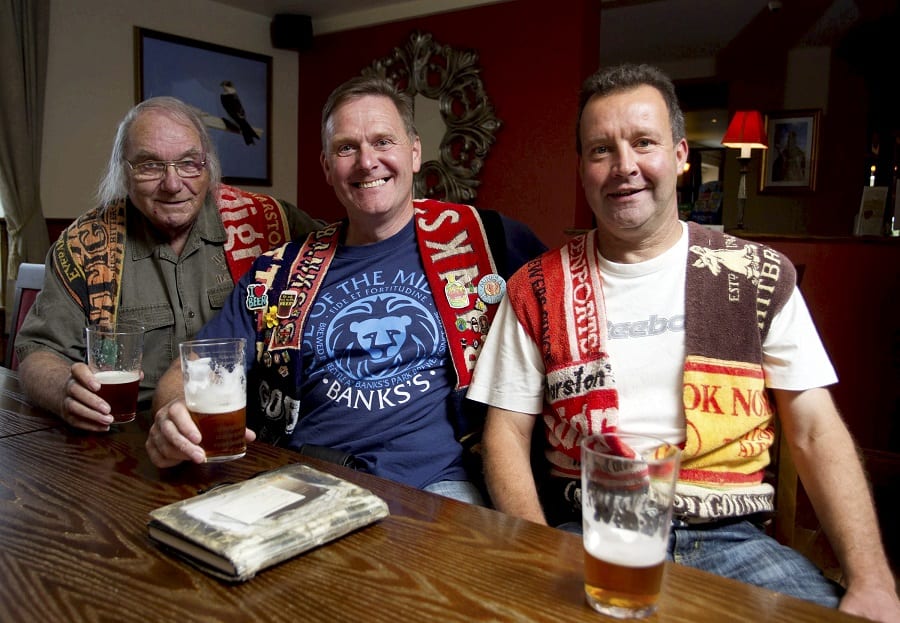 Joe Hill, Peter Hill & John Drew members of the Black Country Ale Tairsters, at their 18,000th pub. Two beer-loving friends raised a toast yesterday (Fri) to celebrate visiting their 20,000th bar in the world’s longest pub crawl which has lasted over 30 YEARS. See NTI story NTIPUBS. The group of pals - who call themselves the Black Country Ale Tairsters - have drunk in a different boozer every week since 1984 - back when a pint cost just 64p. And girls are banned from tagging along with them on their trips, which has taken in watering holes in every county in England, Wales, Scotland and Northern Ireland, The gang always wear homemade uniforms on each night out made of waistcoats fashioned from old beer towels. They hold the record for being the first to travel to pubs around the entire coastline of Great Britain and Northern Ireland. A few years ago they completed a seven-year quest to visit every pub in Wales after stopping off at all 11,000 of them. They have also been to every boozer in 11 Midlands counties and driven over 250,000 miles during their monster trip downing at least 46,500 pints. On Friday (3/3), the pair enjoyed a tipple at the Knot and Plough, Nottingham, to celebrate visiting 20,000 different pubs.

Peter Hill, 60, and John Drew, 62, said cheers as they marked their incredible milestone having visited a boozer every week for the last 33 YEARS.

The pair started the venture in 1984 with Peter’s dad, Joe, after the gang became bored with going to the same pub every week.

When the Black Country Ale Tairsters started a pint cost 64p, and after Joe sadly passed away in 2014, Peter and Drew have kept up the tradition. Girls are banned from tagging along as they visit a new boozer every Friday and go on road trips to the furthest reaches of England, Wales, Scotland and Northern Ireland.

They wear homemade waistcoats fashioned from old beer towels and have so far ticked off all 11,000 pubs in Wales.

Speaking over his 46,631st pint at the Knot and Plough, in Stafford, Peter, a retired engineer, said: “It’s a proud day for us.

“We’ve been covering it for two years, so hopefully we’ll be moving on soon having raised a lot for the local charities.

“It’s always been real ales, but it’s difficult to pick a favourite – there have been so many.

“A lot has changed over the years – some for the better, some for the worse. The price has gone up, there’s the smoking ban and only a few breweries own the lot now.

“But the foods better, they’re much more family friendly and the range of beers on is incredible.

“It’s no longer a speciality thing, being into your beers, you get such a choice. There’s always about four on no matter where you go.

“Although it may be a big surprise to people, we’re not massive drinkers. We just love pubs and everything about them.

“We have our own score cards which we fill in and we write the number of the pub on the card and ask the landlord to sign the book we have which has information in from every bar we go to.

“It turned from a bit of fun to a serious hobby. I’ll be doing this for as long as I can – I intend to visit every pub I can.

“The ones I like are the secluded ones, out of the way. There’s something a bit special about those. Around 20 tipplers were originally in the group but now only two remain including Peter, from West Bromwich, West Mids.

Every pub they visit is rated, photos are taken and information is noted down and BATs approval is a recognised accolade in the local pub trade.

The lads raise money for childrens’ hospitals along their way by asking each pub landlord they buy beer from to donate £1 to a deserving cause.

The Goose and Cuckoo Inn, Llanover, near Abergavenny, Wales. Number 13,302