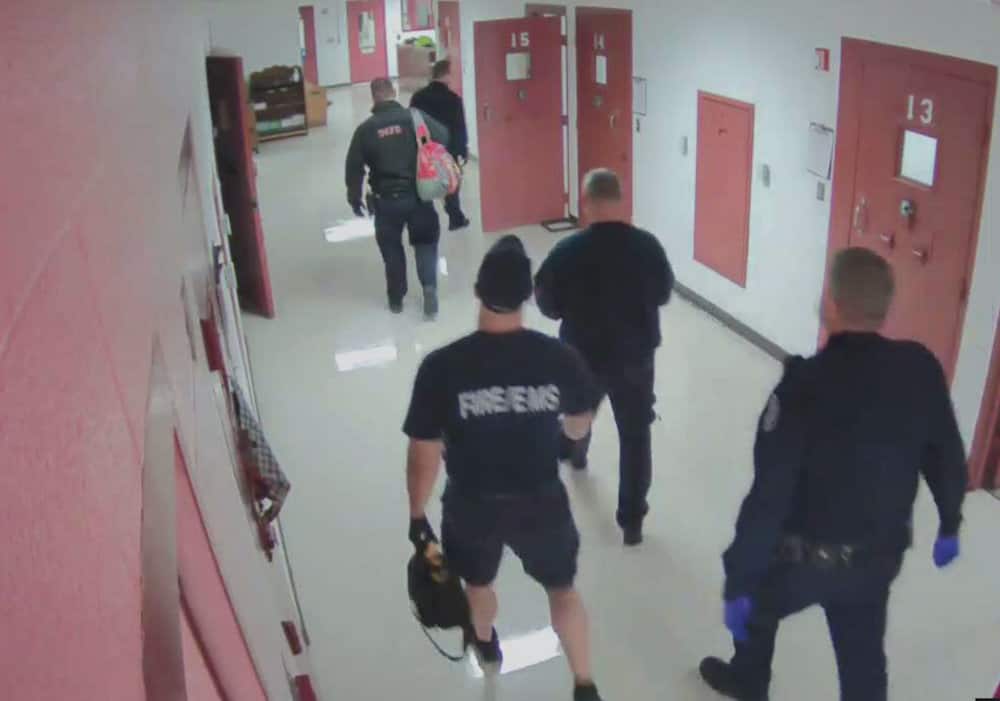 A black man who called law enforcement for help ended up dead in police custody – with shocking footage showing how officers put him in a chokehold and stood on him in a Tennessee jail, according to a new lawsuit.

Sterling Higgins, 37, died in police custody last March after he was allegedly pinned to the ground and choked for just under eight minutes and then shackled to a chair at Obion County Jail in Union City.

According to police records, Higgins dialed 911 on March 25, 2019, and told police that somebody was following him, wanted to kill him and steal his money.

Instead of being assisted, Higgins was arrested for criminal trespass and – after his death in police custody – one of his jailers was promoted.

Police had instructed Higgins to leave the convenience store but he officer Robert Orsborne returned and found him still there, he was arrested.

Higgins was taken to the Obion County Jail where this horrifying CCTV camera footage was filmed.

The videos, captured by two cameras, show Higgins staggering into the facility and grabbing at Mary Broglin, a female corrections officer.

Broglin pushes Higgins and when he pushes her back, officer Waylon Spaulding appears to tackle him to the ground.

Spaulding then appears to hold Higgins by the throat as Orsborne stands by.

At one point, Orsborne appears to stand on top of Higgins’s body.

Footage from a camera at the other side of the facility shows Higgins’ legs flailing before becoming limp.

The horrifying videos were submitted in a wrongful death lawsuit filed in federal district court in Tennessee by Higgins’ family.

The lawsuit alleges that Higgins was pinned to the ground and held by the throat for just under eight minutes.

All of the defendants have denied any wrongdoing.

In a handwritten statement, Spaulding said that Higgins had tried to spit at him, so “I… put my hand under inmate Higgins’s chin in an attempt to keep him from spitting on any other officers.”

Orsborne told investigators that he put a foot on Higgins’s leg and then stood on the leg shackles to restrain him.

The video appears to show officers dragging Higgins into a chair at 1.54am and spending just under five minutes chaining him to the chair.

At 2.01am, a jailer appears to check Higgins’s pulse.

Four medics arrive at the jail fifteen minutes later and Higgins is laid on the hallway floor as they attempt to resuscitate him.

At 2.21am, he is wheeled out of Obion County Jail on a stretcher and taken to a local hospital where he is declared dead at 2.52am – just over an hour after he arrived at the jail.

The Tennessee Bureau of Investigation determined that none of the officers involved were responsible for Higgins’ death.

An autopsy declared his cause of death as excited delirium due to a methamphetamine overdose.

However the autopsy also noted that Higgins had suffered multiple blunt force injuries including damage to his head, neck and torso.

None of the officers in the video were placed on administrative leave.

He told a local radio station that he was thrilled with the new role and looked forward to being a “mentor.”

“I’ll be an authority figure, but, hopefully, one the kids feel like they can trust and come to with whatever issues they might have.”

Spaulding was promoted in December 2019, eight months after Higgins’s death, from jailer to deputy.

The videos were released after three community activists submitted two Freedom Of Information requests when they became suspicious of the circumstances surrounding Higgins’ death.

Bobby Gordon, 35, Amber Freeman, 36, and Joshua Freeman, 34, said that they only received the video in October after multiple delays.

Joshua said: “When we heard about Higgins dying at the county jail, it immediately didn’t sit right, so we started asking questions.”

Bobby added that the medical report stating that an officer lay across Higgins’s body raised his suspicions.

He said: “We immediately knew something was wrong and when we read the initial report that confirmed our feelings.

“Something’s not right there – you don’t just lay across a man and he dies.”

She said: “I see a black murder.

“The video doesn’t have any audio but they had to have known that Higgins was fighting for his life.

“He was moving his body in any way that he could.

“For them not to be reprimanded and held accountable shows that they run this town the way they want to.

“Our hope is that they will be held accountable and charged.”

Higgins’ family have launched a civil lawsuit against, the county, Union City and four police officers over their alleged part in his death.

Obion County Jail told a reporter that they could not comment on Mr Higgins’s death or the officers involved due to ongoing litigation.