Flower Vision left the flowers outside a hospital 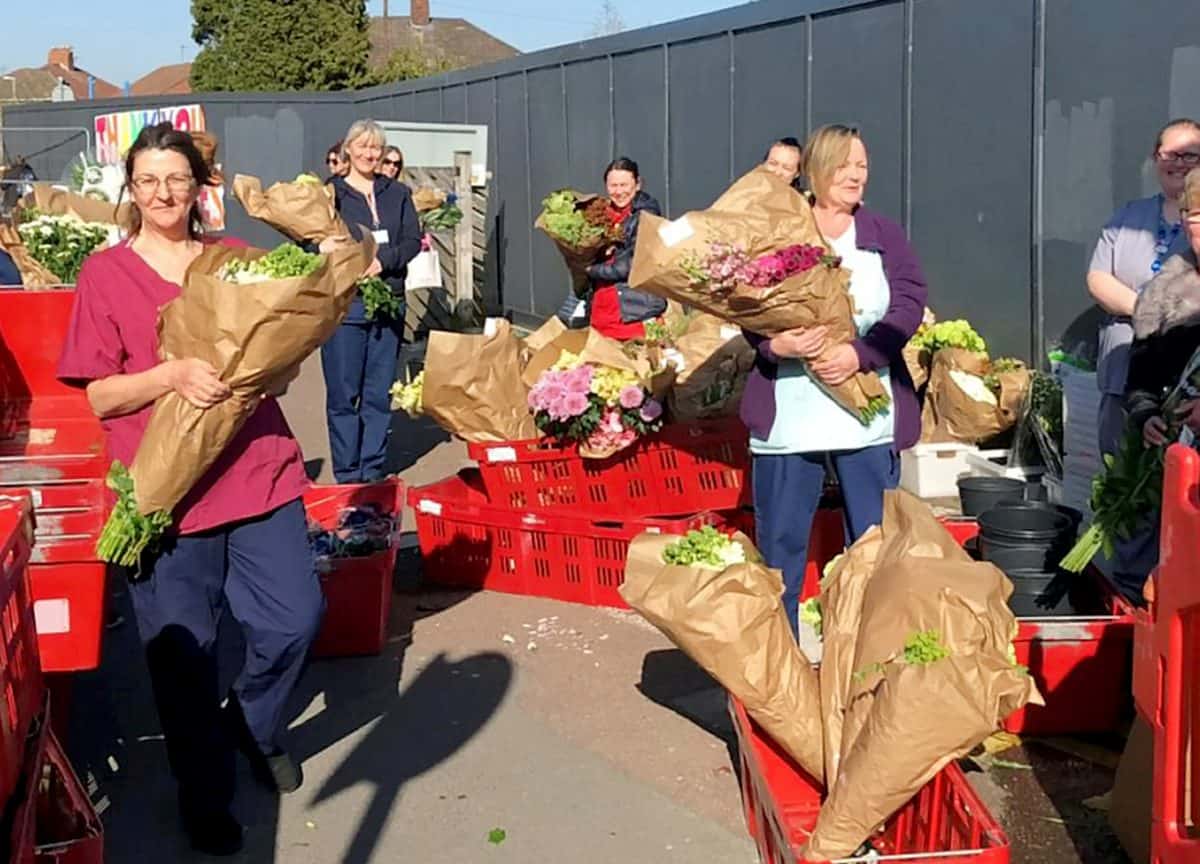 A flower wholesale business forced to close by the virus took all remaining stock to a hospital – to give thousands of bouquets to NHS workers.

Around 5,000 bunches that would otherwise have been thrown away were presented to doctors and nurses as a thank you for leading the fight against the virus.

They were part of a delivery sent to Flowervision Bristol on Monday morning just hours before Boris Johnson enforced its closure.

And instead of discarding them, the company – which supplies florists throughout the south west – bunched the £20,000 worth of flowers for a giveaway outside Southmead Hospital in Bristol.

The entire stock was taken by grateful medical staff within a couple of hours.

Tracy Ramsbottom, who is in charge of customer liaison, made the deliveries with the company’s co-owner Andrew Jones on Wednesday and said it was the least they could do to try and lift spirits.

She said: “We had so much stock left that we put our heads together and decided the best thing to do was give them to NHS workers.

“We have been hearing all the time about what pressures they have been under and we are aware of what they might face to come.

“One small thing we could do with all these lovely flowers was to take them up to the hospital and put a smile on their faces for a day. We put inside all the bouquets ‘You are all amazing’ and we just wanted to show how grateful we are for all they are doing.”

Flowervision Bristol is jointly owned by Andrew Jones in the UK and Krijn van der Spijk in Holland.

The company wholesales flowers to the entire south west and has a cash and carry business while also supplying individual florists.

Tracy added: “We have literally tens of thousands of stems every day. When the announcement was made on Monday night to close we already had an order on the way. We arranged for customers to collect things they had committed to and then had about £20,000 worth of flowers left at wholesale.

“We decided that rather than thrown them in the bin, we would give them to the NHS as a little boost to the staff and wanted to say thank you.

“We set up a production line to bunch them into bouquets and Andrew and I went up to Southmead to give them out.

“We wanted to do it with as little as disruption as possible so stood at the gate and they came to collect them.

“We had an amazing reaction from them. There were probably about 5,000 individual bunches. They were collecting them at the end of the shift and some were telling colleagues who also came and got them on behalf of others.

“They were so surprised that some even offered to pay. Some took them for vulnerable neighbours as well while others came to take them to dish out on their wards.

Tracy said the business was in a strong position to start up again when they are able to but hoped their clients – many of them individual florists – would be able to ride out the storm.