Stepdad-of-three Harry Lay, 36, told how rising oil costs forced him and wife Kittie, 36, to rely on food banks to feed their kids - despite both having jobs. 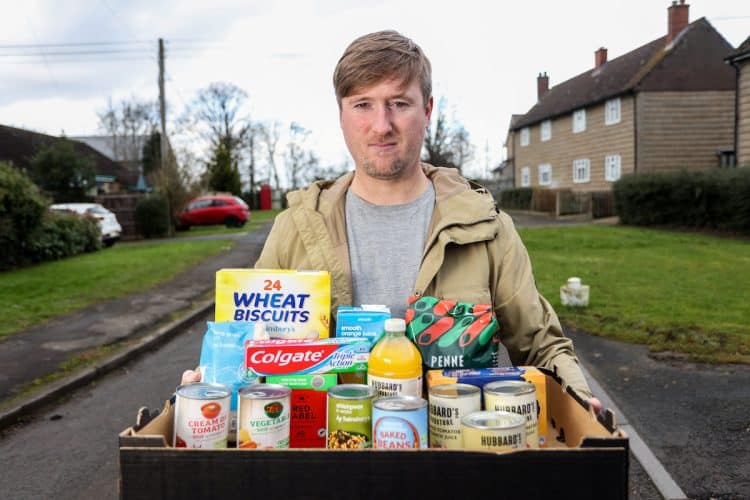 A family who had to choose between heating and eating after bills soared were delighted when an anonymous stranger delivered 500 litres of oil for their tank.

Stepdad-of-three Harry Lay, 36, told how rising oil costs forced him and wife Kittie, 36, to rely on food banks to feed their kids – despite both having jobs.

Harry, from Cricklade, Wiltshire, spoke out last week after it was announced cost of living had risen at its fastest pace in nearly 30 years in the 12 months to December.

He was gobsmacked when an anonymous stranger sent 500 litres of fuel – enough to heat their cold home for up to three months – to their home.

The mystery deliver came just days after their tank had run dry – and the parents “wanted to cry” at the kind favour.

He said: “These days, we don’t have a single penny spare, not even down the back of the sofa – and our oil had just run out.

“We have been in complete and utter despair since the prices started to rise.

“So we were very confused when the truck turned up and started filling our tank.

“I told them they’d got the wrong house and we hadn’t been able to refill it, but I was told ‘it’s definitely for you’.

“We both just wanted to cry at the time – we couldn’t believe it.

“We have no idea who it was, but we can’t thank you enough.”

Back then, they would pay £150 to fuel their oil-powered central heating for three months.

But Harry said his heating costs began to creep up last year after Ofgem announced a cap was raised by 12% on energy tariffs – and from October, the cap rose by £153 per year for anyone not on a fixed-price deal.

Now Harry, who was a soldier with the Royal Household Cavalry until 2012, said the same amount of oil now costs £380.

“It was hard enough to rustle up the money to fill our oil tank anyway,” he said. “And now £400 is near impossible to find.”

He and hairdresser Kittie have been visiting food banks every week for months to help cover the rising costs – and they say their focus is ensuring the kids are “warm and fed”.

He said: “Our oil had run out a couple of days ago and we hadn’t been able to get the tank filled up again.

“But then a truck turned up and started to fill it for us – we were so confused and thought they were at the wrong house.

“I told them they had the wrong house, and was told ‘no, this is the address – it’s definitely for you.'”

Harry said nobody from their family has owned up to it – leading him to believe it was the work of kind strangers.

And he plans to continue campaigning for change in the hope that one day, he can pay the favour forward and help someone else.

He said: “Whoever did that for us, we can’t thank you enough.

“We both just wanted to cry with happiness at the time.

“It’s my goal to continue this campaign because it’s not just me pleading poverty – this is the reality for millions of others and I want to see real change.

“I want to pay the favour forward and work to help others in our position, like someone did for us – this shouldn’t have needed to happen.

“We are both working, and receiving Universal Credit, and we still can’t afford to buy food for the family – just not sustainable.

“Everyone is feeling the pinch, but it affects those at the bottom the most.

“If we all just shut up and put up, nothing will ever change.”