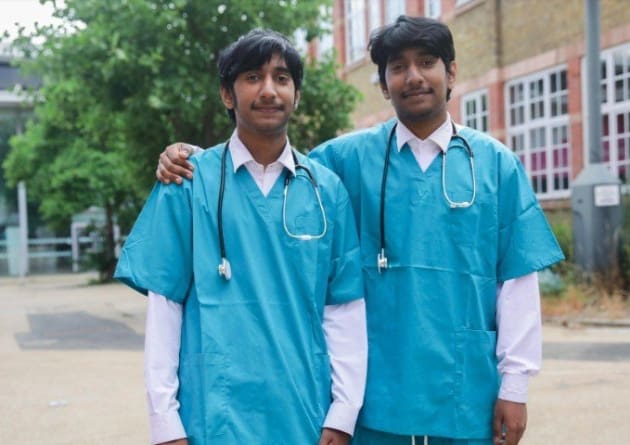 Dozens of students at a college in a London borough hit hard by coronavirus have won places to study medicine at top universities after being inspired by the “heroics” of NHS staff during the pandemic.

They include identical twins Emmanuel and Edoard Beltazar, both 18, who barely spoke a word of English when they moved to the UK from Italy just four years ago.

The pair are due to take their place on the same medicine course at University College London in September.

Emmanuel said: “It has been incredible watching the scenes on the television of what these immensely brave people in the NHS are doing every day.

“People who live in our neighbourhood and from our ethnic background, which is south Asian, have been very badly affected. It makes the whole thing so much more personal.

“It is frustrating because if this had happened in five years’ time, me and my brother could be there on the front line helping. It will be such a proud moment for us when we finally join the NHS.”

Edoard added: “When there are people dying in your neighbourhood, on your street, it is very close, very scary. Never has the world needed doctors and nurses and other frontline staff so much.

“They are heroes and we want to be just like them.”

Newham has the second worst Covid-19 death rate in the country with 196.8 deaths per 100,000 people. It is also the borough with some of the highest poverty levels in the UK and one of the most ethnically diverse.

She said: “At times it has had me in tears overcome with emotion. Newham is an area which has been really badly affected by the pandemic.

“There are high levels of social deprivation and a large number of BAME residents and multi-generational families living under one roof.

“The work the doctors and NHS staff are doing to help people is so inspiring. These people are my heroes, I want to be like them.”

Newham Collegiate headteacher Mouhssin Ismail grew up in the borough and gave up a six-figure salary as a City lawyer to become a teacher in his old neighbourhood in 2015.

He said: “In many ways I understand the instinct of these young people. They have seen great pain inflicted upon their community and want to do something to help.

“The reason I quit my job to become a teacher was because I felt there was a tremendous amount of potential going to waste.

“When it is your community, your friends, your family being affected you cannot help it feeling personal.

“I am incredibly proud of our students’ achievement and I know they will go on to make a significant contribution to the NHS.”