Magid Magid, 29, the youngest ever Lord Mayor in his native Sheffield, South Yorks., is nothing like its first 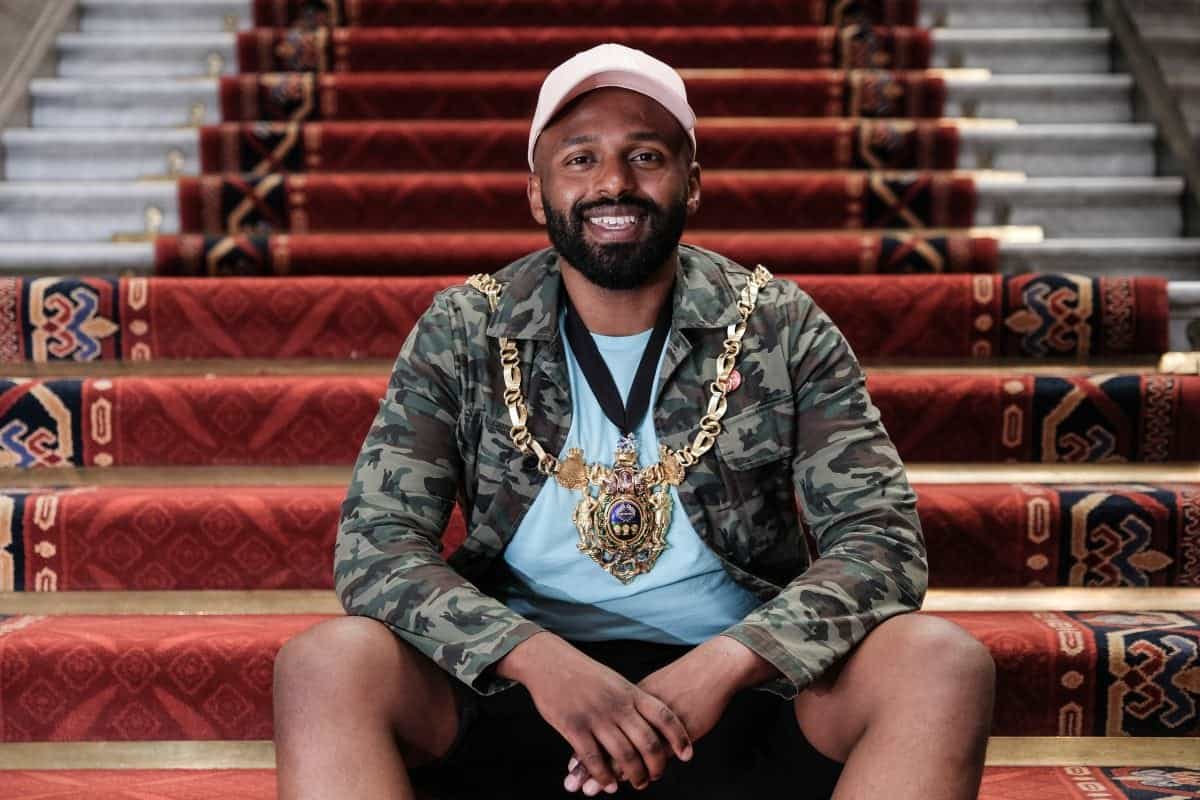 UPDATE: Magid Magid has won a seat in the European Parliament for the Green Party. “We did it. Today is about a Green Wave cascading through Europe & landing on the shores of Yorkshire for the first time. We’re just getting started,” he tweeted at the news.

Meet Britain’s coolest Lord Mayor – a 29-year-old Somali refugee with an outlandish dress sense who is causing a bit of a stir in the council chamber.

Magid Magid shattered the conventional image of a civic dignitary when he became the youngest person ever elected to the historic post of Lord Mayor of Sheffield earlier this year.

Rather than just posing for photos and cutting ribbons, the ‘Right Worshipful’ Magid has caused a rumpus with controversial statements when he is supposed to be neutral.

Speaking in support of Mexico, the Green Party councillor and former digital marketing consultant then ‘banned’ Donald Trump from visiting Sheffield during his UK trip.

The hell-raising mayor – who was given his sombrero by Sheffield’s Mexican community – will be marking tomorrow’s visit by giving speeches at an anti-Trump rally in the city. 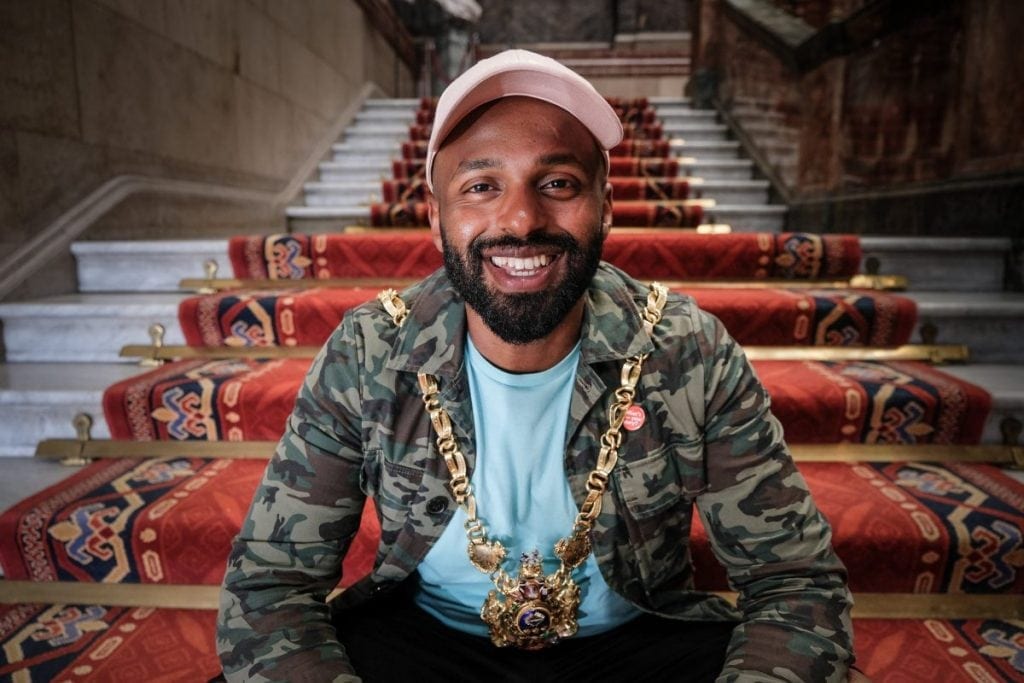 After renaming tomorrow (Fri) “Mexico solidarity day” he will also be making speeches in support of Mexico.

Magid remains defiant over his Trump ban, branding Trump an “insult” to the city.

He said: “By welcoming him we legitimise everything he stands for.

“What I’ve done it to highlight that he is an insult to Sheffield – a city which is known for standing up for human rights.”

Since his statement Magid has been slammed by members of the public and fellow councillors for outreaching his own powers by seeking to ban a world leader.

He said: “Of course I don’t have the power to ban anyone – though I think 99 per cent of people seem to think I have.

“The language I used during that speech was to take the p*** out of Donald Trump.”

Magid, a practising Muslim, has also raised eyebrows in the council’s austere, wood-panelled chamber by posing for photos dressed in camo gear and baseball caps.

Bu the antics of the Zoology graduate have prompted criticism from some councillors who accuse him of tarnishing the reputation of the 175-year–old civic office.

Now a 5,000 signature petition has been raised calling for his resignation.

However Magid remains unrepentant about his behaviour and says he is proud to have been elected to the ceremonial post – one of just 25 in England and Wales.

He says his mother, four sisters and one brother are proud of his achievement and think it’s “cool”.

He said;”I think what people are annoyed about is that I’ve managed to make the role of mayor into a powerful one with a lot of influence. 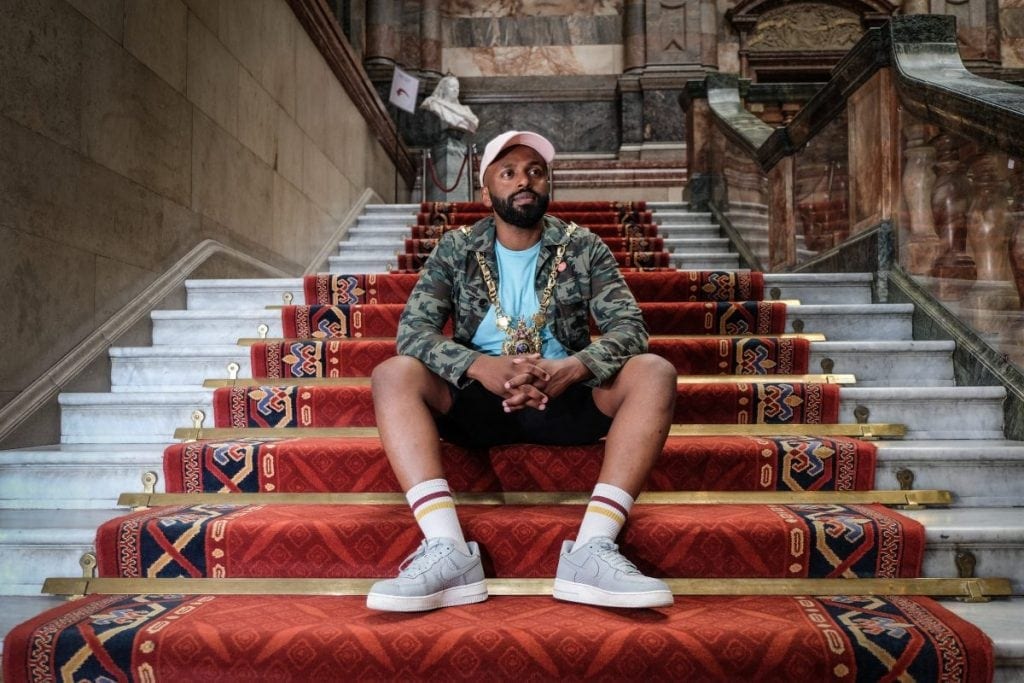 “But now people are talking about Sheffield for all the right reasons.

“I know all mayors are supposed to do is cut ribbons but how do they really promote a city?

“I will literally do whatever I can to get people talking about Sheffield around the country.

“Others councillors are telling me to stop being political but I’m just going to keep pushing and it’s tough.”

Magid grew up in Sheffield’s inner-city Burngreave area – supported by his mother who struggled to learn English and worked as a cleaner.

Magid, who admits he had no real political ambition, said he went into politics “because I was tired of complaining”.

He said: “I thought if you don’t do politics, politics ends up doing you and I wanted to play a part in my community.”

Since his Since his announcement while chairing a packed-out city council meeting last week Magid has been on the receiving end of a ferocious public backlash.

An online petition with more than 5,000 signatures accuses him of “bringing the office of Lord Mayor into disrepute” and calls for his removal.

Signatories posted comments explaining their reasons for supporting the petition.

Clifford J wrote (SIC): “A total disgrace to the role of mayor and the duties that position holds. An embarrassment for the Yorkshire county.”

Dean M wrote (SIC): “I don’t think he realises what a responsible position he is in.. .. “His dress code is a joke”.

He has also received disgruntled tweets from America’s National Rifle Association and several US Republican congressmen.

Lord mayor roles are seen as ceremonial posts, with few or no duties attached to them. 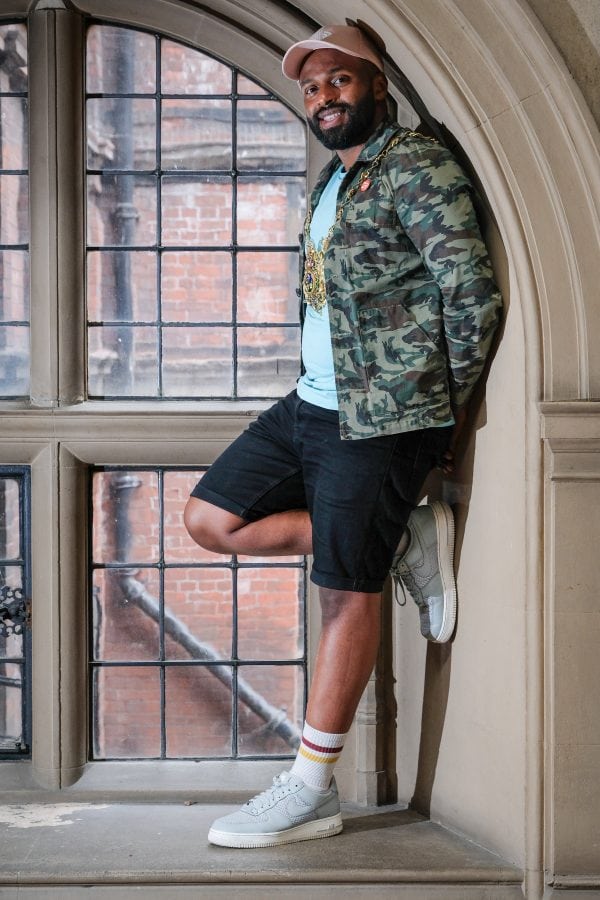 However Magid, who admits he has no realistic ambition of entering politics when his year in office ends, has put a few noses out of joint by being quite opinionated.

He said: “What p***** me off is people saying ‘you don’t speak for us’ – in my opinion these are just racist people hiding behind tradition.”

However the unorthodox mayor maintains that the majority of Sheffield people and others across the world are supportive of his unusual style.

He said: “It’s easier to focus on the negative stuff but it’s more positive than negative by a country mile.

“The day after the council meeting I went to a school in Sheffield and two of the students were wearing sombrero hats.

“I’ve had George Takei from Star Trek and Mark Hamill from Star Wars supporting me on Twitter.

“Every time I go out in Sheffield the amount of people running up to me saying ‘we think you’re amazing’ is insane.

“And it’s not just young people – older people are supporting me.”

When his year draws Magid says he has no clear idea where life will take him.

He said: “A lot of my friends want a job with stability but that just doesn’t excite me.

“As long as I’m pushing myself out of my comfort zone I’ll be happy.”