The cockapoo, named Bertie, was left in the car with no windows open and in direct sunlight in a multi-storey car park in Saffron Walden, Essex 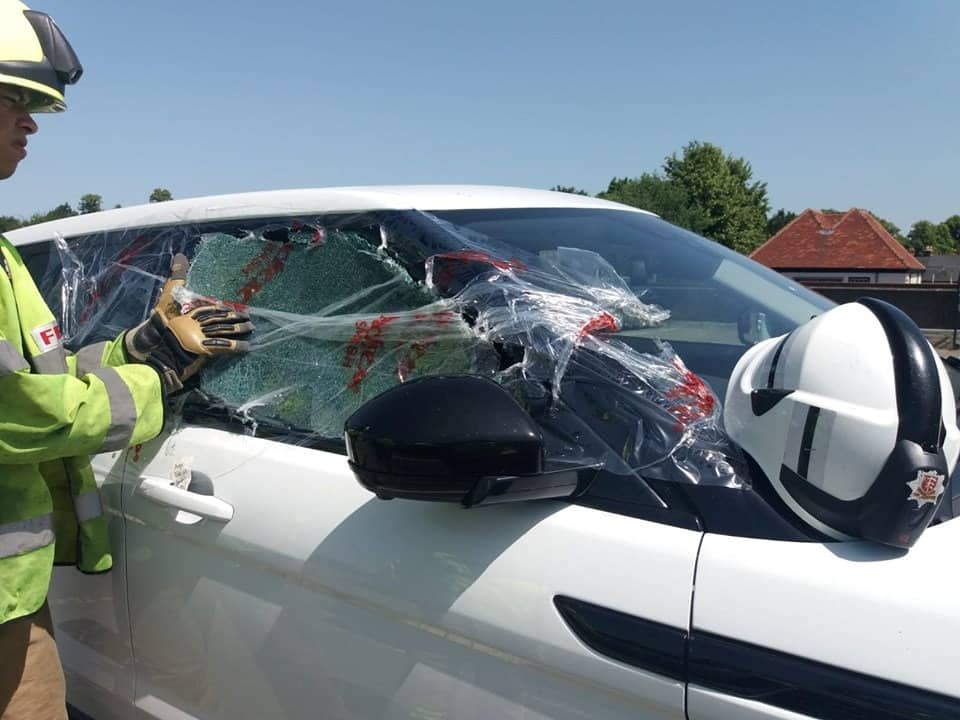 A poor dog was saved from a sweltering hot car by the fire service – as a sizzling heatwave engulfed the country.

The cockapoo, named Bertie, was left in the car with no windows open and in direct sunlight in a multi-storey car park in Saffron Walden, Essex.

Firefighters are warning to never leave dogs in hot vehicles are they were forced to smash open the vehicle window.

The “distressed” pooch was left in a car which was parked in direct sunlight with no open windows on Friday (28/6) as temperatures were reaching 25 degrees.

A member of the public spotted the dog and called the fire service who said police had been informed of the incident as the dog’s owner had been shopping at a local Waitrose.

Saffron Walden Fire Station shared pictures pictures of the car and pooch to warn people of the dangerous consequences leaving a dog in the car can cause.

The post read: “Today we rescued a Cokerpoo Dog called Bertie from the top deck of Waitrose multi story park car in SW by breaking a window to release him.

“The dog was in distress due to the intense heat within a parked car in direct sunlight with no open windows.

“Please always keep your pets welfare and safety in mind particularly during this hot spell.

“With the recent high profile incident in Saffron Walden we are surprised the message is still not getting through when it comes to leaving children and pets in hot vehicles.

“Thankfully Bertie survived to tell the tale! We thank Waitrose staff for their support with trying to help locate the owner and for providing much needed water for Bertie. The incident has been reported to Essex Police.”

Essex police said: “We were called at around 12.15pm yesterday, Friday 28 June, with concerns about a dog in a vehicle parked at Waitrose, in Hill Street, Saffron Walden.

“Entry was forced to get access to the animal before the dog’s owner was located.

“He received words of advice before becoming unwell and receiving care at the scene.”

According to the RSPCA, Britons could end up with a criminal record if something happens to their dog after it’s left alone in a car.

It is not illegal to leave a pet unattended in a vehicle.

But if the animal becomes ill or dies as a result, you could be charged with animal cruelty.

If convicted under the Animal Welfare Act 2006, drivers can be jailed for six months and slapped with an unlimited fine.

People for the Ethical Treatment of Animals (Peta) said: “If you see a dog left alone in a hot car, take down the car’s colour, model, make, and license plate number.

“Have the owner paged in the nearest buildings, or call local humane authorities or police.

“Have someone keep an eye on the dog. Don’t leave the scene until the situation has been resolved.”

It was just last week a toddler was dramatically rescued from a hot car after being left alone for more than an hour in scorching temperatures in Saffron Walden, Essex.

The boy, thought to be around 18 months old, was freed after a passer-by heard him crying from inside the locked vehicle.

Fire crews finally released him by smashing a window and pulling him from the 4×4, which had been left in a car park .