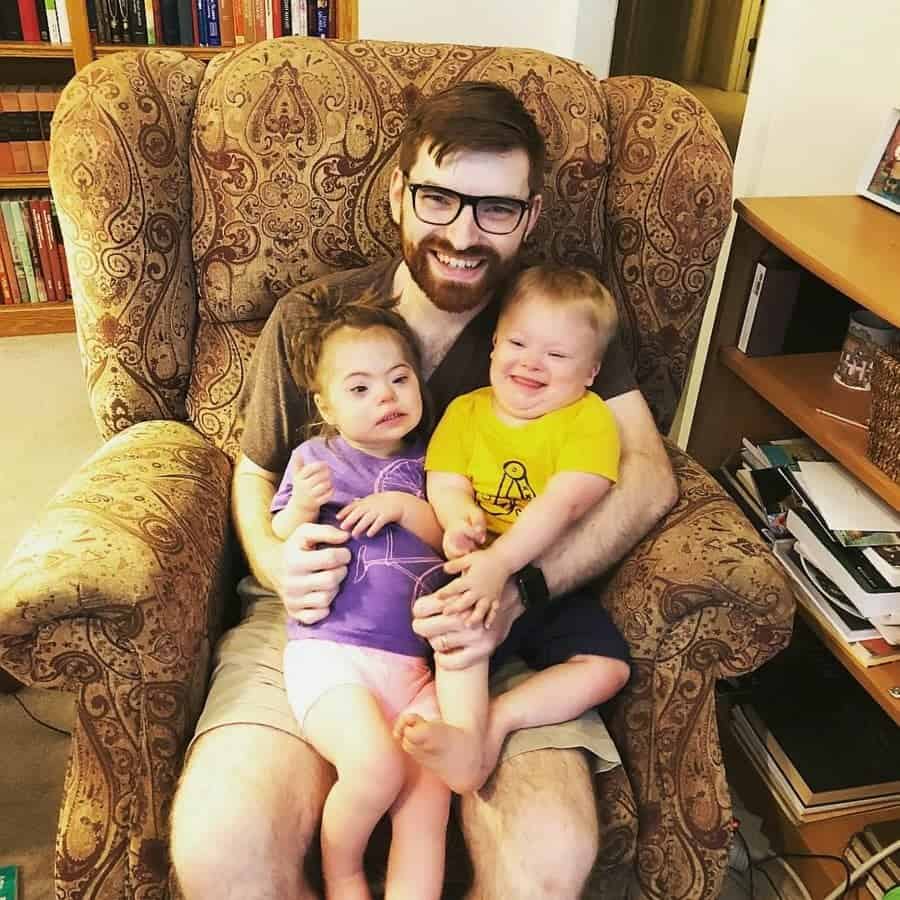 A big-hearted couple whose daughter was born with Down Syndrome selflessly adopted another toddler with the condition.

Allison and Andrew Sweatman adopted Beau, then aged three – a big brother for their daughter Rosie – because they no longer found special needs parenting “scary”.

The husband and wife said they were initially daunted when a 20-week scan revealed Rosie, their first child, had Down Syndrome and was suffering from a heart defect.

The diagnosis flipped their world upside down, forcing them move home to Cabot, Arkansas, US, from China, where they had been working as teachers.

Full-time blogger and podcaster Allison gave birth to Rosie via emergency C-section at 37 weeks and the tot went on to spend the first year of her life in and out of hospital.

She underwent major heart surgery at three months, suffered seizures and was diagnosed with craniosynostosis, a condition where bones in the skull fuse together prematurely. But gradually her health improved and her proud parents said they were finally able to “enjoy and celebrate” their daughter, who began pre-school last September.

They said that watching Rosie, now three, overcome her battles and thrive with Down Syndrome made them realise that they were no longer intimidated by the disorder.

They began looking in adopting another child with Down Syndrome because there is a shortage of suitable homes for kids with special needs.

Then last November, a friend introduced them to Beau, now four, and Allison said the connection was instant. The mom-of-two said: “It was so hard with Rosie at first because we were not able to focus on really any of the things a typical parent gets to focus on.

“We weren’t really able to relish the first year of life because we were completely focused on very very serious health issues.

“Since then there has been an improvement all around and for the first time we felt like we were really able to just enjoy her and celebrate her.

“The biggest thing was that we had seen our daughter overcome so many obstacles and so many great perils that we knew that something like Down Syndrome – this extra chromosome – was no longer scary to us.

“There was a time that the diagnosis was scary and hard for us to hear but after seeing everything Rosie had gone through in the first two years of her life, we opened ourselves up to it.

“Then we heard about Beau.”

Beau was born to a couple who loved him dearly but felt his needs would be better met by a family who already had a child with Down Syndrome, Allison said.

She and Andrew chatted constantly with his birth parents before meeting them at Legoland in November 2017.

“When I first held Beau there were so many emotions and I knew him becoming my son meant his birth mom sacrificing greatly for us to have him in our family,” Allison said. “We definitely had an instant connection with him, especially my husband.”

Watching Beau and Rosie – who are both non-verbal – hit milestones and develop a close bond with one another has been “incredibly rewarding” for the couple.

Allison, who blogs at aliswholelife.com and hosts the podcast, Oh, So Extra, added: “We are just like a lot of other families but I absolutely recognize that we are also incredibly different from the outside looking in.

“We do get people staring at us or asking questions, but it is just a part of our life.

“Being a mom of two children with Down Syndrome is incredibly rewarding.

“It’s most rewarding when I see our kids working so incredibly hard for milestones and to see them surpass our expectations of them.

“It makes all the really hard days worth it.

“It’s not an easy journey, but it’s certainly a privilege to be part of.”

Andrew, a web developer, said: “When I first learned of Rosie’s complications, I felt intense anxiety and fear.

“If I could send my former self a message in that moment, it would say: ‘Take a deep breath. Your daughter is so much more than her diagnoses.’ “After we learned so much about Rosie and her medical complexities, we realized that heart and brain problems were scary to us, but Down Syndrome wasn’t.

“We always knew we wanted to adopt, so when it came time to think seriously about it, it didn’t make sense for us to rule out any potential matches based on their chromosomes, especially since there is such a need for special needs adoption.

“When we really thought about that, we realized we could and should actually seek out a child with Down Syndrome. I’m so glad we did.”