Doctors, nurses and 111 callers, working around the clock and unable to get basic supplies, faced 600 metre queues at a Tesco this morning (Sun), with no social distancing measures. 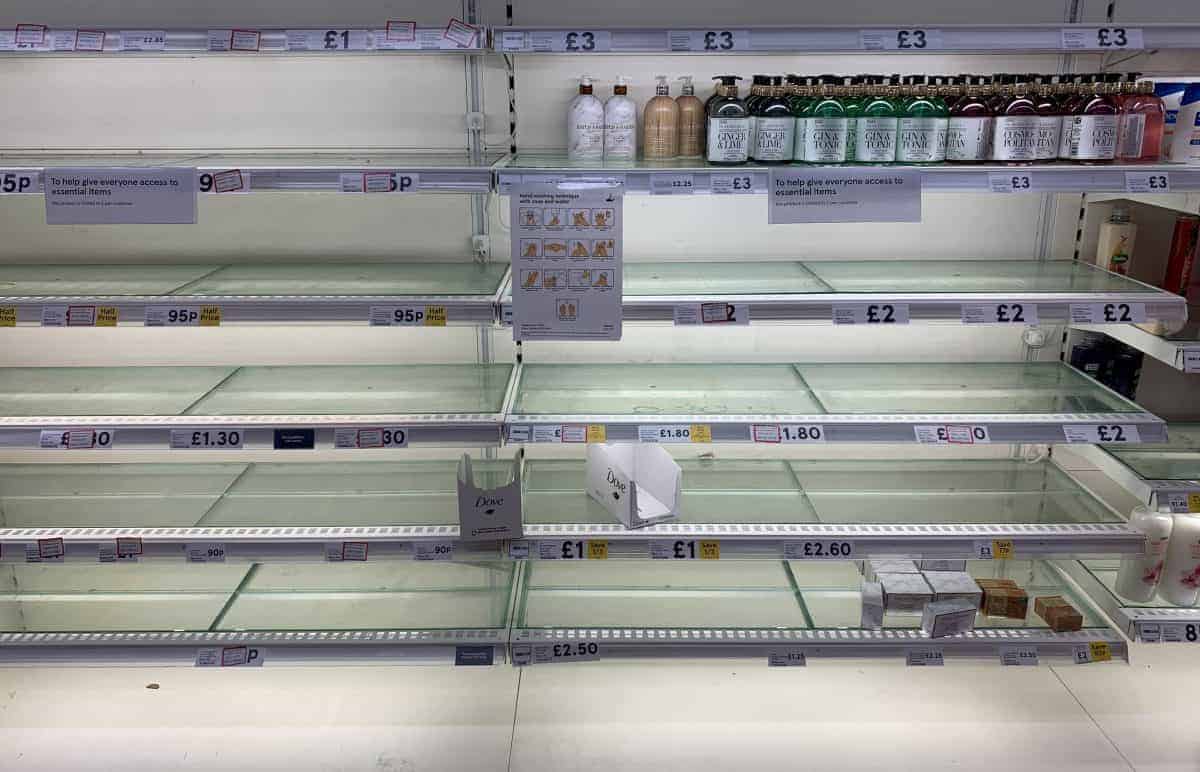 Selfish shoppers pretended to be NHS workers during an early shopping hour for medical staff, in a bid to beat the queues during the coronavirus pandemic.

Doctors, nurses and 111 callers, working around the clock and unable to get basic supplies, faced 600 metre queues at a Tesco this morning (Sun), with no social distancing measures.

Customers who were not entitled to the extra hour tried to sneak past security staff and jump the queue in a bid to get in early at a Tesco Extra in Gallions Reach, east London.

One family argued with security staff and rammed their trollies into the barriers when their attempts to join the NHS shopping hour failed.

The large supermarket is one of many Tesco stores offering a dedicated shopping hour for NHS workers who were asked to show their badge upon entry – and offered a free bouquet of flowers for Mother’s Day.

NHS workers praised Tesco staff for their efforts but raised concerns that hundreds of medical professionals, including those treating Covid-19 patients, were queuing at close proximity.

Nurse Francesca Hamilton arrived at the store at 9am but left the queue to help Tesco staff manage the crowds and said she was surprised at such behaviour.

The 47-year-old sexual health nurse, from Marie Stopes International, said: “I am surprised people have tried to jump the queue. It’s unbelievable.

“Now is the time for people to look after us so that we can look after you but they are not listening.

“Tesco staff are doing their best but there are too many people so I decided to come out of the queue and help.

“I have not done my shopping yet. I have been here since 9am but I live nearby so I will do mine later.

“If people respect the government’s advice that they have set out for NHS workers then it would be fine but people are not following that.”

Tesco security guard Westy Westfield said the new opening hours are helping NHS workers but that selfish shoppers were still trying to sneak in and beat the queue.

The 53-year-old said: “The new measures are working for NHS staff and that is what we need to think about right now.

“We are going to need them to be healthy. The best thing is to let them be able to get their shopping but nobody wants to wait.

“Members of the public are still being selfish. I have been working here for five years and it is the same people.

“People are trying to jump the queue and sneak in or are pretending to be NHS workers when they are not.”

Many healthcare professionals praised Tesco’s new initiative and showed their appreciation towards staff but said vital improvements needed to be made.

GP Dr Amit Sharma was approximately the 600th customer to enter Tesco today and called for Sunday trading hours to be temporarily lifted.

He said: “Tesco staff have been brilliant in stocking up the shelves and it is a good initiative. But I am fed up with the national guidance. It is not what the front line people actually want.

“People were queuing at the check outs which cannot begin trading until 11am. These rules should be lifted, just for the time being.

“I am concerned we are all NHS workers, queuing in close proximity to get into the store and to pay at the check outs.

“I work Monday to Friday and have been working all weekend too due to an increase in demand with coronavirus.

“They should lift Sunday trading hours to help reduce queues, make it more clear which stores are participating, and maybe introduce one hour in the afternoon for NHS workers, for those who work shifts.

“Also, if there were more days for us to come here during the week, we would not all struggle coming here all jumping in at the same time.”

Ambulance driver Stacey Wyss, who received a free bouquet of flowers for Mother’s Day, praised the initiative but said basic supplies were still out of stock.

The 32-year-old said: “Everybody still came with their families and they did not have a badge. It is a good initiative but there was still no pasta, no rice and no toilet roll.”

NHS admin worker, Linda Johnson, raised concerns of other supermarkets that have introduced shopping hours for NHS workers and elderly customers at the same time.

The 42-year-old, from St Thomas’ Hospital, said: “Some supermarkets are doing early opening hours for NHS staff and for the elderly at the same time.

“It is putting both the NHS workers and the vulnerable elderly people at risk.

“Here it also needs tweaking. You have a large percentage of NHS workers coming together, who have potentially all been at risk, and there is no social distancing.

“We are all from different hospitals, playing different roles and potentially all cross contaminating.”

A 111 worker, who did not wish to be named, praised Tesco for the new measures but said entry should be restricted to one person per NHS badge to reduce entire families panic buying under one badge.

The 47-year-old said: “The whole idea of doing this is fantastic and I am grateful to Tesco workers who have restocked the shelves but there are still some people who are stock piling which I think is disgusting.

“Only the person that holds the badge should be allowed to come into the shop, or two people in special circumstances. Right now, you have whole families shopping under one person’s NHS badge.

“I used to work six or nine hour shifts but I have been doing 12 hour night shifts every day to keep up with demand due to the cronavirus.

“We do not get time to come to the shops and when we do, there is no food.

“We got here at 8am this morning but we could not go through the check out until 11am so we stood here for three hours. It is not a conducive use of our time.

“I am off today but if I was working a shift, I would not have been able to wait and pay.

“So maybe the government could also allow Tesco to lift trading hours just for now, for NHS workers and for the vulnerable.”

Regular shoppers, who also arrived at the supermarket early, were enraged when they reached the front of the queue and realised they were stood in the wrong line.

Others raised concerns that vital supplies would not be left on the shelves for when they were allowed in at the store’s usual 11am opening time.

Mohammed Islam, who has a newborn baby, said: “The NHS staff deserve this, they are working so hard. But supermarkets should also consider people like me.

“I have a newborn baby. I have run out of milk for her and there might not be any left on the shelves when we are allowed inside.”