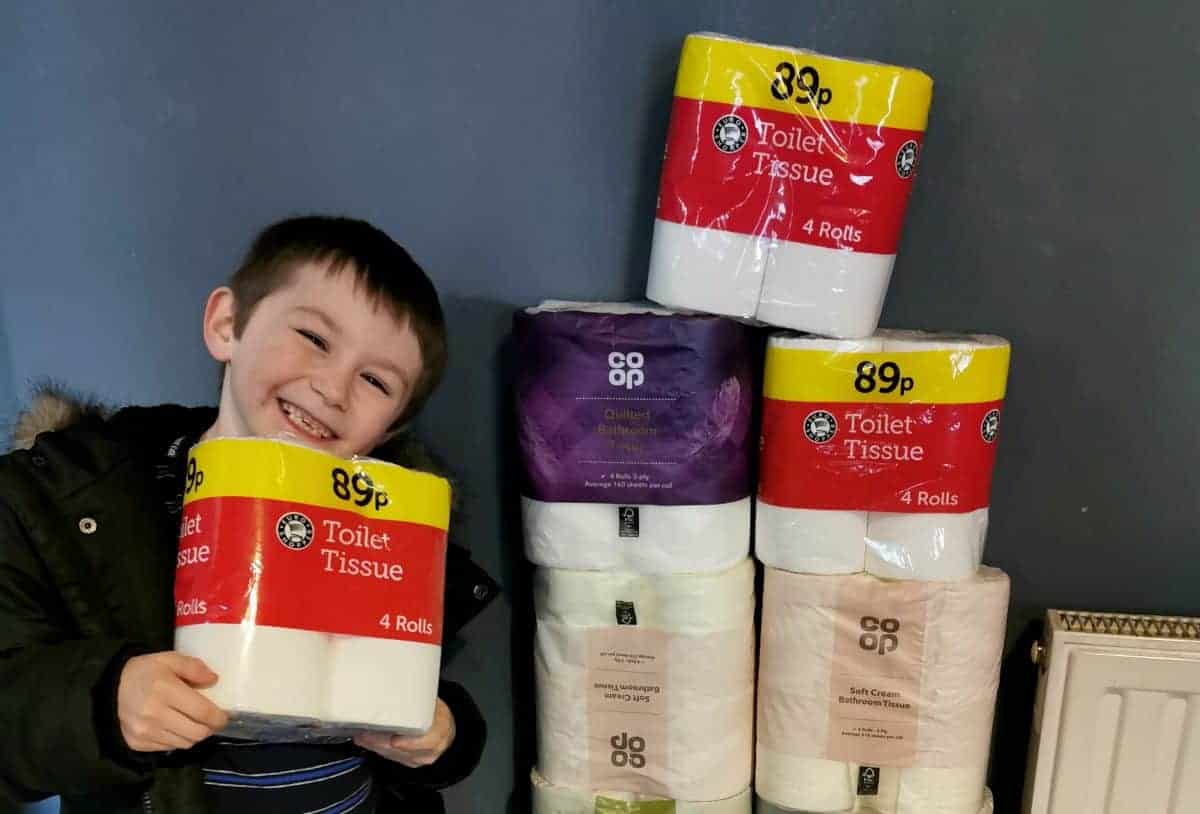 Jimmy-Dean Hudson, seven, spent his precious pocket money on toilet paper for the elderly in his home town of Westcliff in Essex.

His mum Tracy went along with him as he delivered around 70 loo rolls to their nearby elderly residents.

Tracy said: “We went to the supermarket on Sunday and there was no toilet roll in sight.

“We then visited our local shop that had loads and Jimmy-Dean just said ‘Mum, lets buy lots and give it to the people who need it the most.’

“We got home, he packed a festival trolley with the loo roll and we headed out.

“We met some lovely elderly people who were taken aback by his kind gesture.

“One elderly man in his 80s was telling us how worried he was and how in the war they didn’t have this panic buying and communities pulled together to help and not be greedy.

“Jimmy-Dean has used his own money to fund this – he doesnt get a set amount just as and when.

“He does have some pocket money left but its going towards his next idea of buying snacks and drinks for local paramedics at Southend Hospital.

“I’m super, super proud of him, and he really has put smiles on many faces.

”All of his family, friends and school teachers are so proud of his kindness.”

In Cirencester., Glos, two chip shops are both offering a delivery service aimed at vulnerable and elderly customers.

The Friar Tuck on Dyer Street and Malt and Anchor on Castle Street are offering to help.

Malt and Anchor will be offering their online service for £1.95 between Thursday and Saturday, whereas The Friar Tuck will be running their free phone service from Monday to Thursday.

Although both businesses are fish and chip shops, they will also be offering basic essentials such as toilet roll and pasta.

A spokesman for The Friar Tuck said: “The Friar Tuck are very aware that many people will be worried about the coronavirus in the UK, and some of our vulnerable and elderly customers have come to the decision to self isolate themselves to avoid infection.

“Taking this into consideration we have decided to extend our delivery service until further notice during the hours of 5.30pm to 8pm Monday to Thursday.

“Along with this, we are willing to collect for those in need any basic food essentials on their behalf too at the same time of their delivery.

“We will be giving out leaflets in the shop to our elderly customers with the details on.

“Please do not use this service unless you really need it.”

Malt and Anchor will be running their service from Thursday to Saturday between the hours of 5.30pm and 9.30pm.

Residents will be able to order a six pack of luxury toilet roll priced at £1.89, as well as the more traditional fish and chips.

Malt and Anchor are also asking for residents to get in contact with any items they would like to see added to the service, such as pasta, which is currently out of stock in most supermarkets.

Recruitment consultant Jonny Burnett, 23, has offered to prepare and deliver meals to the vulnerable and the isolated.

The meals will be free and he is currently relying on donations to help him on his way.

He said he was only going to do it for close family members where he lives originally but then his post ‘absolutely spiralled’.

“The reason I want to do it is because people need support. People are going to suffer. We can check up on them – it seems the right thing to do.

“I hope we can make people feel less lonely and to show people that we care.

“It is building a sense of togetherness. As far as I see it, without being dramatic, it is helping to keep people going. We are only at the beginning of this so having a bit of good news is quite pleasant.”

He said he is currently out of pocket from getting the scheme going. Originally he planned to do everything from his home until a local pub got involved and told him he could use its kitchen.

Mr Burnett lives in Claverham, a village near Bristol, and posted to Facebook that he would drive within a 25 mile radius to deliver the meals, which are all free.

His post said: “As I have a refrigerated van sat on my drive, I will be cooking trays of homecooked meals and delivering them to anyone who is vulnerable, or isolated.

“This is not to make money, this is not to look good, I like to cook, and people need to eat – obviously anything towards the ingredients would be met with appreciation.

“Please do not be to [sic] proud to ask, I have access to fruit and veg markets, and I am more than happy to create some wholesome meals for people to enjoy in their homes.”

All the meals will be healthy and most will be vegetarian as much as possible. They will also be locally sourced where possible.

Mr Burnett became the youngest chef in the UK to open a restaurant when he launched the Post Box Eatery in December 2015.

He is crowdfunding for his service here: https://www.justgiving.com/crowdfunding/rcmdeliveries?utm_medium=email&utm_source=ExactTarget&utm_campaign=20200317_114094&fbclid=IwAR1ETcuvyeci0cLR8_P6zqQHsyVne_I7G152uzJQdp5WTzn4pyx4Xpqs7jk