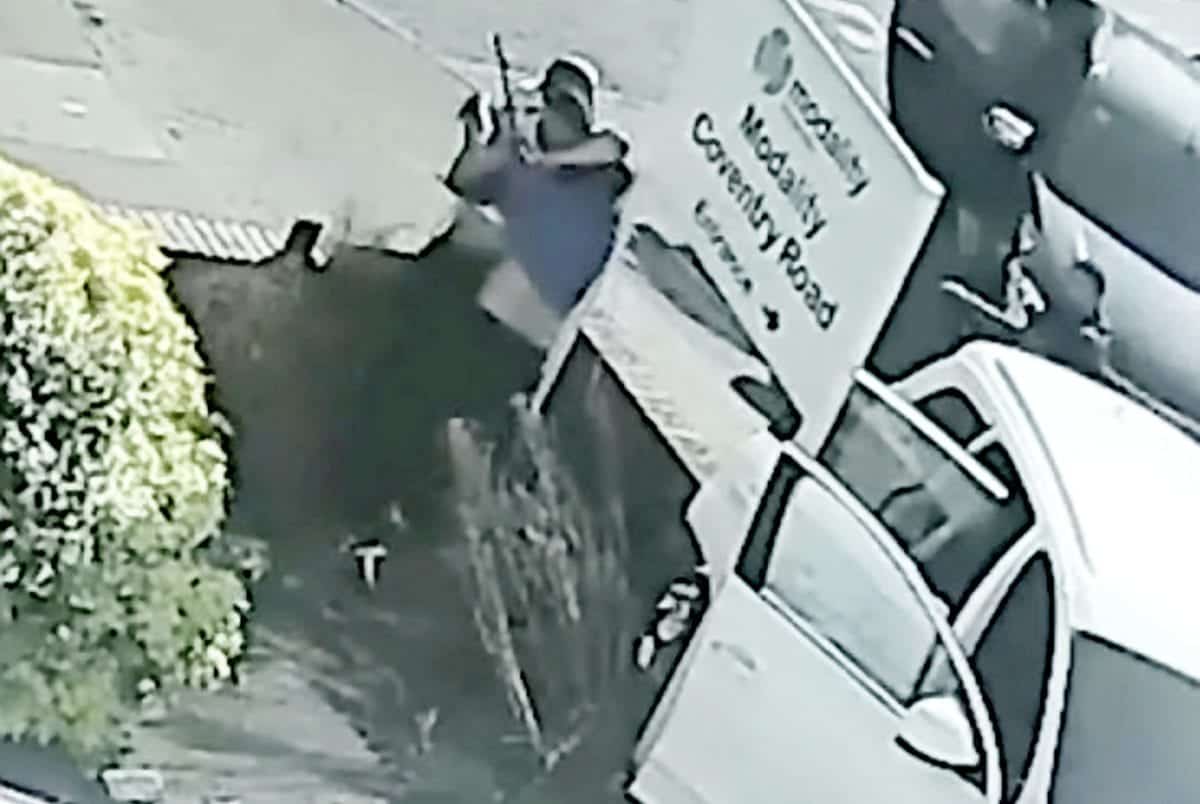 Three thugs have been jailed for 43 years after being caught on CCTV launching a savage broad daylight machete attack which left a man with life-threatening injuries.

Dramatic footage captured Amir Hussain, 23, hacking at the terrified victim with a huge blade as brothers Zain Islam, 23, and Hussan Yousaf, 21, joined in the brutal assault.

The trio had chased the victim, who was driving his mum to a doctor’s appointment, in a stolen pick-up truck before he ploughed into bollards and knocked down a wall.

The 23-year-old man jumped from the crashed vehicle and pleaded for his mother to be spared before Hussain charged at him wielding the 12-inch blade.

Harrowing CCTV shows the victim staggering around while clutching his torso following the vicious attack in Small Heath, Birmingham, on May 22.

He was left with his stomach sliced open and a deep cut to his arm while the offenders sped off from the scene in a Fiat Fullback being driven by Islam.

Witnesses provided police with the 4×4’s registration plate and in the early hours of the following morning it was intercepted at Warwick services on the M40.

Two teenagers were detained from the car – stolen during a burglary in Swadlincote, Derbyshire, in March – and forensic examinations revealed traces of the victim’s blood and Yousaf’s fingerprints on the bodywork.

Two weeks later police received a tip-off the trio were lying low in a hotel in Attercliffe, near Sheffield, where they were found hiding on June 6.

Drugs were also recovered from the room plus almost £6,500 in cash and all three refused to answer any questions during police interview after being arrested.

On Monday, Hussain, of Bordesley Green, Birmingham, was jailed for 17 years while Islam and Yousaf, both from Small Heath, were handed 13 year jail sentences.

Detective Constable Darren English, of West Midlands Police, said afterwards: “This was a savage attack that left the victim with life threatening injuries – in fact, had it not been for the swift actions of a nurse who ran to his aid he may well have died.

“The Fiat 4×4 passed the victim’s Audi Q7 moments after he set off to take his mum to the doctor. It reversed at speed for about 200 metres before swinging into a driveway and giving chase.

“The victim – who has not been able to provide a motive for attack – was understandably panicked and in his bid to get away collided with bollards and a wall.

“He pleaded with the men – who he knew from the local area – for calm and urged them not to hurt his mother. But Hussain immediately began hitting out with the machete.

“The victim was placed in an induced coma and thankfully pulled through following surgery – but he has been left with scarring and the psychological impact of such a traumatic event.

“I’m pleased the courts have taken these three dangerous men out of society for a significant period of time.”