An American TV host who posed with dead goats, stags and sheep after hunting with guns on a remote Scottish island has been slated by animal lovers. So-called ‘world-renowned hunter’ Larysa Switlyk drew criticism from politicians and celebrities after posting the snaps on Instagram. The blonde television presenter, dressed in camouflage gear, knelt beside the […] 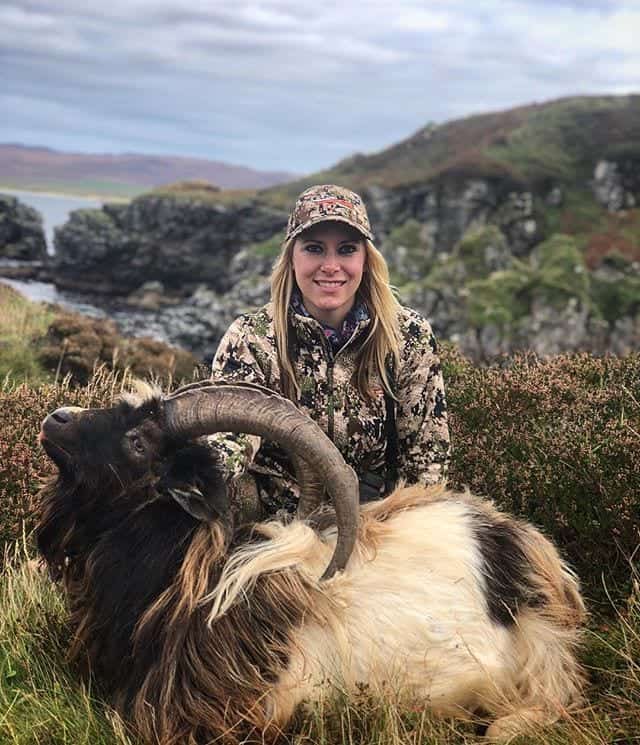 An American TV host who posed with dead goats, stags and sheep after hunting with guns on a remote Scottish island has been slated by animal lovers.

The blonde television presenter, dressed in camouflage gear, knelt beside the corpse of a goat on the Isle of Islay, in one picture posted on social media.

In others, she posed “in sniper mode” lying in the long grass and pointing a gun into the distance.

One of the snaps showed her holding up the head of a dead sheep beside a rock smeared with blood.

Beautiful wild goat here on the Island of Islay in Scotland. Such a fun hunt!! They live on the edge of the cliffs of the island and know how to hide well. We hunted hard for a big one for 2 days and finally got on this group. Made a perfect 200 yard shot and dropped him with the @gunwerks and @nightforce_optics ! ( Good thing too because he could have ran off the cliff into the water). Ever interested in hunting Scotland and doing some whisky tours, email larysa@detailcompany.com !

Other animals she hunted included stags, and in one caption she wrote: “In awe of my Scottish Stag ~ can’t wait to bring it back to the castle for the chefs to cook it up!”.

The photos sparked outrage in Scotland, with one MSP warning he would be looking into whether the hunts were organised by an official group.

Larysa posted pictures of a man named Jason, also posing with animal carcasses, and wrote: “Congrats on Jason on his gold medal ? goat here in Scotland on Islay. A unique hunt”.

In another, she said: “Proud of Jason and his second monstrous Red Stag here in Scotland…talk about gold medal status. Was fun to be behind the camera and capturing it all on film.

“Amazing hunting here in the Highlands.”

MSP Michael Russell said: “If this is actually happening on Islay and laid on by some sort of tour company I would want to see it stopped immediately.”

“Disgraceful. It’s a goat. And it’s in Scotland, on a beautiful island. Stop this please @scotgov.”

Congrats on Jason on his gold medal ? goat here in Scotland on Islay. A unique hunt, email larysa@detailcompany.com for more information !

And Nicky Campbell wrote on Twitter: “Please don’t take this the wrong way but you are a twisted sicko”.

On her website, Ms Switlyk described herself as “a mixture of a tomboy and model,” and “competitive, engaging and adventurous.”

Her television show, Larysa Unleashed, aims to “enlighten and educate the general population about why people hunt and fish, the importance of conservation, cultural experiences, and the rules and regulations behind it”.

And she is described as having “found true love and zeal for hunting”.

Dream stag right there Jason got with a narly drop time off his right side that looks like a baseball bat !! I shot it with a camera so it kind of counts ?? Hunting Scotland is unreal !!! @gunwerks @nightforce_optics @larysaunleashed