Viva! Campaigns’ investigations have shone the spotlight on countless farms, however this is their biggest dairy exposé to date. The month long investigation casts a large shadow over the dairy industry and demonstrates that behind every glass of milk and slice of cheese lies a hidden story of pain and suffering. Viva!’s exposé highlights the shocking reality of the industry and asks why its appalling treatment of animals continues to go unnoticed. 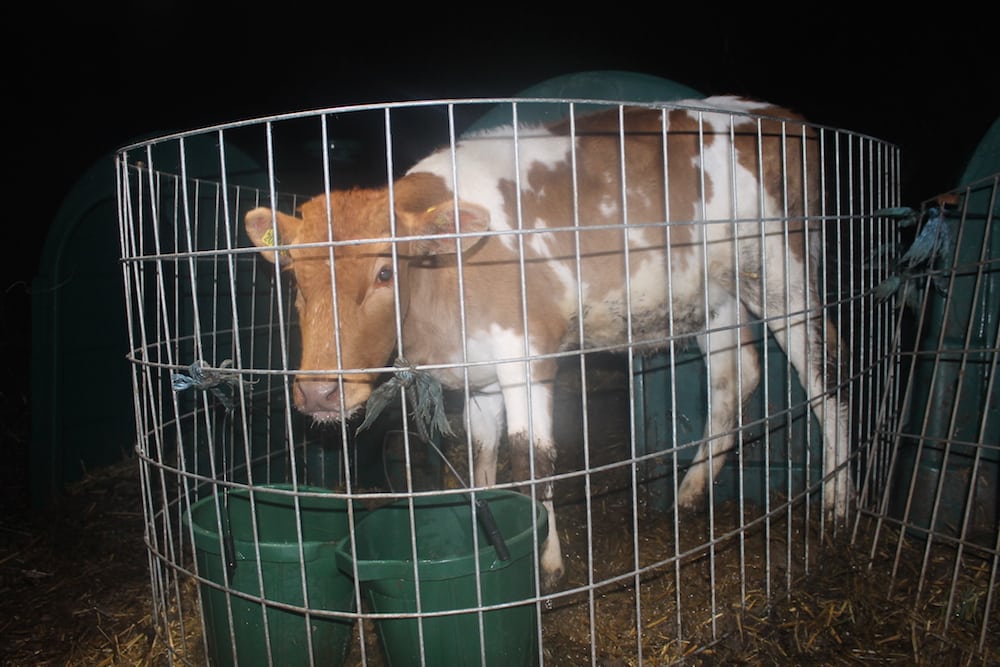 Viva! Campaigns investigation footage documents a depressing example of how exhausted and overworked cows are. Whilst at Fairfield Farm investigators discovered what the industry calls a ‘downer’ cow – a cow may ‘go down’ because of temporary nerve paralysis caused by calving difficulties or simply fatigue from her gruelling workload. The team came across a ‘downer’ cow that had been left to die on a cold concrete floor, her condition was so severe that a local vet, Howard Liebermann, was called immediately to the scene to perform emergency euthanasia, he explains his findings:

“You can see there’s been some abrasions from trying to get up, I would suggest she’s been recombinant for a period of time. She was really dull and unable to rise and certainly she’s not on great bedding. There was quite a lot of bruising around and suffering.”

And after he had euthanised the animal: “My job is to alleviate suffering, regardless of who owns the animal. I think she’s out of suffering now.”

Juliet Gellatley talks about her experience at the scene of this disturbing event: “On a wet, filthy concrete floor we came across a cow who was so ill she couldn’t move, not even lift her head. Her body was wasting away and revealed large sores, both old and new. The pain and suffering was heartbreaking. We called the RSPCA and a local vet who, to his credit, turned out even though it was about 3am. He agreed with us that this poor creature was suffering and used his authority to put her out of her misery. It was deeply distressing for all of us.”

Despite the UK’s decrease in dairy consumption, a large majority of consumers are still unaware of how and why cows produce milk. Like humans, cows have to give birth to produce milk. Most dairy heifers are impregnated for the first time when they are between 15 and 18 months old, giving birth to their first calf nine months later. The vast majority of dairy cows in the UK are now artificially inseminated (AI) as this is much cheaper than keeping a bull and allows farmers to select the sire from a variety of breeds.

Dairy cows are kept in a continuous cycle of pregnancy and birth so they will continue to lactate – this is the basis of the dairy industry.

Milk production would naturally decrease and stop after about a year, therefore to keep the dairy cows lactating, they are inseminated about two to three months after giving birth. This ensures the maximum profitability from the cow. However, as the cow’s body is producing abnormally large quantities of milk, usually 25 to 28 litres per day, and milked for seven months of her nine month pregnancy, as well as growing a calf for most of the year, they are exhausted by the age of five years as their bodies simply cannot keep up with these extreme demands on the metabolism.

When she stops producing enough milk to be profitable, or cannot get pregnant or suffers from one of the common illnesses caused by intensive dairy farming and it becomes too expensive to treat, she’s slaughtered for cheap beef.

At least half of the farms visited by Viva! Campaigns used hobbles (shackles), which are attached to the hind legs of cows to stop them doing the splits – often after they have suffered muscle or nerve damage during calving. This investigation reveals several examples of this common practice, particularly mega-dairy Higher Alminstone Farm which supplies their own brand cheddar to supermarket giant Tesco, as well as Cadbury supplier Mile Elm Farm and ice-cream producer Fairfield Farm.

Almost constant pregnancy and lactation, unnatural housing and unnatural feed takes its toll on the over-worked cow. Mastitis (a painful infection of the udder) is often transmitted by contact of the teats with the milking machine and through contaminated hands or materials. It can be treated with antibiotics but milk from those cows is not usable so cows with mastitis that hasn’t become life-threatening are often milked anyway as the allowance for somatic cells (pus) in milk is quite high – up to 400 million somatic cells per litre (EU regulation). 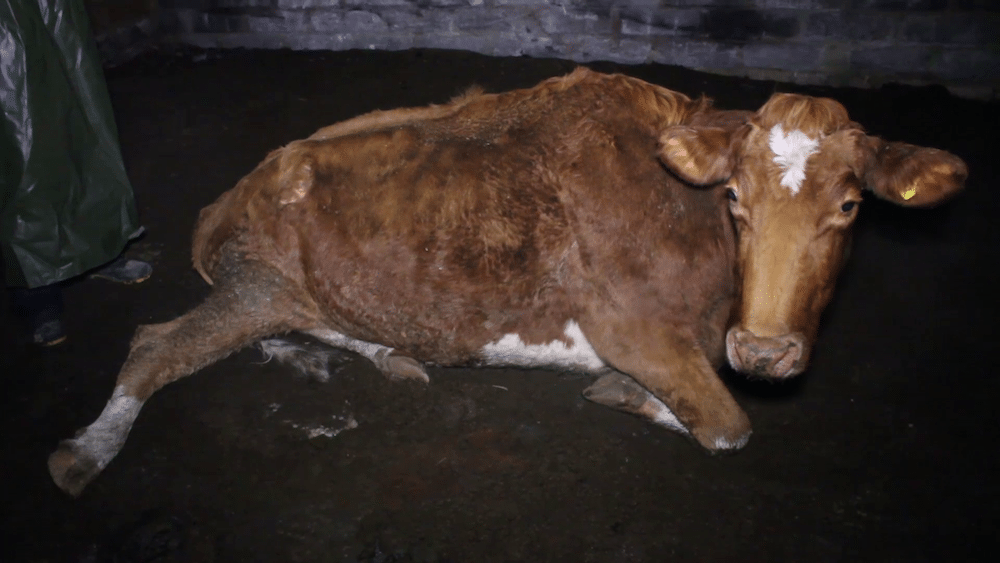 This brutal existence can often causes laminitis (an excruciating foot infection), half of the cows in Britain go lame each year and 20 per cent are lame at any one time. Many lame cows continue to be milked regardless of their severe pain. Yet lameness is still the major reason for the culling of dairy cows, accounting for about 10 per cent of culls.

Viva! Campaigns’ investigators documented examples of allegedly illegal hutch use at Fairfield Farm, South Devon which makes Aunty Moos ice cream. Calves can be kept in cruel solitary hutches for the first eight weeks of their lives, but registered ear tags proved the calves were four months old [10]. The Welfare of Farmed Animals (England) Regulations states that ‘no calf shall be confined in an individual stall or pen after the age of eight weeks’ unless they have permission from a vet. Viva! Campaigns witnessed large calves desperately trying to reach each other through the wire, hungry for contact and affection. These babies were left alone in these desolate hutches with barely any room to even turn around.

Juliet Gellatley describes her first-hand experience viewing such hutches: “Fairfield farm in South Devon, which makes Aunty Moos ice cream, had calves isolated in hutches. That is not unusual but at four months old, these little girls had been there twice as long as the law recommends. They should have been group housed with other calves at two months old unless a vet had endorsed this protracted solitary confinement.

Four calves stood in their tiny, fenced-off area outside their hutches, thick with mud and excreta. None had water and they could only just turn around so small was the space. I knelt by one and she desperately sucked my fingers. Mile Elm Farm, Wiltshire, supplies the world’s second biggest confectionery brand – Cadbury. Again we saw rows of hutches, each with a tiny fenced area and each containing a very young black and white calf. One, just days old, was completely alone – a teetering little thing so vulnerable and so beautiful. She latched on to me for comfort, trying to suckle from my fingers. Her mum was just metres away but this baby would never be allowed to suckle from her, never see her again. Is a chocolate bar worth this suffering?

At Arla farm in Taunton, Somerset, the calves were again isolated in hutches. Arla is the fourth-largest dairy company in the world whose brands include Anchor butter and Cravendale.”

Isolating calves in tiny hutches almost immediately after birth is now common practice and Viva! Campaigns filmed them in use at farms supplying Arla (Cravendale and Anchor brands), M&S and Cadbury. These glorified cages are used to house young calves shortly after they have been torn from their mothers so that the maximum amount of milk can be collected for human consumption. Separation of mother and calf is highly stressful for both – the calf needs to suckle, protection and physical contact and the cow’s strong maternal behaviour is denied. 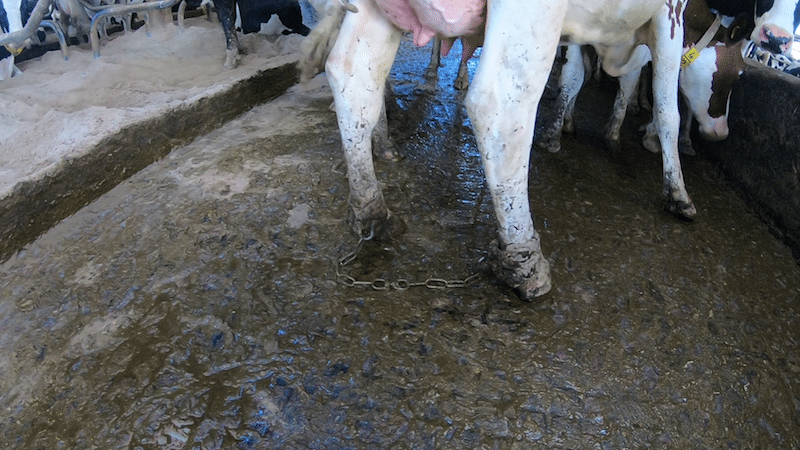 Subsequently, female calves become part of the milking herd while male calves are useless for dairy so will become veal, low quality meat or ‘disposed of’ (shot). Viva! Campaigns’ 2011 investigation into 15 dairy farms that supply Cadbury, contains shocking footage of a baby male calf being callously shot in the head. His body went to the local hunt for hound food.

One cow was lying in the straw and I could barely believe it – she was giving birth. Bitter-sweet feelings flooded my heart. Like us, this mother had gone through a long, nine-month pregnancy and here was its culmination – her baby. I felt a wonderful warmth as I was privileged to witness this miracle as the little calf, perfect and beautiful, appeared from her into the world. And then came the nausea – I knew that within a couple of days, her baby would be stolen from her.

The awful reality really hit home – the dairy industry is predicated on stealing babies from their mothers. We have no right to do this; it is abhorrent, shameful, disgusting and I will do all I can to expose it. All farms do it – extensive ‘free range’, zero grazing or organic – it is their modus operandi.”