Whether you’ve got more junk on the trunk or a little bit of jiggle round the middle, where you store fat is determined by your genes 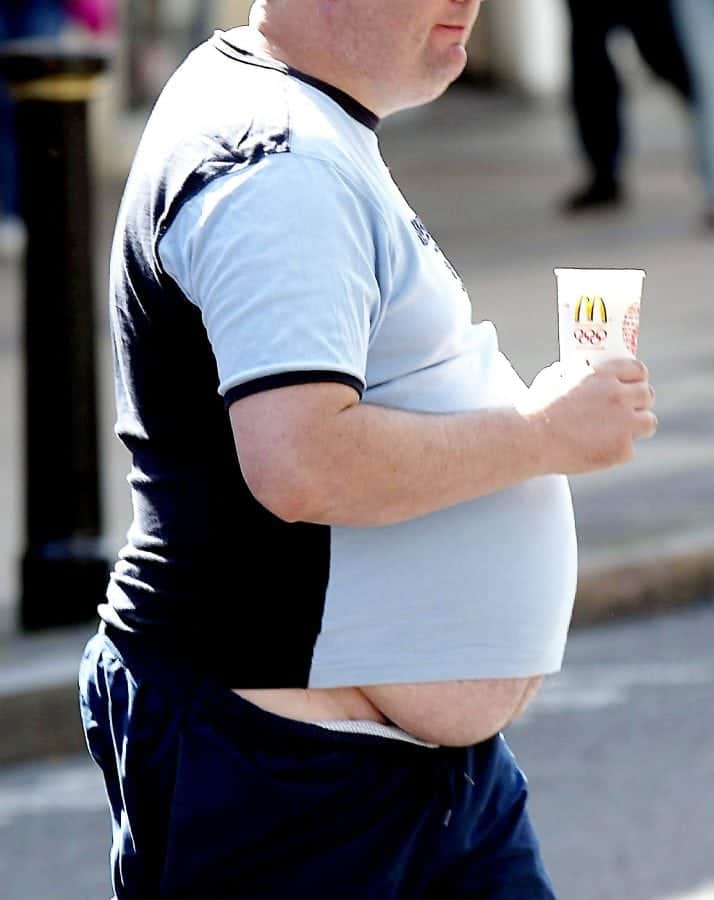 Having a beer belly or muffin top could be down to your genes, a new study finds.

Whether you’ve got more junk on the trunk or a little bit of jiggle round the middle, where you store fat is determined by your genes.

And genetics have a greater influence in shaping women than men, with women storing fat in a variation of places including their arms, legs and abdomen too.

The findings could lead to new treatments in the fight against the flab where in four UK adults are obese.

Postdoctoral researcher Dr Mathias Rask-Andersen at Uppsala University in Sweden explained: “We know that women and men tend to store fat differently – women have the ability to more easily store fat on the hips and legs, while men tend to accumulate fat around the abdomen to a higher extent.

“This has been attributed to the effects of sex hormones such as oestrogen.

“But the molecular mechanisms that control this phenomenon are fairly unknown.”

He added: “Obesity is set to become the world’s leading preventable risk factor for disease and early death due to the increased risks of developing type 2 diabetes, cardiovascular disease, and cancer.

“The distribution of adipose tissue to discrete compartments within the human body is associated with differential risk for development of cardiovascular and metabolic disease.

“Accumulation of adipose tissue around the viscera, the internal organs of the body, is associated with increased risk of disease in both men and women.

“In contrast, the preferential accumulation of adipose tissue in the lower extremities, i.e., the hips and legs, has been suggested as a factor contributing to the lower incidence of myocardial infarction and coronary death observed in women during middle age.”

In the study researchers measured how fat was distributed in 362,499 volunteers taking part in the UK Biobank, a cohort study of half a million participants in the UK.

Participants gave blood samples for genotyping and an electric current was fed through their body in order to detect the distribution of fat tissue resisting the current.

Millions of genetic variants across the genome were tested in the study for association with distribution of fat to the arms, legs or trunk.

It identified 98 genes that affect distribution of adipose tissue to the different compartments of the human body – 29 that have not previously been associated with anthropometric traits.

The researchers also saw a high degree of heterogeneity (difference) between the sexes genes and the effects of 37 associated variants are stronger in females compared to males.

The findings suggested genetic factors are more important in the distribution of women’s fat than previously thought.

Genes determining fat depositing around the body were found at a much lower extent in men who are disposed to store more fat in their abdomen, often leading to a ‘beer belly’.

Associate senior lecturer Dr Åsa Johansson, also from Uppsala’s Department of Immunology, Genetics and Pathology said: “We were struck by the large number of genetic effects that were stronger, or only present, in females.

“Upon closer examination, several of the associated genes were found to encode proteins that actively shape the extracellular matrix, which makes up the supporting structure around cells.”

The findings suggest the genes responsible for remodelling of the structures such as proteins outside of the cell, are one of the mechanisms controlling body fat distribution.

Fat stored in the trunk has previously been associated with increased disease risk.

Men have a greater amount of abdominal fat than women which may explain the increased prevalence of cardiovascular disease observed in males.

Studies have even shown that women’s ability to store fat around their hips and legs could be protecting them from cardiovascular disease.

The result of the current study may therefore lead to the development of new interventions to redistribute body fat and reduce the risk of cardiovascular disease.

Dr Rask-Andersen concluded: “The biological systems we highlight in our study have the potential to be used as points-of-intervention for new drugs that are aimed at improving the distribution of body fat and thereby reducing the risk of disease.”

The study was published in Nature Communications.