“We immediately realised the post would grow too big and that we didn’t have the resources to plant that many trees," Plant A Tree Co said in statement. 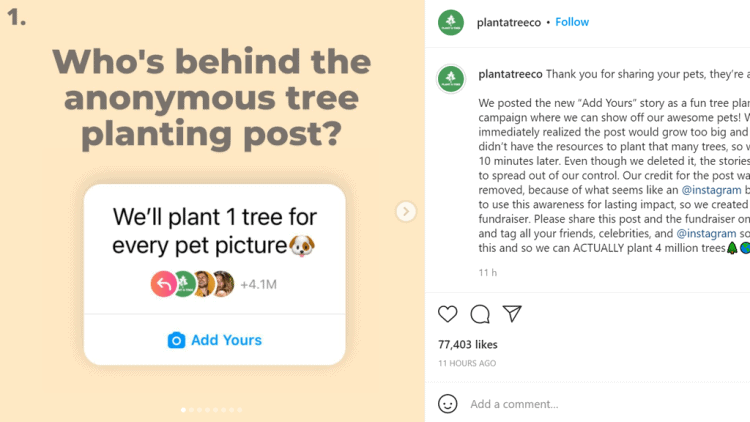 Instagram is working to make one of its features clearer after millions of people appeared to be misled by a viral trend claiming a tree would be planted for every pet photo they shared on the platform.

After some confusion as to its original source, the account, Plant A Tree Co, has claimed responsibility for the trend, which saw users posting pictures of their animals accompanied by a sticker with the caption: “We’ll plant one tree for every pet picture.”

Stickers add a small image or line of text to a post, and on November 1 Instagram rolled out the “Add Yours” feature – which allows users to reshare and create their own post with a sticker as part of a public thread.

Plant A Tree Co claimed it made its sticker as “a fun tree-planting campaign where we can show off our awesome pets”, but more than four million users have since used it and the page said it quickly realised it “does not have the resources” to fulfil the promise.

“We immediately realised the post would grow too big and that we didn’t have the resources to plant that many trees, so we deleted it 10 minutes later,” said Plant A Tree Co in a statement on the platform.

The page said it is now hosting a fundraiser for Trees For The Future, a charity aiming to tackle hunger, “so we can ACTUALLY plant 4 million trees” – and has raised more than £2,800 so far.

Trees For The Future told PA that it is “not affiliated” with Plant A Tree Co.

“When the fundraiser came to our attention, we immediately reached out to the group asking them to clarify the nature of the fundraiser and we reported the post to Instagram,” Trees For The Future added.

Plant A Tree Co has previously used Instagram campaigns to raise money, once pledging that reposting its content on a personal story would generate 0.01 US dollars for a charity.

A since-deleted May 2019 post, found on archiving website archive.org, shows the page then encouraged followers to “repost on your story to plant 100 trees”.

A spokesman for Meta, Instagram’s parent company which recently rebranded from Facebook, said: “The ‘We’ll plant one tree for every pet picture’ trend shows the power of the Instagram community to raise awareness on important topics.

The “Add Yours” stickers are supposed to show their original author when clicked on, except in some cases, such as when the creator deletes their original post, or if their account is private – but the PA news agency understands Meta is working to make these cases clearer.

PA has contacted Plant A Tree Co for comment.