Rumour had it that the bridge was bought in the mistaken belief that it was Tower Bridge, something that has been vehemently denied by both Robert McCulloch and Ivan Luckin, who arranged the bridge's sale. 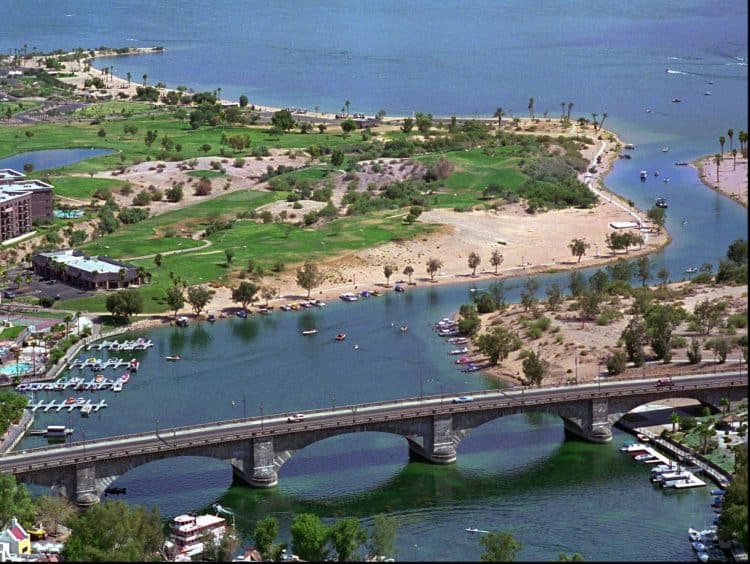 A city in the US which became the new home to London Bridge is marking a milestone for the structure.

Lake Havasu City is playing up its roots with a month of celebratory events marking the 50th anniversary of the dedication of the bridge after it was rebuilt piece-by-piece in the Arizona resort town along the Colorado River.

The city’s founder, Robert McCulloch, bought the stone bridge in 1968 for approximately two million US dollars and had it transported by ship and truck from London in pieces across the Atlantic Ocean and via the Panama Canal and Los Angeles.

That process and reconstruction took three years, leading to the October 1971 dedication.

The city of London had decided to replace the bridge because it was sinking and unfit to withstand increased vehicle traffic.

In Lake Havasu City, which has population of about 57,000, the bridge spanning a channel between the shoreline and an island in the river has become a major tourist attraction.

“New York has its Empire State Building, St Louis its Gateway Arch, and LA its Hollywood sign. There’s only one London Bridge in the world outside of England, and we’ve got it here thanks to the foresight of our founding fathers some 50 years ago,” said Terence Concannon, president and CEO of Go Lake Havasu, the city’s convention and visitors bureau.

Following a ribbon-cutting ceremony on Friday, the 50th anniversary celebratory events will continue with a candlelit feast and ball.

The idea for the feast came from the dedication of the bridge in 1971, which also featured a large tent decorated for a formal dedication dinner, said Melanie Preston of a Lake Havasu City non-profit group that organises the London Bridge Renaissance Faire annually.

The dedication dinner 50 years ago was itself inspired by the bridge’s original dedication in 1831 in the city that gave the bridge its name.

“It’s going to be banquet-style with rows of tables, candles, flowers, banners, and all of that,” Ms Preston said.

Lake Havasu Museum of History director Hannah Rangel said the feast will be an interactive experience for the guests and will include modelling of some of the costumes that made their debut in the original costume contests in the 1970s, and have since been donated to the museum’s collection.

“Some of the dresses that they made in the previous costume contests are just gorgeous,” Ms Rangel said.

“So we will talk about those and give some history. We are putting a large emphasis to make sure that the history is correctly represented for the city.”