The English Defence League founder failed to attend a hearing in March over an unpaid legal bill after he lost a libel case. 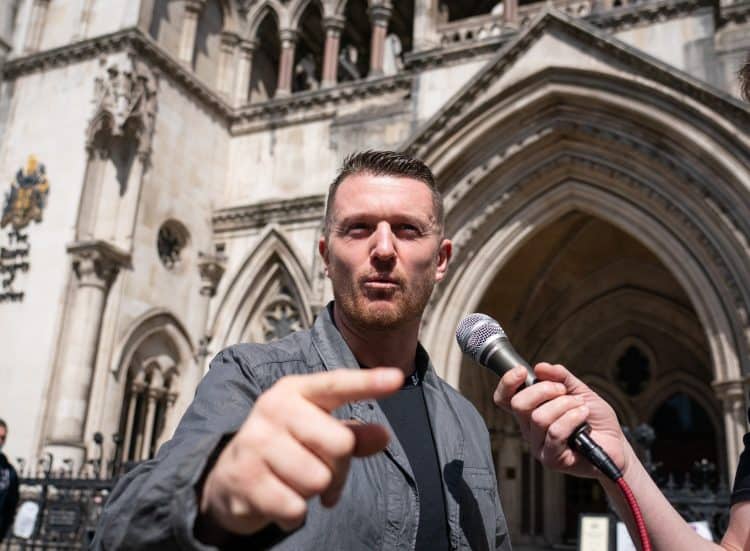 Tommy Robinson did not go to court to be questioned about his finances because of mental health issues caused by being harassed, the High Court has been told.

Robinson, whose real name is Stephen Yaxley-Lennon, had been expected at a hearing in March over an unpaid legal bill after he lost a libel case brought against him by a Syrian teenager last year.

Jamal Hijazi successfully sued Robinson after the then-schoolboy was assaulted at Almondbury Community School in Huddersfield, West Yorkshire, in October 2018.

After the incident went viral, Robinson made false claims about Mr Hijazi attacking girls in his school, leading to the libel case.

Following a pre-trial hearing in November 2020, Robinson was ordered to pay more than £43,000 in legal costs.

Earlier this year, Mr Hijazi’s lawyers successfully applied for an order requiring Robinson to return to court to answer questions about his finances on March 22, but the 39-year-old failed to attend.

The case was referred to a High Court judge who ordered the English Defence League founder to go to court on Friday for a preliminary hearing about whether he had committed a contempt of court.

As he entered the Royal Courts of Justice in London on Friday morning, Robinson described the hearing as “boring crap”.

He said: “My instructions are he has been suffering and was at the relevant time suffering from a number of mental health issues that he says are attributable to harassment by a number of individuals.

“He is, for better or worse, somewhat of a notorious figure.”

The barrister later said: “Mr Yaxley-Lennon says, to put it bluntly, that he simply was not in a fit state of mind to attend court due to the culmination of the mental health issues and the harassment he has faced.”

Mr Justice Nicklin said Robinson would need to attend a full hearing in August to decide whether he had committed a contempt of court, where he could provide evidence about his medical issues.

Ordering Robinson to return, the judge said: “Were he to fail to attend again, that would be an aggravating feature if the court ultimately found he did not have a lawful excuse for failing to attend on 22 March.”

Robinson will also have to go back to the Royal Courts of Justice on June 9 for the original questioning over his finances.

Nick Lowles, chief executive of Hope not Hate, said, “For those of us who have been working for justice for the teenage victim of Robinson’s vile vitriol, Jamal Hijazi, Tommy Robinson’s attendance in court today is a step in the right direction. Jamal and his family deserve justice.

“We believe that Tommy Robinson is hiding at least £3 million in assets, and have collected enough evidence to prove it.

“We look forward to seeing this case progress further, and will continue to work tirelessly to try and make sure that Jamal and his family see Robinson pay up.”

Related: Backlash for Johnson as Tories pay the price for partygate at the polls