Nailed IT! Attention, the modern man is painting his nails

Long gone are the times a painted nail was just for women… this is an age of embracing it regardless of your sex. 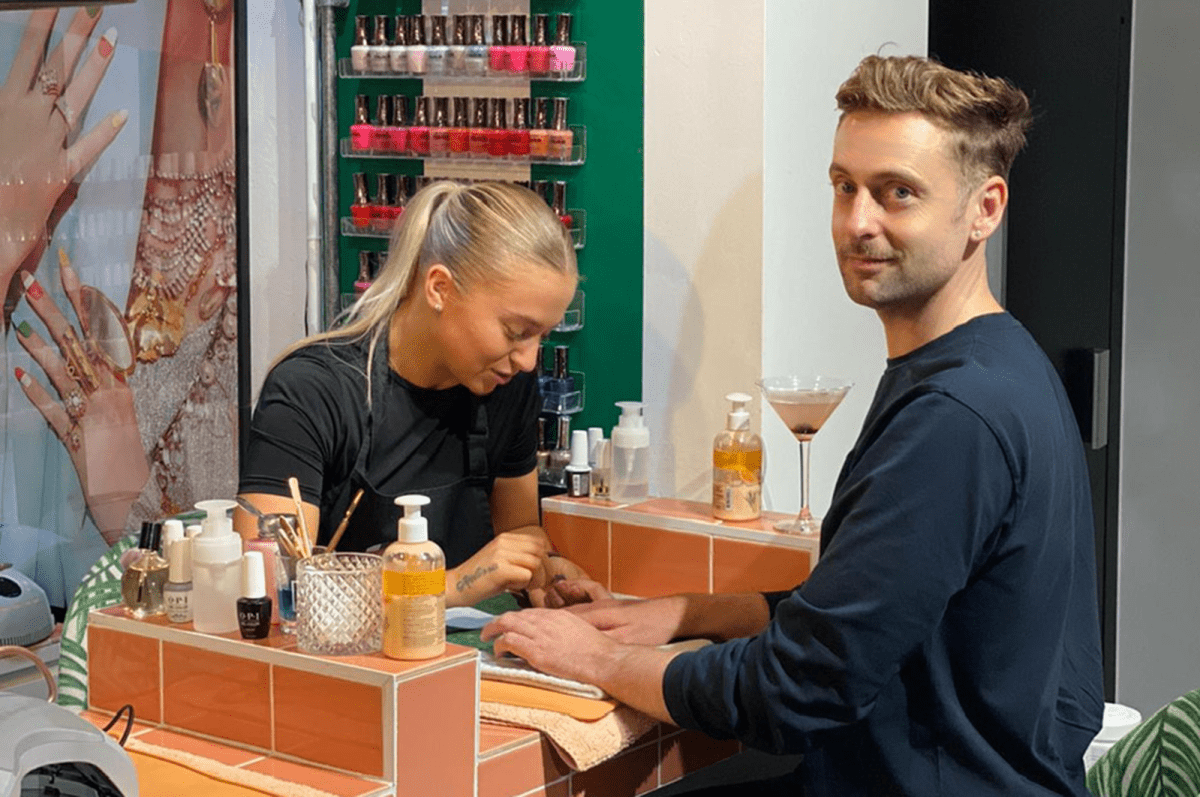 Glossy, shiny, matt finish, longline, trimmed edges… no, I’m not talking about the latest piece of car-porn, I’m talking about nails. And we are just as interested as the girls!

However, the trend that is slowly becoming popular and more widely accepted for the male and others, didn’t just happen, in fact it’s actually been around for years. Thousands of years. A paper from the University of Rochester Medical Center, found that men had been colouring their nails since around3500 B.C.

Yes, you are behind the trend, please catch up!

So, as more and more people embrace the painted nail, I wanted to finally pull back my sleeves and see how I felt adding a bit more colour into my life.

Claw, look at that paint job!

Metrosexual has been a word flung around more times than we’ve had Prime Ministers, which in 2022 is an achievement. But how do we really feel (heterosexual or LGBTQ+ or otherwise) about painting our nails and becoming comfortable in the process?

The Beauty Club London has had male customers for manicures, paint work and nail art, since opening their doors over two years ago. However, in the past year they’ve seen a dramatic rise in men wanting to put their nails back in the limelight.

As a gay man, you’d think that I was a lot more comfortable sitting in the chair and offering over my hands to senior nail technician, Jordan. But you would be wrong. Instead, I worried that painting a nail wouldn’t be liberating or fun at all. My fear was that it would receive shaming and be attention grabbing for the wrong reasons. Yes, I’m a worrier.

So, I sat down in a very comfy chair, next to a lady who was dripping in diamonds and smiled awkwardly. I sipped a lychee martini and soaked my hands in hot water as Jordan went to work. Here we go!

Surprisingly (I’m ashamed to say), Jordan told me that she’d already had four male customers that day! All wanting manicures and one for a painted nail… To my amazement, the painted nail (orange, great colour choice) went to a heterosexual man. I started to relax.

Jordan continued to tell me that more men were embracing it, opting for healthy nails from manicures to buffering, shortening them and then glossing. It wasn’t just about a look, but something that is actually caring for our nail-health too.

After she’d tamed my own claws, it was down to colour choice.

I immediately shouted. Spurting the word out like I was some masculine cave man there against my will. I wasn’t. I was loving it.

As she reached for the colour (shade), I realised this knee jerk reaction was part of the problem and quickly suggested a green instead – yes, I’m aware it’s still dark, give me a break.

This really was a work of art in the making. Jordan carefully painted each trimmed and polished nail, telling me that she’d trained and worked in the industry for years. She informed me that she’d seen all types of nail (gross) and said mine were “nice.” I’m sure she has to say that to all customers, but I took it, they are nice.

After one hour, two lychee martinis, gentle bedside manner and reassuring confidence (thanks The Beauty Club London and Jordan), I was done. Painted. Ready to put my nails to the forefront.

Vowing to keep them for at least a whole weekend, I went out into the world feeling a little different than when I walked in.

At first, on public transport, I concealed them from other people’s gazing eyes. The worrier was there, only now with green nails. But then, I saw a man cuddling a girl, wearing red polish, and later three guys all sporting colourful nails.

I released my tension.

Yes, London, I still got some second looks. I went on a date and as complementary as he was, I’m not sure he loved the paint work. I went to drinks and dancing the next night, with a rave reaction and began to feel more confident. From grabbing coffee, to a park run, finally, I embraced (loved) the nail and in turn, felt actually more comfortable in myself.

We should be doing this

This ‘trend’ of pampering ourselves, or opting for a colour, is really about adding to our own identity. Playing with what we like and flirting with our appearance. And that’s ok. Men, Drag Artists, women, other people, are all experimenting and trying out new things. Rightly so.

I was a fool to assume or worry or feel anything less than fantastic in having this done.

It’s healthy to have manicures and look after our nails/toenails. We should be doing this. And it’s also great if you want to paint them too. Liberating, who knew!

As the weekend came to an end, I looked down at my nails, still perfectly intact and unchipped (how I don’t know) and smiled. This was an instant boost. An endorphin inducing moment where I cared less and less about what people thought and more about being happy.

Because, at the end of the day, who cares what others think? Who cares if you have red, blue, purple, black or any other colour on your fingertips? Who cares if you are straight, gay, or otherwise? History is already telling us we are behind! Isn’t it time we caught up?

So, The Beauty Club London, I’ll be back. I’ll have a manicure and maybe even some paint work occasionally. I can see why this has become a growing trend, thousands of years in the making, and I can also see why we were taking our time to embrace it.

We are a nation that is quick to judge, but slowly coming up to speed, thankfully.

And there’s really ‘nail’ time like the present, try it for yourself.

Nails were done at Paints Nails London a concession in The Beauty Club. Dan Harding is the author of Gay Man Talking, out now.