Jonathan Reynolds' 9 year-old daughter set out a platform campaigning for medium size pockets in all women’s clothes and a pledge to send a woman to the moon. 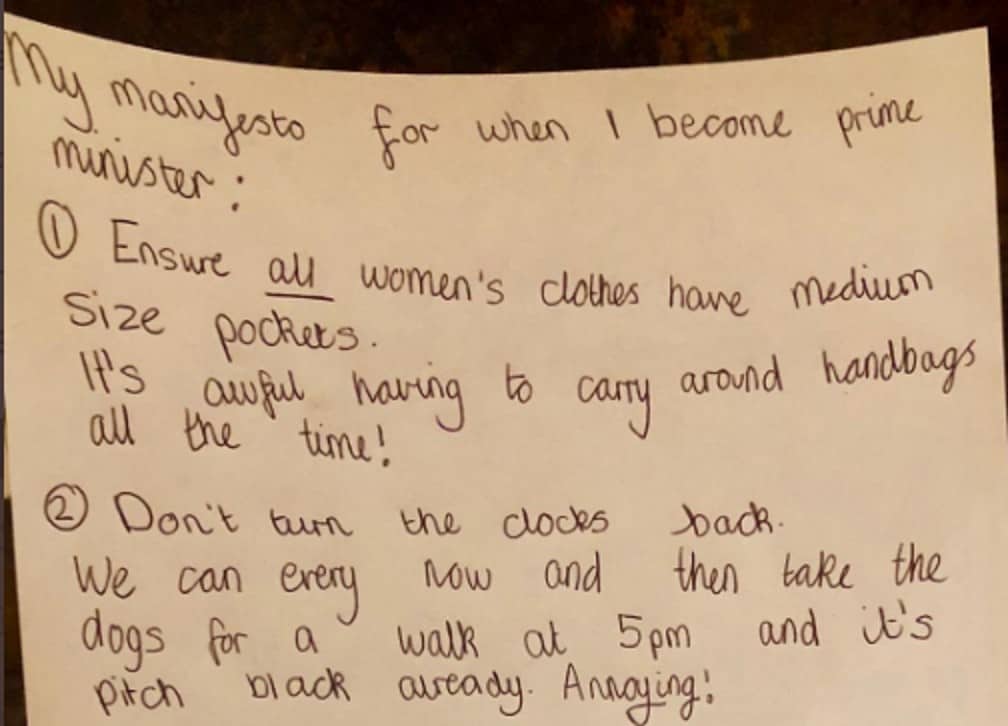 A Labour candidate’s daughter has gone viral thanks to a brilliant manifesto shared online.

Shadow Labour Co-Operative MP Jonathan Reynolds posted the five point document on his Twitter account this weekend, and has garnered a warm response since.

Entitled “My manifesto for when I become Prime Minister”, his 9 year-old daughter set out a platform campaigning for medium size pockets in all women’s clothes and a pledge to send a woman to the moon.

The manifesto also contains key points on not turning back the clocks so as to ensure it’s not dark by 5pm, giving more money to schools and stopping advertising in newspapers.

My daughter has written her manifesto. Some strong ideas here #ge2019 pic.twitter.com/A9fWi49KNT

Reynolds was involved in a war of words with chancellor Sajid Javid this week after the Conservative MP claimed a Jeremy Corbyn government would cost every taxpayer an extra £2,400 a year.

Mr Javid said: “Jeremy Corbyn is planning a reckless spending spree which we will all have to pay for. He will open up a huge black hole in the nation’s finances and hardworking people will be the ones that suffer.

“In order to pay for his policies, he will not only have to massively increase borrowing and debt, he will also need to hike up taxes by £2,400 per person – this is equivalent to an entire month’s pay for the average earner.”

But Shadow Treasury minister Jonathan Reynolds hit back: “This is more fake news from Conservative HQ after Sajid Javid had his plan to use the civil service for party political ends scuppered.

“Labour will set out our plans and our costings fully when we release our manifesto.

“The Conservatives should spend more time looking at their own policies as they failed to produce costings at the last election and, as Kwasi Kwarteng demonstrated, have no idea about the cost of their own policies.”