The comic sent a hilarious cease-and-desist letter to the MP, accusing him of adopting the “distinctive glasses” and “snootiness” of its character. 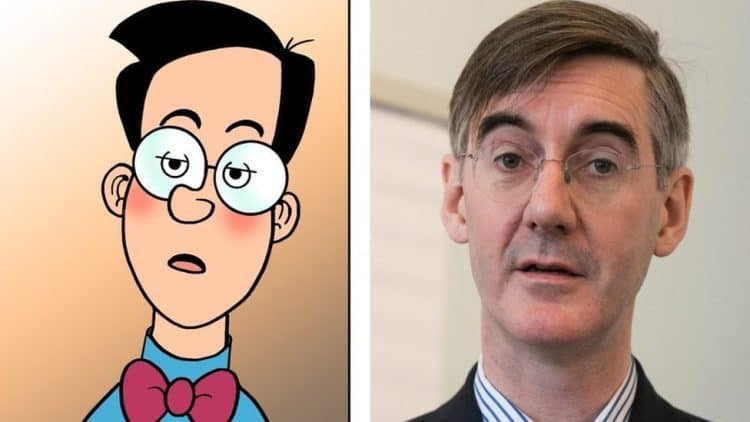 Jacob Rees-Mogg has been in the news again after the leader of the House of Commons became the first Cabinet minister to be dragged into an outside interests row.

The Tory MP for North Somerset may have breached parliamentary rules after not declaring £6 million in personal loans from his Cayman Islands-linked company, according to The Mail on Sunday.

Anna Mikhailova, the journalist who broke the story, said he argued the money was used “primarily” to buy and refurbish his London townhouse

It comes after Rees-Mogg led the government’s recent attempts to rip up the Commons’ standards rules to protect former Tory MP Owen Paterson from a lobbying row.

But back in 2018, the MP had an entirely different problem on his hands.

Comic book Beano penned a legal notice ordering him to “decist in your ongoing impersonation” of Dennis The Menace’s arch enemy Walter “The Softy” Brown.

The Beano’s letter accused the right-winger of infringing their copyright in impersonating their snooty prim character pampered by his wealthy parents.

Their cease and decist letter posted on Twitter accused the Conservative MP whose upper-class mannerisms and reactionary views have caused him to be dubbed the “Honourable Member for the 18th century,” of copying Walter The Softy.

Mike Stirling, Head of Beano Studios Scotland accused the MP for North East Somerset of copying the character’s attributes such as “hair parting and style”; “choice of spotty ties and vintage apparel”; “bullish behaviour with peers and stopping others from having fun”; “insistence to remind others of his father’s successful career”; and “snootiness.”

He added: “we would prefer the public gets its Walter fix in the pages of our comics and on beano.com, rather than played out on the political stage. In other words, bog off Rees-Mogg!”