TLE talks to the tattooed tailor out to shake things up in Mayfair. 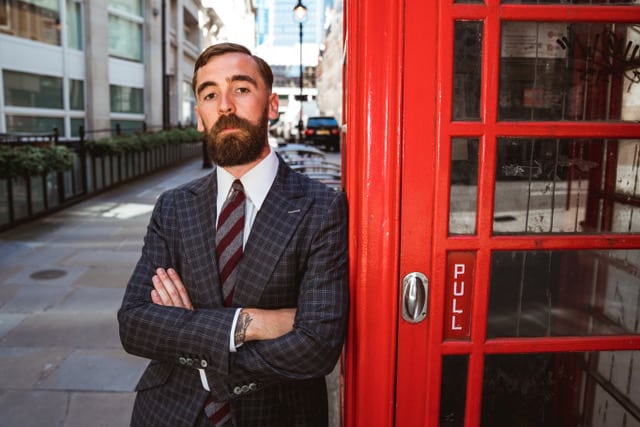 Adam James doesn’t look the same as other tailors, nor does he act the same. He is, in his words, an “anti-tailor” who is “stripping back the flannel around the industry”.

Located on the prestigious Savile Row he is out to disrupt the notion that the trademark home of British tailoring is the preserve of the elite. He doesn’t have a large store with his name across it or celebrity sponsorship. Instead, he is just “100 per cent real” to his client, and that, he believes, is what sets him apart.

At first glance, it isn’t the only thing that sets him apart. His well-groomed beard and tattooed arms appear more suited to the trendy bars of Shoreditch than the upmarket climbs of Mayfair. But “this is me”, he tells The London Economic. “It’s how I want to show up and it’s what I am comfortable as”.

Adam is frank and open with his opinion when it comes to the discussion of the tailoring industry, particularly how some competitors like to “hide behind outdated practices” – ones that are designed to “extract maximum value without delivering the best for the client.”

He has certainly earned the right to be so brash. After spending a decade in the London market building his profile he has seen first hand the results of what he calls a “diluted approach” which leads to many people getting “subtly ripped off”.

But the biggest problem is how intimidating Saville Row can be for many.

“This is not just me talking it up,” he says. “In the last three months I’ve won two customers from Saville Row where they felt they did not fit, despite having the money and need for a bespoke suit. Their comments were “I just didn’t feel I fitted in” and “It’s not for people like me. I’ve found that my clients are looking for the Savile Row quality but actually a better, more relevant experience and price, which is where I come into the mix.”

With the easing of Lockdown 3.0 work is starting to pick up again on the back of a tough year for the tailoring industry. Some 220,000 weddings were postponed during the pandemic and, as for office workers, there has been a cumulative saving of £140 billion among workers who are out to “reward themselves for getting through the challenging months.”

“Covid-19 has shown that customer experience and relationships are really important,” Adam says. “People have really missed that personal contact and a bespoke shopping service.”

As such, the future is looking bright for honest and relatable tailors who want to sell premium British tailoring in an accessible environment.

“I want men to dress well, with confidence and to feel confident,” Adam concludes. With a pent up desire to do just that after a year in joggers, he may be well placed for a hard-earned post-covid dividend.

Related: Brits reveal what they will miss most when morning routines return to normal