London is one of the most exciting cities in the world. There is so much going on for those in the know. All you need is a little information to help you find the exciting, wacky, and completely different things to do in London. If you’re not careful you can find yourself dining in soulless […] 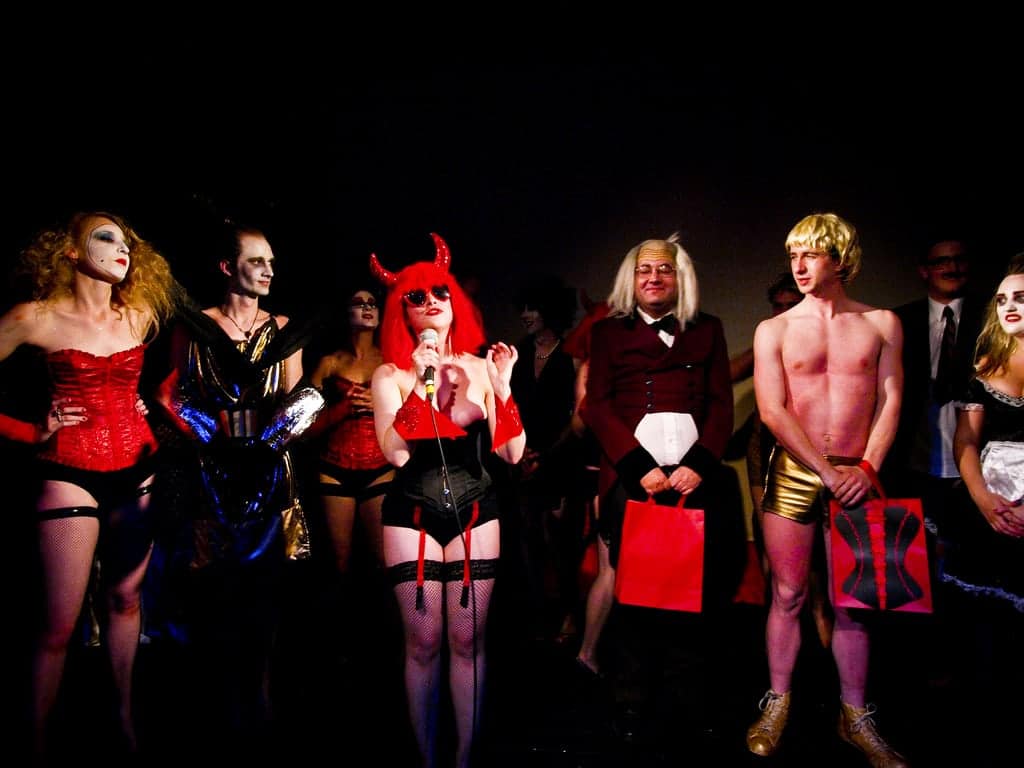 London is one of the most exciting cities in the world. There is so much going on for those in the know. All you need is a little information to help you find the exciting, wacky, and completely different things to do in London.

If you’re not careful you can find yourself dining in soulless chain restaurants, socialising in dull gastro pubs, or forcing the fun in a sweaty nightclub. Life, and London, has more to offer than that! Secret Cinema is a great event to attend as a date night or as a group. Prepare to be immersed! From grassroots film screenings in abandoned London buildings, to large-scale productions in some of the most spectacular spaces worldwide, they create 360-degree participatory Secret Worlds where the boundaries between performer and audience are blurred. The set and reality are constantly shifting.

You truly become part of the era, including your costume, the music and ultimately the film (which you won’t know what it is until you get there). This month Secret Cinema is screening the original Blade Runner movie. Expect to be dazzled. Descend into the past and meet a different kind of London.

Gone are the days when attending an event meant that you had to sit and watch. Nowadays you can be part of the action. Immerse yourself and experience the event first hand.

The Tick Tack Club is a perfect example of such a thrilling adventure. Inspired by the era of BBC’s Peaky Blinders, this is an immersive food and entertainment experience taking place in an “illicit” drinking and gambling den run by seedy gangsters, hidden under the train tracks.

Spread across two floors you can indulge into a luscious dinner, sip fabulous cocktails, gamble on horses, sing around the ol’ Joanna, or meet a gangster or two. The location remains a secret under strict instructions of the Peaky F***ing Blinders.

This is the perfect opportunity to dig out a flat cap, dress up, and embrace the roaring 20’s in true tassel style. This only comes around once a year but what a brilliant way to spend a day. It has to be seen to be fully appreciated.

Now included in the 25.00 admin fee is a 5 piece Santa costume but the race organisers do encourage you bring your own. They are always on the prowl for Elves, Reindeer, Snowmen, Christmas Bunnies, Presents… in fact anything with a Christmas theme! There will be prizes for the best costume on the day for adults, children and pets(!) so make sure you are creative and dress to impress.

On the route you will pass carol singers, reindeer-costumed Christmas folk, Santa’s grotto and all sorts of festive fancies as you run around a lovely park for charity, raising money with every step you take. This really is a great family day out and a brilliant way of justifying the mince pies. Swingers is based on a 1920’s golf-club set in the bucolic English countryside. Step into the secret world of their old-school clubhouse, rolling greens, lush foliage and unparalleled hospitality.

The venue is just a stone’s throw from the Gherkin in the heart of London and comprises 16,000 square feet of socially competitive fun and features. It contains two bespoke nine hole crazy golf courses, no less than five cocktail bars, street-food vendors, and a gin terrace.

This is another one to add to the date night and mate night list. There is plenty to do besides the golf but if you think you are the Tiger Woods of the crazy golf world its time to dig out the argyle socks and prove your worth.

Dig out your DISCO, start loving the lycra, and navigate your neon! You are at the Carwash baby!

Carwash has been storming the globe since 1989 with its joyful and fun approach combined with a colourful up-for-it dress code. It holds the title of Europe’s longest running disco and 80s pop club with residencies in London and Ibiza, and with homes in Paris, Vienna, St Tropez, Geneva and numerous European holiday hot spots.

When you arrive, you’ll be given party accessories by roller-skating show girls, to put you in the mood and get the party started. As well as an opportunity to dress up to the maximum you may also want to pack your swimming costume as there is a pool and jacuzzi in the venue (enter at your own risk!).

Locked in a room

There are lots of variations of the theme all across London and a brilliant way to spend and evening. Very few activities immerse you in a world where you think of nothing except the task at hand.

The rooms vary in complexity, but whatever you choose it’s pure escapism. You may be surprised on how well you automatically pull together into a unified team, unlocking the key to escape. It’s as close as you’ll get to appearing on Crystal Maze.

We’d recommend Locked In A Room which is an unforgettable live escape room experience in London. If you manage to escape, you can’t help but feel smug for the rest of the day. This London 2012 Olympic Games venue is open to the public for adrenalin-fuelled white-water rafting, canoeing and kayaking sessions. Riding the rapids that challenged the world’s best makes for an action-packed experience.

On the centre’s raft adventure, you’ll be high-siding, spinning and nose dunking on the Olympic Standard Competition course. In addition to rafting, the lake, ‘Legacy’ course and ‘Olympic’ course are used for a number of kayaking activities catering for everyone from complete beginners to more proficient paddlers.

New activities include Hydrospeeding, which is similar to bodyboarding, or ‘Hot Dog’ sessions, which are held on two person inflatables and act as a good introduction to kayaking. This industrial-looking underground bunker in Greenwich is the atmospheric setting for a game of laser tag or paintball.

Your mission is to save the world from impending nuclear disaster, which you do by getting kitted out in protective equipment and being armed with either an infra-red laser gun or a paintball gun.

You can also sign up for the ZOMBIE EXPERIENCE. Bunker 51 is home to the intense and immersive Zombie SWAT Training. This 2.5 hour immersive scare experience is run by Apocalypse Events.  You have an hour to eliminate the infected before they escape and end civilisation as we know it.

If you have ever fancied yourself as the next Arnie (or maybe Simon Pegg), this could be the one for you. If you have ever been to a film musical and had the uncontrollable urge to burst into song then this is for you.

The Rocky Horror Picture Show is the campest cult classic of all time and now you can enjoy it like never before. Now with Sing-a-long-a Rocky Horror, you get on-screen lyrics and all the favourite sing-a-long-a features, and it’s never been so much fun.

Your live host will lead you through a choral warm-up, judge the fancy dress competition and award prizes. But, it is YOU, the audience, who are the stars as you howl the night away.

The event takes place at the Price Charles Cinema and it is the perfect opportunity to get dressed up and camp it up. Dig out the suspender belts and big wigs are the order of the day. The more outrageous the better!

Tell me what you want, what you really ,really want. This is it!

The biggest and best 90s night in London. It’s a night of bringing us thirty-something’s back to when we were young. We all remember listening to the top 40 (trying to record our favourite songs on a cassette recorder). Going to your local youth club and dancing to T.U.R.T.L.E Power. Learning Saturday Night in your bedroom whilst necking WKD. It’s a nostalgic and carefree night and we can just go back to being kids again.

Even if you’re one of those annoying millennial, or you were already older when the 90s passed you buy, you can discover what it was to be a kid during the days of cool-Britannia.

They play the greatest 90s songs, from one hit wonders like Crazy For You by Let Loose, to absolute classics like No Scrubs by TLC. Time to dust of your Geri Halliwell Union Jack Dress , wedge shoes and shell suit tracksuits and embrace the night in Concrete, Shoreditch.

If you have inside info about any other wacky, cool, unusual or different things to do in London, let us know below.