Specialising in ‘NoriTacos’, Sugoi JPN has launched plans to expand its operations, with a South Wimbledon site opening next week. 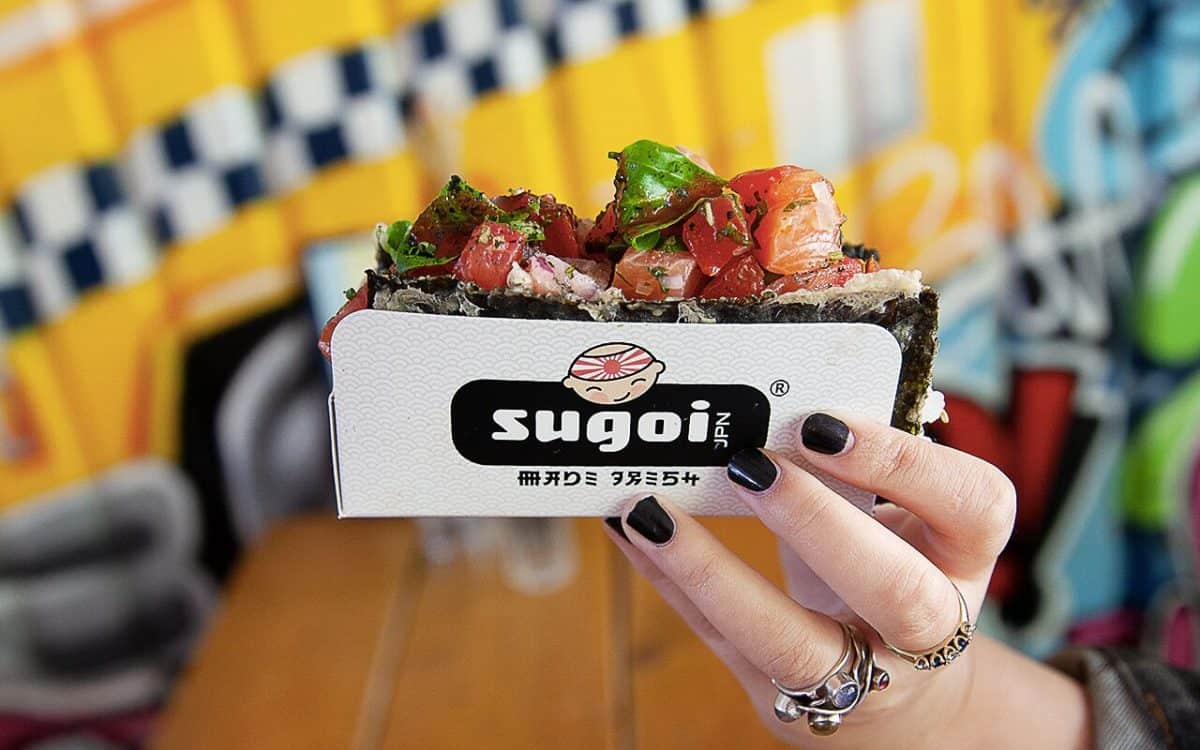 Towards the beginning of 2020, Sugoi JPN had secured a partnership with a national department store, planning to take over the rooftop terrace of their flagship store for the summer. That all changed when COVID-19 hit, however, and the brand had to quickly shift their strategy.

Four months later, Sugoi JPN is now working with The Bench and The Hospitality Portal on a new franchise expansion, planning to launch 10 sites within the next 12 months.

Born from a palpable admiration of Japanese food, Sugoi JPN is a project from husband-and-wife team Felipe Preece and Veronica Silva. After losing everything in 2012, Venezuelan-born Felipe moved to the UK in search of a new job, eventually planning to launch his own restaurant in London.

With a long history of developing Japanese or sushi restaurants worldwide, the pair wanted to produce something different for their new venture. A Japanese superlative linked to the positive admiration of a talent or power, most closely translated as ‘cool’, ‘Sugoi’ prides itself on championing ‘NoriTacos’. Inspired by Tokyo’s Piss Alley and Latin America’s street food stalls, NoriTacos are a hybrid between Japanese nori and Mexican tacos. Firm seaweed tempura shells are packed with rice and various fillings.

Alongside the amiable flavour profile, what’s most surprising is the structural integrity that remains while eating each shell, making it possible to take bites without losing any of the filling. An ideal street-food dish that’s easy to eat on the go. The composition also lends well to delivery, which largely contributes to Sugoi’s custom, even before lockdown.

Of the ten new Sugoi JPN franchises, the first will open next week (Thursday 6th August), taking over a unit at Merton Abbey Mills, South Wimbledon. The second is set to open in Palmers Green on Thursday 27th August. Open from Thursday-to-Sunday, for the time being, the Merton Abbey Mills site will be home to a community terrace for diners to sit and eat, while takeaway will be also available. Delivery will be offered via Deliveroo, within a 2.5 mile radius of the site (SW19 2RD).

Speaking to The London Economic, Sugoi JPN Founder Felipe Preece said: “We couldn’t be more excited and proud to be working with The Bench and The Hospitality Portal for our London expansion strategy. Professionals with extensive hospitality experience, they have the vision and passion we have been looking for and we are confident we will accomplish Sugoi things together. South Wimbledon and Palmers Green are the first of ten dark kitchens we will be launching over the next twelve months and we look forward to welcoming you!”