by Josh Barrie
in Food and Drink, Restaurants 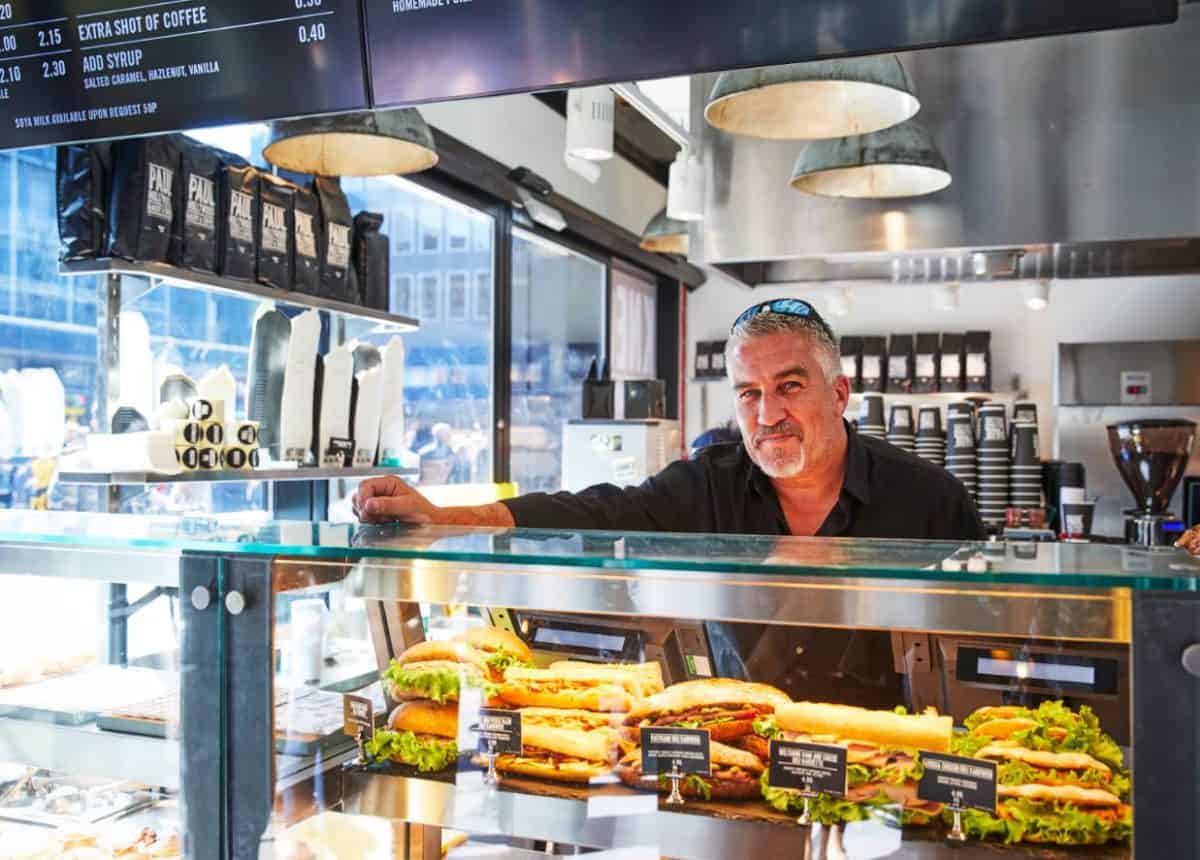 As I inspected my sausage roll’s bottom – searching, of course, for any signs of sogginess – I thought of Paul Hollywood’s.

I thought of Paul Hollywood’s 52-year-old mahogany bottom strolling along a beach in Mauritius. In April, you may have seen the news stories: the Bake Off star whisked his new girlfriend, Summer Monteys-Fullam, 22, off to the sunny island for a tropical getaway. I wouldn’t have taken any notice. But then Summer said this: “You [Hollywood] have turned me from a girl to a woman, and to a house woman”. Christ.

Hollywood’s pork, then. It must be good? I too should have a morsel – not by accompanying the celeb to an island paradise, but by visiting his new cafe at Euston station. It’s called Knead Bakery & Coffee. Perhaps there I would get the Shania Twain treatment; maybe there I’d understand.

I visited Hollywood’s buttery lair on a hot April day. It wasn’t the weather for pie, but I ordered one anyway. His face was everywhere, urging me to invest in pastry. While I waited, I observed the free sausage roll samples on the counter. Grease lined the glistening parchment. I tried a sliver of the original, which costs £3.75 for a regular size, £4.50 for the large – or ‘Boss’, as it is hailed. It was a decent thing: the pork meat was dense and seasoned; the pastry crisp. By all standards, a bake firmly in the middle of Greggs’ budget 90p alternative and an artisan alternative from Borough Market. More Channel 4 than BBC; not yet Channel 5.

The version with chorizo and fennel seeds delivered more thrill. Pork is always enlivened by fennel, and the salt and spice of chorizo also proved an unsurprisingly welcome boost. But perhaps predictably, I found a bottom which was soggy. It was limp and stodgy, like my sausage roll had been sat on the beach, fallen asleep, and then the tide had come in unannounced.

There's nothing better on a chilly winter night than a wholesome pie, minty mushy peas & gravy. All yours for £8.50 ?

And so to the pie, a much paraded article at Knead Bakery. Steak and ale costs more than £8. The pastry, while a reasonably flakey encasement to the meat and unimpressive sauce inside, was dry; the bottom, while beach body ready, was tepid and pale. The steak was tender enough: soft and offering some semblance of flavour. But, not for the first time, I thought of far better pastry things I might acquire at train stations for less than £8.

The mash was so lacking in butter, I’d suggest it being entirely devoid of any at all. Margarine maybe, but in truth I don’t know. It was only gloopy and anaemic and, had I been on a train, I’d have hopped over to the buffet carriage and ordered two, maybe three miniature Absolut vodkas and a tonic water so as to remove myself from the situation. The peas were fine.

Pie thrust aside and my life looking increasingly bleak, I bought a steak slice. Another expensive riff on Greggs. It was bigger than the cult high street staple. It was also £3.25. The pastry was more serious than that of the pie – crispy and fatty and obliging of my desires (my desires being, of course, to find food worthy of the sadness of using Britain’s train station network, which means lots of fat, salt, sugar). The steak was equal to that of the pie: average.

What did I expect from a celebrity cafe? A little more than I got; a little more than a foray into overpriced blandness and large photographs of a silvery haired man. His blue eyes stared at me as I wandered about his Kneady enclave pondering and struggling and thinking about whether to go to Essex on a whim.

Oh of course Britain’s transitory hellholes are pricey. Hollywood alone will command footfall, but surely he’d have wanted to offer a little more than saggy pastry and school dinner mash? Why, when the new Bake Off turned out to be gleeful, would you want a cafe so desultory?

My flat white was good, as was my £2.75 salted caramel brownie, of which I managed two bites (I do not have a sweet tooth). Any more would’ve been sickly, much like Summer’s lurid comment. M&S need not be worried, their sandwiches are safe at Euston.