Following the success of the Soho original, Fatt Pundit has opened a Covent Garden restaurant. 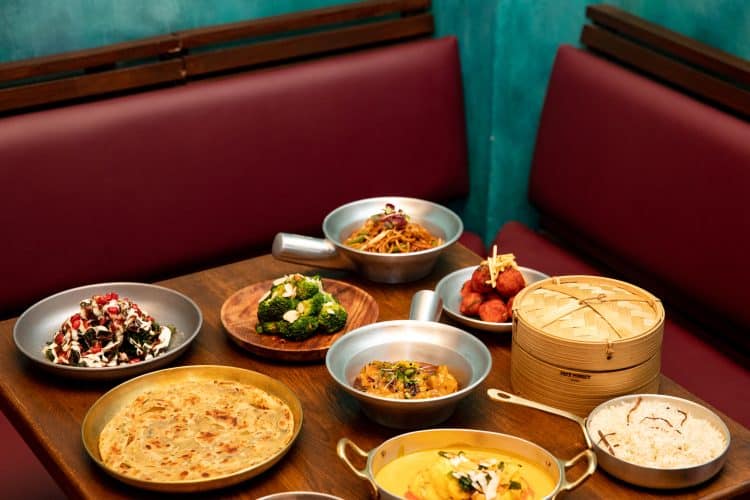 There’s a group of people on the table to my right. From the snatches of conversation I catch, it seems at least some of the group works together and their boss is called Hugo – which is also my name. Before my meal has begun I’m hearing about when I might be sending them back to the office and how they don’t think they’ll ever be going back in five days a week again. I enjoy being transplanted directly into their lives even if, as ever, it is a little unsettling to hear someone we don’t know using our name. For the record, I wouldn’t make them go in five days a week if they didn’t want to. Sadly though, that’s a decision for another Hugo. I notice this because my companion is late. He’s turned up at the Soho branch of Fatt Pundit (which opened in 2019) whereas I’m sat in this year’s iteration in Covent Garden on Maiden Lane just off The Strand. It’s one of those situations when I lay another piece of the puzzle that is London, realising quite how close Embankment is to Covent Garden.

It’s good to arrive early though and being alone gives me time to peruse the menu which tells me that the Indo Chinese cooking served here originated from Kolkata after the Hakka people migrated to India from the Chinese province of Canton. ‘Fatt’ is a Chinese surname combined with the Indian word ‘Pundit’ (scholar). Humorous. And while a marriage of the UK’s two favourite takeaway cuisines might seem slightly unholy, the result is something original and genuinely (to use the dreaded word) authentic.

There are so many cuisines flying around these days that it can be disorienting. In London, amid the constantly escalating competition, we’re largely losing restaurants which are blanket defined by their nationality. Regional cuisine is on the up which is a wonderful thing because there’s so much food to discover. Broad strokes can be oddly reductive.

We start with Momo and I have a feeling these steamed, hearty dumplings are going to become as deeply rooted in our culinary lexicon as foods like gyoza and bao, drifting into familiarity the way these things do (the other day I noted gochujang sauce – it’s a paste – in Itsu which was a little unsettling). The kid goat iteration is particularly good and from here it’s easy to relax into the meal.

Memories of my childhood, being lucky enough to grow up in South East Asia, are of large meals with every dish shared around the table. Every so often on Sundays we would go for dim sum. Special occasions characterised by delicate teas, greasy chopsticks and stained white table cloths. So in some ways I have always been more comfortable with the ad hoc nature of most Asian dining than the three course tradition of Europe.

Dishes arrive as they come in Fatt Pundit, we pick and choose at the impressive range of what lands on the table. Crackling spinach arrives and it’s almost like a pudding says my guest. He’s right – the dish is rich with yoghurt, date and plum sauce, pomegranate seeds. This kind of playfulness is crucial to a restaurant like Fatt Pundit. Similarly there’s a version of duck pancakes but with spice heavy venison, heady and aromatic but still sticky and sweet.

We talk most about the sticky vegetables – crunchy, savoury, sweet and full of spices – one of those increasingly less rare plates of food that makes meat completely irrelevant. There’s a wonderful monkfish curry which is rich, filled with spices and buttery; almost an entire meal in itself served with Bing Bread (not far off a roti) and rice with burnt ginger. Crispy okra is the perfect bar snack spicy and light, crunchy, completely undeniable with a bottle of cold beer.

A brownie arrives to finish – served on a hot plate which sizzles when the sauce is poured over. I’m not really one for gimmicks but then I’m often not one for puddings either. And as a brownie it does the job.

At one stage in the evening the girls on the neighbouring table seem concerned or intrigued about the amount of food we’ve ordered. We get through most of it but both leave groaning and pitching like a galley on the waves. I certainly feel heavier and as though I’ve learnt something along the way, so as a result Fatt Pundit lives up to its name in spades.