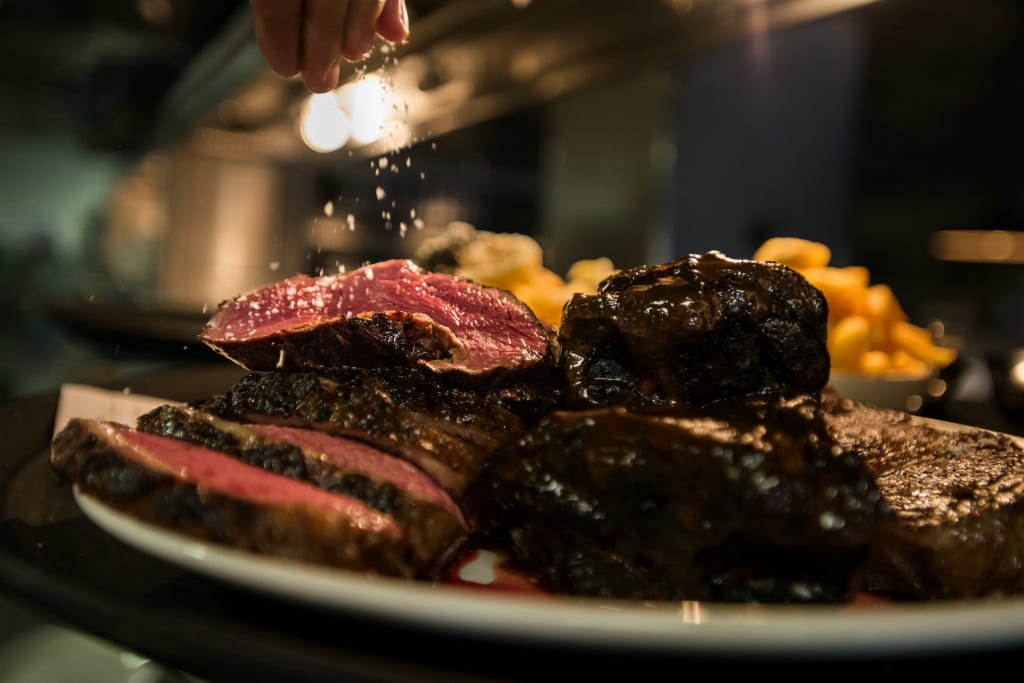 Joining the likes of Kurobuta, Yo! Sushi and Burger & Lobster, Zelman Meats is the latest addition to the fifth floor of Knightsbridge’s Harvey Nichols.

Perched next door to Burger & Lobster, Zelman Meats is also owned by Russian restaurateur Misha Zelman, who also owns a chain of popular steakhouses – Goodman – and the alpha-male Beast in Marylebone. This particular branch, however, seems very much like an overspill space for those wishing to visit Burger & Lobster during peak eating hours, albeit without the time or patience to wait for a table. Inside, the Americanised décor is also remarkably similar to that of Burger & Lobster, not forgetting the similarly limited menus of both restaurants. But instead of being decorated with tanks filled with crustaceans waiting to being boiled or grilled to death, Zelman Meats has a glass-fronted counter that showcases the different meats on offer here.

Not unlike the tourist-trap restaurants that display their menus on boards outside, this meat cabinet is both eye catching and seductive. While it’s clear that the restaurant takes their beef very seriously, it’s hard to avoid the fact that there is not one single cut of British beef on the daily-changing menu during our visit. Sure, the restaurant is based on the New York steakhouses that have become so popular on this side of the pond, so a particular focus on USDA prime beef is expected. It’s also unsurprising to find Japanese Wagyu on the menu at a luxury department store, joined by Australian Blackmore Wagyu which is a brilliant, less-expensive, alternative to the Japanese variety. The specials board’s selection of lesser cuts imported from Australia, nonetheless, is simply odd. What makes it even more concerning is the fact that some absolutely exceptional beef can be found without the need of an airplane or import taxes, with the likes of robust grass-fed Hereford cows and Scotch Aberdeen Angus, all of which can be traced back to the farm that it spent its life on.

Expecting a meat-heavy main, we begin with two appetisers favouring produce from the sea. A dish of tempura prawns showcases plump, well-cooked prawns (even better that the restaurant resists from using the word ‘shrimp’) though the batter is on the thick side. Tiny dice of raw tuna of remarkable freshness are joined by a dash of soy and lime to coax the delicate fish’s flavour even further onto the palate. However, an overabundant helping of avocado, however fresh and delicious, completely overpowers the clean flavours of raw tuna, almost making the most expensive part of the dish seem redundant.

Sampling a selection of the meat specials, a hunk of NY strip loin (better known as Sirloin in the UK) is cooked to near-enough perfection, though the corn-fed beef has a less than pleasant texture; soft, limp and flaccid like Donald Trump’s hair. Far better is the South American Picanha, a fatty cut of beef from the top of the rump that’s prized very highly in Brazil. Served rare and less fatty that expected, this cut has a surprising depth of flavour that speaks for itself when assessing the Beef’s South American popularity. Alas, the accompanying chimichurri sauce does absolutely no justice to the meat, without any punch of chilli or garlic, and tasting a little on the processed side. Finally, from the meat selection, a hunk of slow-cooked short rib is filled with a naturally incredible depth of flavour (forgetting the coating of over-sweet barbecue sauce, which we we’re assured is made in house although it does not taste that way) though the meat would benefit from at least another hour of cooking to make it even nearly as tender as the strip loin.

Sides on offer at Zelman Meats are also worth a mention – charred hispi cabbage is blackened on the grill and smothered with butter and garlic before being topped with finely chopped chilli and anchovies. Alongside the Pichana, it’s the best thing that we eat all evening. Black truffle and parmesan chips, on the other hand, sound exciting on paper but turn out to be topped with a tablespoon of truffle and mushroom mixture from a jar – the very sort that every tourist shop in Rome sells for less than €10. Here, the chips are priced at £9, which is excessive, even for luxury retail standards.

In a market that’s becoming more and more excited by steak, Zelman Meats is not the great American-inspired steakhouse that we’ve all been waiting for. The restaurant does, however, serve comfort food to those looking for a break from shopping, and from next door’s bargain lobsters or overpriced burgers.