A three-month pop-up at St Martins Lane Hotel, The Nitery by Gizzi Erskine offers a playful, joyful ride of flavour. 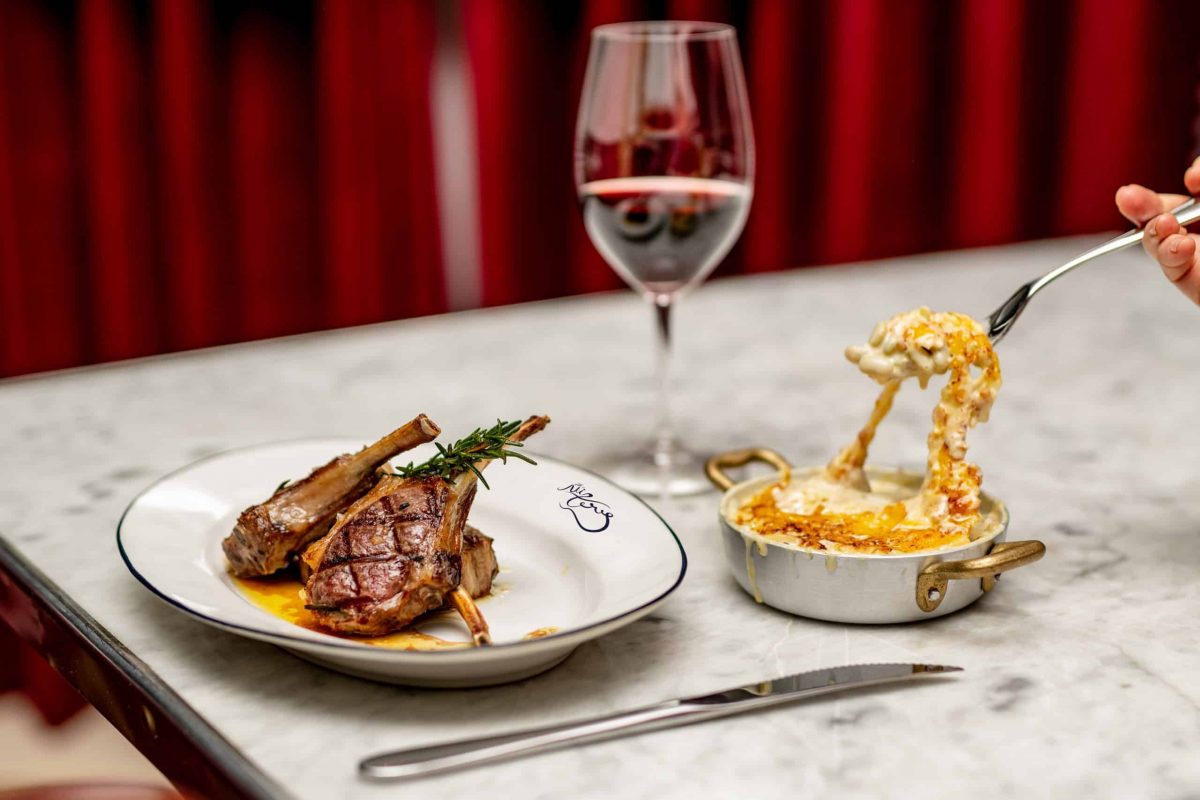 Gizzi Erskine is no stranger to establishing well-received residencies in London. Only last year, the chef co-founded Filth, alongside Rosemary Ferguson – knocking out burgers and junk-less fast food without an animal product in sight.

This time, however, Gizzi has collaborated with St Martins Lane Hotel, taking over the former Asia de Cuba restaurant for a three-month pop-up. The Nitery takes inspiration from early 20th century Parisian ‘niteries’ – hedonistic, bohemian restaurants that popped up all around the city. The lively central London spot is a celebration of originality; reimagining timeless French, American and English fare without the fuss and faff, with ingredient-led and lovingly crafted dishes at its core.

Decor-wise, the space’s midnight blue colour reflects the residence’s name, while the walls are a strong focal point: festooned with large pieces of art created by comedian Noel Fielding, amongst others.

Giving a notable classic a spot on the menu – and rightly so – we kicked off with devilled eggs topped with roast chicken crackling (£4). Giving a nod to the US influence that runs throughout the menu, these coronation-spiced morsels heralded a new take on the retro party canapé.

Starters soon followed, with the scallops (£15), coated in a silky lemon and garlic, plump and seared to a crispy golden hue. Meanwhile, the steak tartare (£12) – an unapologetically refined signature French dish comprising salt-aged Glenarm Estate beef onglette mixed in a gutsy tartare dressing piled high on slightly burnt aged beef-fat brioche – danced on the flavour merry-go-round with the miso-soy cured yolk and salty Marmite dripping cutting through the richness of the dish.

The beauty of this menu lies in the simplicity. At its core, diners can experience comforting, homespun food without the pretentiousness of restaurants of this calibre that frequent the capital. Take the roast chicken dish (£20); a hearty main comprising of shoestring fries (a first-rate carb), bread sauce (a crowd-pleasing accompaniment not just for Christmas), two ample chicken pieces (crisp, and succulent) and watercress – adding colour and peppery notes.

A superlative main were the goat chops (£22); tender and flavoursome, with perfectly seasoned meat effortlessly falling off the bone, served with Flageolets Dauphinoise, featuring creamy beans, and confit garlic, embellished with anchovy and rosemary in an umami rich sauce. A gloriously triumphant combination.

The dessert menu was a nostalgic ride, featuring the likes of sherbet lemon meringue pie; apple tarte tatin, and baked rice pudding (£8). We chose the latter, a stick-to-your-ribs wonderful mélange of cardamom-spiced rice that didn’t scrimp on creaminess. A British pudding stalwart that has stood the test of time. And for good reason.

Cocktails are also worthy of a mention, with the Gizzi’s Gibson (£13) – a muddle of Bombay Gin, pickled onions, and Vermouth – a modern incarnation of Martini’s savoury second cousin.

The Nitery is a playful, joyful ride of flavour, and proves once again that Gizzi Erskine’s knack of confidently cooking exuberant, well put-together dishes is a much-needed breath of fresh air in London’s serious food scene.

The Nitery by Gizzi Erskine can be found at 45 St Martin’s Lane, London, WC2N 4HX.