By Jonathan Hatchman, Food Editor, @TLE_Food When Italian Chef Francesco Mazzei’s famous city restaurant L’Anima was at its initial peak, I was a young teenager, still in school. And like most Brits from a working class background, at that time I was shamefully unadventurous when it came to food, and thus did not – quite […] 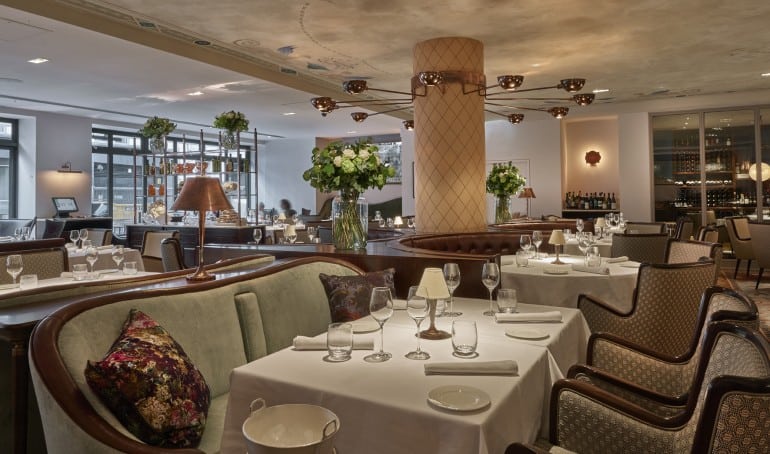 When Italian Chef Francesco Mazzei’s famous city restaurant L’Anima was at its initial peak, I was a young teenager, still in school. And like most Brits from a working class background, at that time I was shamefully unadventurous when it came to food, and thus did not – quite sadly – manage to experience the Chef’s cooking at the pinnacle of his acclaim. Eight years on, however, things have changed and Mazzei has recently taken over as Executive Chef at the recently reopened Sartoria (literally meaning ‘tailoring’ in Italian) named after its location on the corner of Mayfair’s Saville Row.

Inside, the restaurant is overwhelmingly warm in contrast to the cool January climate outside. Entering through a sleek bar area and into the vast, dark dining space bedecked with lavish armchairs and plush cushions, set against a sea of pristine white table cloths – it’s all very grand. As for the staff, the sommelier was the first member of front of house to himself soon after being seated. The somewhat legendary Sommelier Michael Simms – a comfortingly friendly gentleman dressed in formal attire. He may have looked more suited to the job of Maître d’ in 20th century Paris, but his gentle British accent was deeply reassuring and his presence and warm hospitality enough to warrant him a contender for London’s most pleasant member of restaurant staff. “Please let me know if you’d like any more wine, or if you don’t like my choices,” he insists, “or do let me know if you’d like me to shut up and leave you in peace to enjoy your meals.”

Unfortunately, none of the other waiters were as courteous to offer the option of the latter, constantly attending to us and, instead, offering to attend to every single unnecessary need, so much so that we’re rarely unaccompanied for the whole three-hour dinner. One of the waiters even insists on arguing over which of our starters was better after we’ve eaten them. While the lobster tagliolini from Mazzei’s Calabrian-inspired menu was amply pleasant, the shells of thin tortelli bursting with milky burrata, from my starter. Accompanied by very subtle ‘nduja, butter emulsion, a heavy handed shaving of parmesan, and aged balsamic vinegar – it was the best thing that we ate all evening – much to the waiter’s disdain. The lobster dish featured strips of perfectly cooked tagliolini in a delicious lobster sauce spiked with tomato, also delicious but would have been plentiful enough without the added addition of a half-lobster still in its shell. And although prepared conveniently, separating the tail from the shell and unearthing the claw, it’s practically impossible to eat a whole lobster tail with just a fork and spoon.

For the mains, the chef’s signature dish of cured cod with licorice was an inspired choice. A thick tranche of fish served with various pickings of pretty foliage was cooked perfectly. Alas, this combination of fishy salinity and licorice sweetness does not work for my tastes, but was very much enjoyed by my girlfriend. As for my fritto misto platter, various slabs of fried white fish were good, as were the king prawns, but the juicy langoustine and squid (both calamari and tentacles) we’re the jewel in the dish’s crown, all of which were complimented by the aforementioned sommelier’s wine choice, working as a magnificent palate cleanser. If only the one accompaniment of greenery had not also come from the fryer, my arteries would have been less likely to feel like collapsing on my way home. In fairness, the matchstick slivers of courgette cut into frites, lightly battered and fried, we’re very, very tasty, although unnecessary with this dish. What’s even more peculiar is the waiter’s choice to insist that we must taste a portion, albeit having already inadvertently ordered enough. Thus resulting in a huge bowl almost filled with the fried zucchini making its way back to the kitchen uneaten and wasted, again much to the waiter’s disappointment. The case was the same with the Zabaglione for two to share, arriving at the table encased within a gargantuan mixing bowl filled with enough liquid to have bathed a family of five. The rich sweetness of the sugar, egg yolks and dessert wine was a great success, as far as the dessert that’s all to often avoided in Italian restaurant kitchens was concerned, but after one large glass it was remarkably difficult to complete the bowl in order to keep the kitchen happy. “Sir, that’s an awful lot of Zabaglione to send back to the kitchen,” snorted the snootiest of waiters: to which one could but reply, “Yes, but given how much we’ve been encouraged to order before now, that was an awful lot of Zabaglione to sent out to the table in the first place.”

In summary, the Francesco Mazzei’s menu at Sartoria is commendably accomplished and comfortingly classic, while the sommelier’s wine pairing skills and approachability are also worth a mention. Alas, you’ll have to be firm with the waiting staff in order to fully enjoy the overall experience and the reputable food that’s served.

Sartoria can be found at 20 Saville Row, London, W1S 3PR.