By Jonathan Hatchman, Food Editor, @TLE_Food With each passing year, it’s always commonplace for the world of foodies, bloggers and critics to cast their presumptuous predictions for food and restaurant trends to bloom and flourish across the next 12 months. One of those trends that’s been prominent with forecasts for 2016 is the rising popularity […] 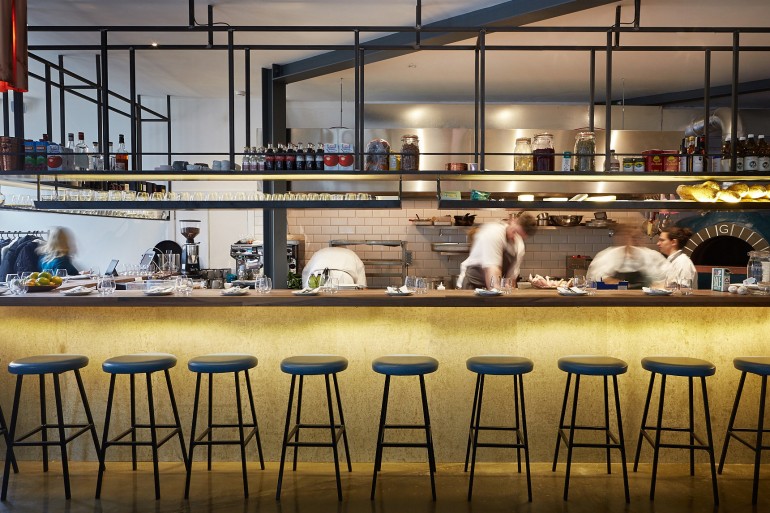 With each passing year, it’s always commonplace for the world of foodies, bloggers and critics to cast their presumptuous predictions for food and restaurant trends to bloom and flourish across the next 12 months. One of those trends that’s been prominent with forecasts for 2016 is the rising popularity of Middle-Eastern food in London. Throughout last year a number of restaurants with this particular focus opened their doors to wide acclaim, including The Palomar that’s brought the food of modern day Jerusalem to central London, through to the likes of Thrash Metal inspired Turkish in the form of Highbury’s Black Axe Mangal. Another of these to open towards the end of the year, just in time for for 2016, was Oklava. Located on a Shoreditch back street just between Old Street and the City, this restaurant was opened by acclaimed chef Selin Kiazim, using her Turkish-Cypriot heritage as the main focus in order to create a contemporary take on the classic cuisine of both nations.

The menu is comprised of tea-plate sized portions intended for sharing, with two-three dishes suggested per diner, sporadically arriving at the table in the order that they’re ready to leave the kitchen. While deciding, two slices of bread with the aesthetic vibrancy of fresh concrete arrived at the table alongside a knob of Medjool date butter that looked like a miniature Christmas pudding. Fortuitously, the bread’s flavour was far better than appearances would have suggested, and the sweet butter was a resplendent breath of fresh air, an inspired creation (it’s also available to buy and take home in Selfridges). Crostini topped with a mound of whipped feta cheese and a thin slice of candied pumpkin was satisfying, with the pumpkin offering a complimentary sweetness to the cheese and a touch of dried chilli. A dish of olives, alas, we’re less than pleasant with all the salinity of a pint of water poured fresh from the Dead Sea.

One of the best things that we ate during our visit was a dish with pearl barley as its key component. An ingredient that’s all too often used most criminally in Britain, generally added to all sorts of soups, stews and casseroles in such vast quantities that dishes that should be warming, hearty, and comforting all end up texturally resembling a bowl of sugar puffs drowned in chicken stock. Here, however, the pearl barley is cooked and served with a less disturbing texture, accompanied by slivers of onion and sour cherry to add an exciting flavour to the dish, which is topped with sheep’s cheese and a sprinkling of crunchy fried kale – the go-to ingredient that’s trendiness fails to fizzle out with each passing year. Another particularly interesting dish at Oklava is the elliptical pide with its canoe-shaped base topped with beef short rib, that although having been cooked perfectly, lacks the spice that’s promised on the menu. Instead one of the four slices was topped with a smattering of green chillies, adding an element of acidity more than that of spice.

Acidity was also present within the lamb breast dish, albeit the lactic sort produced by the ocean of yoghurt at the bottom of the dish. So much yoghurt, in fact, that a doggy bag of the remnants would have amply provided my breakfast for the entire following week. The crispy pomegranate glaze was also untraceable, most probably due to the blanket of yoghurt, resulting in a brilliant cut of meat delivering an underwhelming overall flavour. Lamb kofte was a better, but the spice as promised by the title still felt considerably restrained, although the spicing for this dish did seem the most appropriate of everything we ate, and the blushing lamb’s accompaniment of sour cherry dressing was far more appetising than the yoghurt.

Desserts include the likes of less traditional rice pudding with rum jelly, and pistachio sponge, but by the time our final dish was devoured, desserts were completely unnecessary. Kiazim’s food does manage to showcase and abundance of skill and promise, and many of the flavour combinations are as inspired as they are palatable. Alas, this feels very much like a Turkish restaurant especially crafted for English people. If only the kitchen staff would openly embrace the bigger, bolder, more adventurous flavours and spices to further accentuate the striking flair of the otherwise impressive cooking at Oklava.