When Adam Handling opened The Frog in the grounds of the Old Truman Brewery, the chef’s menu was ambitious to say the least. At the chef’s first restaurant proper – following a stint at Caxton – Handling demolished the rule book, demonstrating skilled fine dining technique with dishes to be enjoyed in an intentionally casual, […] 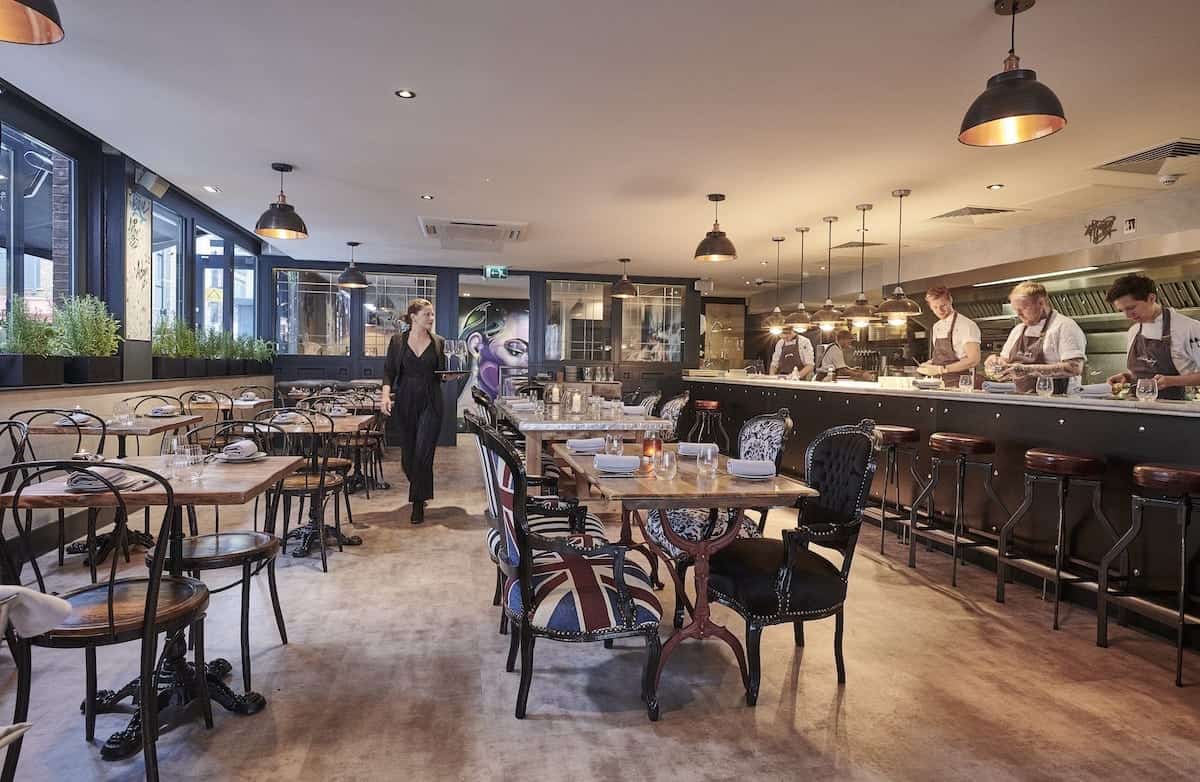 When Adam Handling opened The Frog in the grounds of the Old Truman Brewery, the chef’s menu was ambitious to say the least. At the chef’s first restaurant proper – following a stint at Caxton – Handling demolished the rule book, demonstrating skilled fine dining technique with dishes to be enjoyed in an intentionally casual, comfortable space. Street art adorned the walls while 1990s hip-hop sound-tracked the gastro parade of powders, smears and intense fermentations.

Although the restaurant’s initial critical response was mixed, The Frog was a resounding success. The opening of Bean & Wheat (a zero-waste café, utilising otherwise wasted ingredients from the restaurant) soon followed, quickly pursued by Frog by Adam Handling – the group’s flagship restaurant – in Covent Garden. Now, with the lease expiration of the original restaurant, The Frog has leaped over to Hoxton. This new guise features three establishments all under one roof, but effectively on different streets. Accessible via Hoxton Square, the new restaurant is still awash with vibrant street art murals, with a long open kitchen stretching the majority of the dining room’s length. Downstairs, Iron Stag bar has a prominent focus on whisky, while the new Bean & Wheat continues to employ kitchen waste, with a prominent focus on coffee and beer. Approximately 200 beers are currently available.

As was the case at The Frog E1, the general atmosphere in the new restaurant is very casual, aided by the frequent homages to the area’s rich street art culture. Service also heavily contributes to the overall experience. Most dishes are served by well-presented chefs, quickly running through each element of the dish, while other front of house staff discretely work the floor: attentive, friendly, but unobtrusive. Moreover, the cooking here is louder than the apocalypse, but with Handling’s trademark sharp fine dining edge: unconventionally stripping the entire experience of pomp and ceremony. The food is undoubtedly the key focus, rife with advanced technique and eminently edible.

Dinner begins with a compendium of snacks. Crackers topped with a melange of diced, barbecued carrot are accompanied by hazelnuts and bolstered by a whisper of mint; beer chips – like high end Quavers – are served upstanding in a tureen of silky smoked cod’s roe. The Frog’s famous chicken butter occupies an entire course on the eight-course tasting menu (sensibly priced at £50 per person). Served with a warm sourdough loaf, the heavily salted butter is embellished with shards of crispy skin and an intense chicken gravy: transcendently insalubrious. Carnal, almost.

A dish dedicated to Handling’s mother, having turned vegetarian shortly after the opening of the chef’s first restaurant, features slivers of celeriac which lead a forcefully flavoursome concoction of raw apple, dates and a dusting of Australian truffle – though the egg yolk element seems entirely absent. A tartlet of spiced brown shrimp boasts good short-crust pastry, though the egg-enriched filling is somewhat challenging. Far better is the plaice schnitzel, well-cooked and crowned with micro parsley and finely sliced shallots.

The menu’s pork main is one of the best things eaten here. A hunk of Iberico presa is cooked pink, served with a puree of roasted cauliflower and cauliflower kimchi which uses the vegetable’s leaves, so often discarded. In addition to the main dish, scraps of crispy pig skin are also served alongside a couple of succulent pork ribs – giving, but not cooked to the point of overworked schmaltz. The pork also pairs exceptionally with a gluggable Australian Pinot Noir from Jamsheed.

The savoury portion of The Frog’s tasting menu concludes with an additional helping of cheese doughnuts – a firm favourite of Adam Handling’s restaurants. Spheres of fried dough are piped with molten cheese then torrentially showered with grated parmesan. Although the lavish addition of truffle has been lost as the dish has evolved over time, The Frog’s cheese doughnuts are still one of my all-time favourite things to eat in London.

The tasting menu concludes with a choice of three desserts. Chocolate and tofu mousse has stern decadence, tamed by cubes of syrupy pistachio cake and sweet black cherry sorbet. Another dessert simply titled ‘White chocolate, cucumber, dill’ showcases one final flourish of contemporary flair. Built around a rocher of tempered white chocolate, the dish is embellished with some crumbled meringue, dill fronds and marbles of cucumber; complete with freeze dried cucumber offsetting the sweetness of white chocolate. A refreshing end to dinner at The Frog’s new habitat: a strong new addition to Adam Handling’s expanding empire.