Of London’s various ills, the tube’s Central line is amongst the ugliest. Though the trains aren’t succumbed to constant disruption and the seats harbour less dust than the Bakerloo, the choice of devil-red as the line’s colour key does not appear coincidental (generally associated with heat and rage). Over crowded, under-lit and hotter than the […] 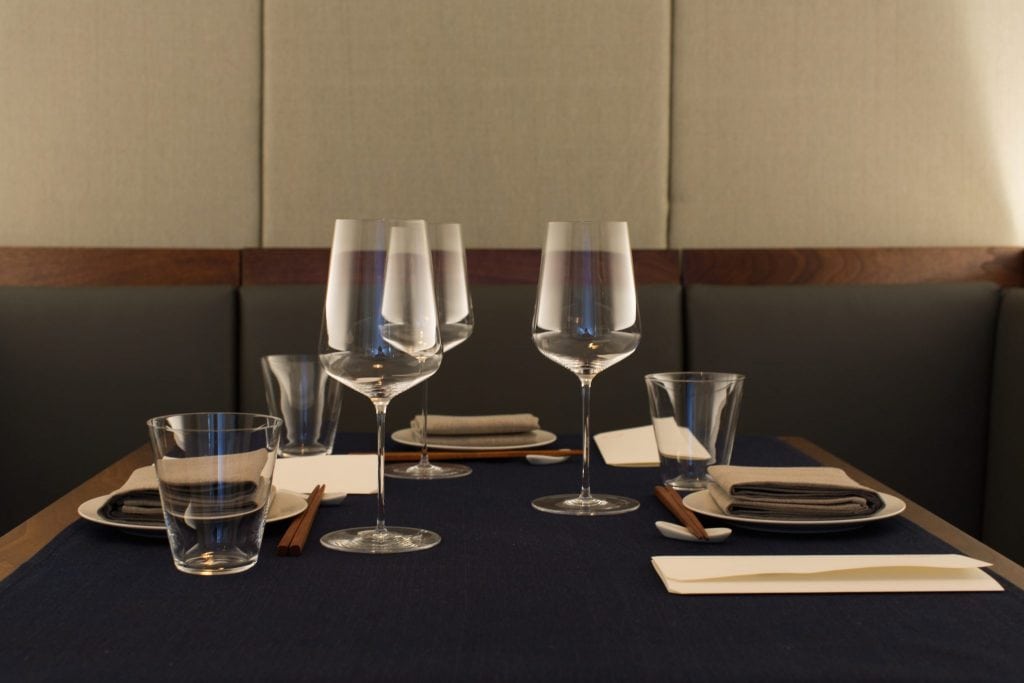 Of London’s various ills, the tube’s Central line is amongst the ugliest.

Though the trains aren’t succumbed to constant disruption and the seats harbour less dust than the Bakerloo, the choice of devil-red as the line’s colour key does not appear coincidental (generally associated with heat and rage). Over crowded, under-lit and hotter than the filling of a McDonald’s apple pie; each train is a 272-seat anxiety attack, rattling through tunnels so deep that a collision with the Earth’s core (and its tremendous heat) seems imminent.

Just before Christmas, I visited Flat Three – a restaurant born from an experimental supper club, serving Japanese-Nordic fusion food with a touch of Korean influence, near Holland Park station – exclusively serviced by the Central line. After escaping the station, the restaurant is a stone’s throw away, perched on an unassuming corner that’s easy to miss. The only tell-tale sign is warning taped to the ‘heavy vintage door’, leading downstairs to the underground restaurant space. Inside, an open kitchen greets customers, filled with seemingly calm chefs plating blocks of gelatinous tofu, picking fronds from comely edible flowers or grilling expensive cuts of beef.

Let’s get one thing out of the way early: the small-plates at Flat Three, intended for sharing, are generally expensive. However, we know by now that food of this quality comes with either a high price tag, or an exceptionally long queue that snakes around the block. Here, at least, nobody suffers from the severe inconvenience of waiting three hours for dinner. Besides, for any die-hard food blogger – what price can be affixed to an Instagram-friendly fix of #foodporn?

There is also the matter of fusing elements of both Japanese and Nordic cuisine. The alliance does seem initially bizarre – yet with a mutual respect for the elements, as well as for fish, fermentation and smoking, this peculiar marriage is surprisingly convenient. Composed mainly of light, hard-wood furniture, the dining space at Flat Three, although clean and minimalist with a nod to Scandinavian comfort, is a potential acoustic nightmare. After taking a seat at one of the space’s only booths, we begin with a tartar of Carabinero prawns (£17), pressed into the centre of a stone plate and accompanied by a slim, greaseless prawn cracker. Making use of the lavish scarlet prawns, this tartar also employs a heavy-handed addition of finely diced cucumber, bringing freshness to the dish and working in harmony with the prawns.

A tranche of sea bass is cooked well, though it is the pool of brackish fermented cauliflower broth that’s most alluring. Crystal clear with a sapid taste of cauliflower, this particular element demonstrates the level of gustatory skill that’s expected when charging £26 for an otherwise unaccompanied fillet of fish. Elsewhere, a vegetarian dish of kabocha squash (£12) is the best thing we eat, by quite some margin. A wedge of ‘Japanese pumpkin’ is served charred, skin on and cooked to a degree that boasts a pleasant chestnut texture. It’s the intense earthiness, nonetheless, that’s most surprising in comparison to often bland pumpkin, accompanied by almond miso with oceanic depth of flavour that complements the squash.

Just one grade down from extravagant Japanese Kobe beef, the Wagyu here is not the same as that minced and forced into burgers sold for pittance in bargain super markets. This particular cow is bred in Japan and lives a contented, relaxed (often drunk) life, which is reflected in the taste. This beef is of such astounding quality that even Wagyu ‘yakinuku’ (£30) cut from the short rib, a considerably less expensive cut, is tender when served medium-rare, all without the necessity of long, slow cooking. In addition to the tenderness, the Wagyu short rib has plenty of intramuscular fat, lending an extreme richness when served simply, unlike many other premium cuts of steak. Here, it is accompanied by some lightly pickled slivers of daikon.

Our dessert, a tofu sorbet (£6), arrives looking as though plucked from the set of a cruel television game show. The sorbet is made in-house and has an overwhelming taste of soy, which is fine for those fond of tofu. Thankfully, there’s a blob of tart pomegranate gel to slice through the tofu, plus a smattering of large wood ants. Although visually unappealing, the flavour from the ants is sensational – boasting a citric burst that’s not dissimilar from expensive Japanese yuzu.

Dining at Flat Three, it’s particularly easy to become excited and over-order, inevitably leading to a colossal cost build up. Yet with such quality of produce and flagrant respect for ingredients showcased – most food sampled is worth saving up for, not to mention braving the abhorrent Central Line.