By Terry Siddall The Cubana has had a presence in Sheffield for some fifteen years and gained a good reputation for its authentic Spanish/Latin tapas menu. Leopold Square where the Cubana restaurant and bar is situated is in the heart of Sheffield city centre where Leopold Street meets the end of West Street. The square is […] 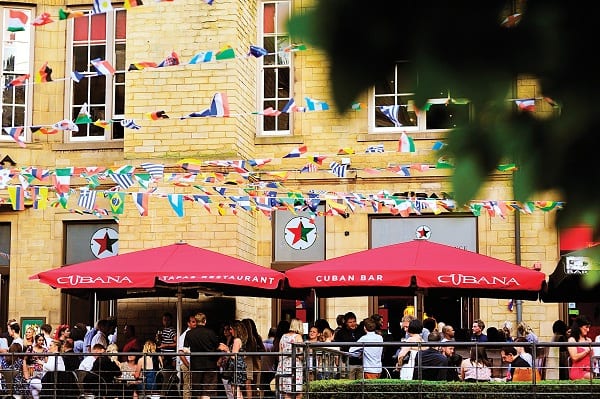 The Cubana has had a presence in Sheffield for some fifteen years and gained a good reputation for its authentic Spanish/Latin tapas menu.

Leopold Square where the Cubana restaurant and bar is situated is in the heart of Sheffield city centre where Leopold Street meets the end of West Street. The square is fairly close to the two main theatres in Sheffield, that of the Crucible and the Lyceum and has easy access to bus, tram stops and taxi ranks. Parking is also not too difficult fairly close by. The buildings of the square were once part of the Sheffield’s Central Technical School, and later council offices and are a group of elegant grade two listed buildings now converted to form a hub of bars and eateries enclosing a public paved area.

There is an outside eating area within the square but this being a February evening and extremely cold with an icy chill we decided perhaps not this time.

The CUBANA is a two storey establishment. The main entrance leads to the Bar, a large open room which occupies the ground floor Latino inspired artefacts and distressed looking wooden tables. We took a left turn through double doors and up the stairs to the Restaurant on the first floor. A lift is in place here should it be needed.

We were warmly welcomed as we entered the restaurant and shown to our table. After the cold outside it was an inviting and friendly environment. The décor and the background music were distinctly Latino. The wooden tables and floor giving a feeling of Cuban austerity and a Cuban flag flew over the bar at which customers waiting for a table could have a drink. Impressions were very good the only downside being the light. This though is a personal thing, like many restaurants it was dimly lit and I had to use my newly prescribed varifocals to decide what I was going to eat. We were offered Pan De Ajo Y Aceitunas (Olives and Garlic bread) as a starter, which we accepted whilst we made our choices of what to eat and drink. There was a huge selection of rum on offer, in fact 164 different kinds of rum, a decent wine list and a variety of cocktails but we both settled for a beer. A good manly pint for myself, and a delicate half measure for my wife.

With time now to relax in our seats we were able to take in the ambience of the room. The restaurant is large with walls painted to look like windows with shutters. To my right was hung a photograph of an overweight gentleman with a vest and braces wearing a flat cap. It wasn’t Fidel but for some reason he did look Cuban. The restaurant was quiet at first (we had arrived at 7pm) but still had an air of informality as the Latino music played comfortably in the background.

The waiter and waitresses were friendly and polite and seemed very intent on you enjoying your experience and there was a certain energy to the place. The Menu offered Tapas Dishes both hot and cold with a choice of Seafood, Meat or Vegetarian. My wife counted 44 different ones but I couldn’t possibly comment. As a guide the menu asked ‘How Hungry are You?’ And according to your answer suggested.

I persuaded my partner that she was hungry and then I could avoid being famished. So we settled on eight dishes. Even so it was hard to choose from such an extensive menu as so many dishes were tempting and could not possibly have tasted them all, but we settled on a variety of dishes involving Ribs, Paella, Potatoes, Prawns, Hake, Mushrooms and Choriza.

My wife’s favourite was the Merluza Salsa Sambuca – which was fresh fillet of hake served with fresh tomatoes and a creamy Sambuca sauce the fish was chunky and well cooked with a piquant sauce, another favourite was the Champinones Con Queso – Mushrooms with spinach and strong goats cheese which again was very tasty and a good sized portion.

I enjoyed the Chorizo Y Huevo Con Patatas – crispy potatoes sautéed with spicy Choriza which arrived first and was speedily consumed as I was very hungry, and the smells from the kitchen were tempting the taste buds. This dish was spicy but not chilli hot very flavourful, I also dipped in and out of the Gambas Tigres which was individual prawns wrapped in filo pastry and garlic dipping sauce. The least favourite was the chicken and chorizo, but that was a personal thing as my wife thought it very good.

The food arrived promptly after ordering, and mostly came together so we were not left waiting, and the portions were generous. We succeeded in clearing the plates well, and felt very replete afterwards. The variety of tapas is excellent and the service was friendly with a variety of waiters and waitresses asking if we enjoyed it and if we were ok. It felt as if we were experiencing a true Latin inspired evening with good ambience. As we were near the entrance noted that as people arrived and the restaurant filled up, people who had not booked were equally made to feel as welcome as those who had booked and tables found for them. There was a large gathering on one table, and the feel of the restaurant picked up a pace once more tables were filled and the band came in at about 8pm this included four instrumentalists and a singer. They set themselves up by the window, and starting to tune up. Unfortunately by then it was time for us to leave as we had no space for a Sweet course but it was offered as was coffee or more drinks.

This was a great evening especially suggest booking after 8 pm when we were told every evening there is a live band. As tapas is ordered by the dish the cost ranged from £4.95- £7.25 for hot tapas and £2.95 – £6.75 for cold tapas with equally well priced side dishes. There is an option for set meals for two to save you having to decide and they were good value since they includes 10 – 11 individual dishes.

If visiting the Cubana restaurant it is well worth visiting their vibrant web site as this will tell you what type of music will be played on what evening anything from Latin music, jazz and afro magic and more. From reading other reviews some impromptu salsa or any type of dancing may break out.