Enter Night Pilsner is a collaboration between Metallica and Arrogant Consortia, an imprint of Stone Brewing. 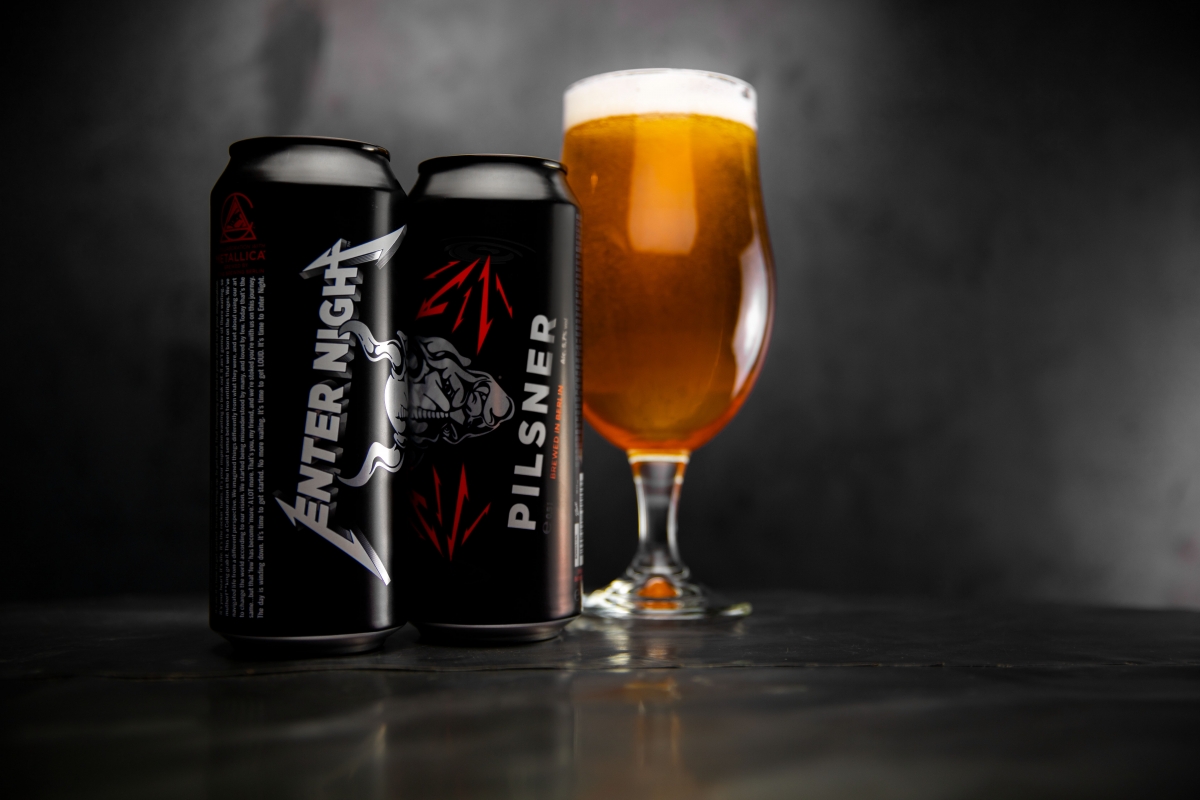 Collaborations between breweries and musicians is not a new trend. Live music and beer are an omnipresent coupling, so it’s hardly surprising that so many bands have attempted to brew their own beers.

Launched in 2013, Iron Maiden’s Trooper Ale, brewed in collaboration with Robinson’s brewery in Stockport, has become one of the UK’s most popular examples – having sold over 20 million pints. To celebrate the 40th anniversary of ‘Bohemian Rhapsody’, the living members of Queen released an uninspired ‘Bohemian Lager’; finding yet another opportunity to cash-in, KISS have also released their own beer. Bands such as Anthrax, Mastodon and Municipal Waste have also released successful beers, each considerably better than they need to be.

To coincide with their current WorldWired Tour, Metallica have launched ‘Enter Night’ Pilsner in collaboration with Arrogant Consortia, an imprint of Stone Brewing.  Founded by Greg Koch and Steve Wagner in 1996, the San Diego County brewery has become one of the largest craft breweries in the US, currently distributing their beers to over 40 countries. After looking at more than 130 sites in nine different countries, the brewery launched Stone Brewing Berlin in 2016, taking over a 1901 gasworks facility, now home to a fully-operational 100-hectoliter brew house, packaging hall, restaurant, retail store and administrative offices. After initially distributing Berlin-brewed beers to 30 European countries, five of the brewery’s core beers are now brewed and packaged in Berlin, including Stone IPA and Arrogant Consortia mainstays, Arrogant Bastard Ale and Enter Night Pilsner.

Named after a lyric from ‘Enter Sandman’ – the first single release from the band’s 1991 album, and arguably one of their most famous songs – Enter Night is a dry-hopped Pilsner, with the inception having featured direct input from the Metallica band members alongside Stone Brewing’s crew. On the launch of Enter Night, Metallica drummer Lars Ulrich said: “The amount of ideals and outlooks that Metallica and Stone Brewing share are endless. I’m always blown away about how similar our paths forward have been. Our view of the worlds that we each inhabit, of creativity and process, and sense of place in relation to our peers and ‘The Man’ are almost identical. We saw how much our fans liked Enter Night Pilsner on the US tour, and we’re thrilled to be able to share it with fans during the European tour as well.”

Stone Brewing co-founder Greg Koch added: “I remember seeing Metallica on the cover of a magazine just after the Black Album was released. On the cover was a quote that resonated with me to this day: ‘Metallica didn’t go to number one, number one came to them.’ I loved what that meant. Do it your way and never compromise your art. If you’re great at what you do people will come. I view that simple quote as one of the founding philosophical elements of Stone Brewing.”

On pour, the pale gold liquid has aromas of pale malts, white bread, hay and some herbal and citrus hop notes. Zippy citrus savours continue on the palate, joined by a well-balanced orchestra of further herbal notes, cereal and honey with a whisper of lemon grass. With medium body and pleasant carbonation, Enter Night’s finish is exceptionally clean with an encore of feint, refreshing bitterness – almost as though designed to be enjoyed within some of the globe’s most impressive open-air stadiums. Both a highly drinkable beer and a band/brewery collaboration of rare quality.