Britain’s smallest microbrewery is producing 1,000 pints a week – from inside a garden shed. The Bulletproof Brew Co has been created in the back garden of founder Patrick Lawrence’s mum’s house. Mr Lawrence and co-director Connor Johnson are now struggling to cope with demand and say the 400 litres of German-style craft lager they […] 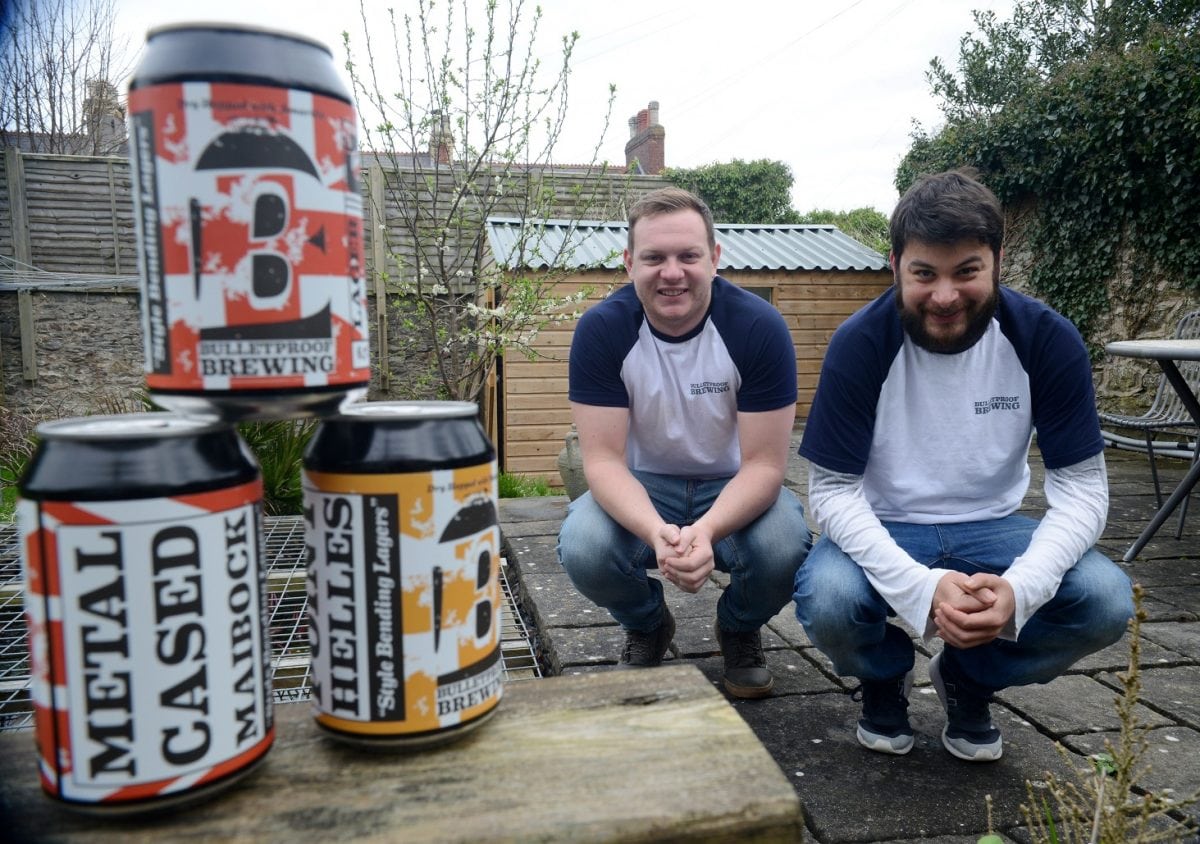 Patrick Lawrence (right) and Connor Johnson who run a micro brewery business from a garden shed. See SWNS story SWSHED; It gives the term beer garden a whole new meaning - Plymouth's newest microbrewery is in a backyard shed. The Bulletproof Brew Co has been created in the back garden of liquor entrepreneur Patrick Lawrence's mum's city centre house. And it's pumping out 400 litres of German-style craft lager every week. That's 1,200 "stubby" 330ml cans – the container of choice for the emerging craft beer industry. Mr Lawrence and co-director Connor Johnson now want to grow the one-year-old firm – because they are already having problems meeting demand.

Britain’s smallest microbrewery is producing 1,000 pints a week – from inside a garden shed.

The Bulletproof Brew Co has been created in the back garden of founder Patrick Lawrence’s mum’s house.

Mr Lawrence and co-director Connor Johnson are now struggling to cope with demand and say the 400 litres of German-style craft lager they are able to pump out every week is being snapped up.

Their products – Hollow Point Helles, Schwarz Beer, and the 6.7 per cent ABV Metal Base Maibock – are selling out in local bars, shops and restaurants.

Mr Lawrence, of Plymouth, Devon, has been brewing his own lager for five years, but a year ago decided to go professional and set up the business. He teamed up with Connor as they were already friends after meeting while they both worked as a bar tender.

He said: “I looked around for a (business) space, but they are very expensive so I set up in the back of my parents’ house.”

They then imported £11,000 of top of the range brewing gear from the USA to build the small but efficient production suite.

But the investment has been more than paying off. The brew, however, has to sit for seven weeks – more than twice as long as ale – before it can be canned, which is done at a plant in Hereford.

They’re already impressed a legion of lager lovers in venues in their home city of Plymouth, Devon, including The Treasury, Bread and Roses, the Greedy Goose and the new Vessel Beer Shop.

There are now big plans for Bulletproof Brew Co.

Mr Lawrence, who is also a graphic designer and responsible for the lagers’ names and branding, said: “Being a small craft brewery we can’t make as much as we need to keep up with demand.

“The Maibock is really strong, but the Helles is a session lager, not as strong, you can drink a few pints.