University of Sussex Flat Earth Society are expecting to host more than 800 people at their first ever official ball - which will see students and like-minded thinkers gather to talk about how they think the earth is not round. 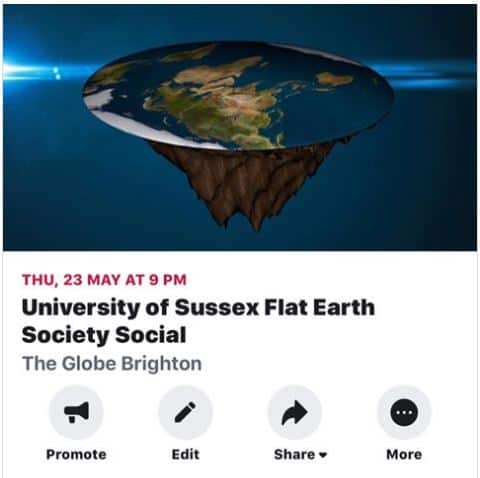 A top university ‘Flat Earth Society’ have announced round table chat at a local boozer – called The GLOBE.

University of Sussex Flat Earth Society will be hoping not to have to get a round in at a ball they are holding – expecting to host more than 800 flat-earthers.

The Flat Earth Movement has always rumbled in the background, despite being proved in the 1520s by explorers Ferdinand Magellan and Juan Sebastian Elcano, who completed the first circumnavigation of the globe.

In recent years, thanks to web jokers, the Flat Earth movement has grown exponentially, and cheeky ‘Flat Earthers’ have causing rational scientists no end of grief by refusing to accept the planet is anything but flat.

The tongue-in-cheek Brighton-based Uni club was founded last year, and members are set to start getting the rounds in from 9pm tonight at The Globe pub in the East Sussex town – after being overwhelmed by the interest in their silly society.

But a spokesperson reckons their popularity could become their downfall, because he fears the extra weight of 800 people in one pub could cause the planetoid disc to tilt – and eventually slide them off.

A spokesperson for the barmy club said: “As you perhaps are aware, our first public social at The Globe has proven to be a hit which is fantastic news for our ever growing society.

“However, the committee is becoming increasingly concerned with the sheer number of attendees.

“Due to the nature of the earth, having a large number of people confined into one space runs a heavy risk of the Earth tilting.

“The result? All 800 of us falling off the earth and into space. We are looking for ways to combat this issue.

“Our committee has decided that we need to be evenly distributed and not make any sudden movements.

“Any sudden rampage of heavy feet runs a risk towards humanity falling, literally.

“We ask those of you who are attending to walk slowly with no sudden movement.

“Secondly, pre-existing members of the society we would be very grateful for you to act as ushers to prevent such tragedy from occurring.”

Some locals and Round Earth enthusiasts complained online about their ‘logic.’

One commenter, writing under the name ‘Morpheus’, said: “I doubt you could find the pub even if the earth was flat! You clearly have no ability to understand any science.

“The greenhouse effect is not due to CO2 is due to gravity compressing the atmosphere.

“There would be no gravity if everything was flat! Do pay more attention in future.”

Roland Pratt wrote: “Look, if the Earth was flat, cats would have knocked everything off the edge by now.”