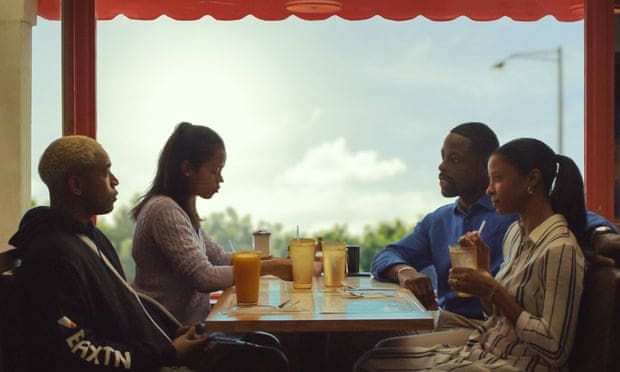 Generational chasms, race and class preoccupy director Trey Edward Shults’ third filmWaves. At just 31, Shults is carving-out for himself a niche filming style, using immersive POV shots to showcase the psychological delineations of his characters, usually placing them within strained familial dynamics. In this instance, an overachieving high-schooler Tyler (an impressive bleach blond Kelvin Harrison Jr) of an upper-class black family in South Florida, who eventually snaps under the burdens of punishing expectations, toxic masculinity and an overbearing father, Ronald (Sterling K. Brown).

No one can fault Tyler for succumbing so dramatically to all his grueling external pressures. Spending his whole life under the strict regime of a controlling father, whose sole purpose in life into the ethos that a young black man needs to work twice as hard for a seat at the table; no place for mediocrity or sensitivity. Perhaps this resonates less for Trey and his peers a few generations, on one would hope the degrees of segregation have reduced slightly, yet this mindset is ubiquitous at home. After a serious shoulder injury develops which will inevitably hinders Tyler’s chances of professional wrestling, fear prohibits him from telling his dad, resorting to snorting oxycodone instead. Added to the mix, his girlfriend Alexis (Alexa Demie) ghosting him for his initial response to the news of her pregnancy, obviating him from any input into her decision. A relationship that Trey put in equal amounts of vigor as any other part of his life, the rejection hurts big time. A confrontation between the two takes on dramatic proportions, so much so that the film switches protagonist all together.

The camera now turns on to Trey’s younger sister Emily (Taylor Russell), almost invisible in the first part of the film as she and her parents are trying to deal with the aftermath, the reverberations of Tyler’s actions still ring loudly. The relationship between Ronald and Catherine (an exceptional Renee Elise Goldsberry) is souring by the day by the blame game, yet Emily’s newfound relationship with Luke (Lucas Hedges still playing 17-year-olds, 10 years into his career) is blossoming, providing an escape from the despair that has besieged her home.

Waves is a dazzling film, undeniably affecting. Its a heady experience, tou become submerged into all this ethereal haziness, copious amounts of light and space. Conjuring a mood reminiscent of a Terence Malik film (Shults worked on his film sets ) yet the technicolor radiance of the Miami sun is very much Moonlight, but from the right side of the tracks; all sound-tracked to highbrow hip hop and Trent Reznor.

Shults uses intricate immersive techniques to delve into the psychological workings of his characters, using close-up shots and jerky POV angles. The same filming methods used in his exceptional debut Krisha, centered around a woman on the edge, full of vices. The actress Krisha Fairchild also makes a sweet cameo in Waves. Krisha’s arc of accelerating mental decline leading to a catastrophic crescendo is emulated to-the-tee in Trey’s high school experience.

Yet through all its beauty and its faultless cast, I couldn’t shake off a senstaion of lethargy attributed to a flactuating pace. To a small degree, but present nonetheless. Once the shocking events and dramatic switching of protagonist passess, we are in perpetual anticlimax; saved slightly by the absorbing friction between the parents, these interactions however are given limited screen time. The overemphasis on style, coupled by its rather simplistic message, makes it all feel rather reductive. Simultaneously Shults filming style, choice of resonating topics and the manner with which he interprets them is very fresh; using directorial tricks that capture perfectly one’s psychological unravelling and further normalizing it. This is vital in a world just now coming to terms with concepts such as mental health and well-being.