With just three films under his belt, Trey Edward Shults is garnering a reputation for himself as an immersive filmmaker. 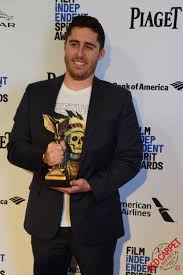 With just three films under his belt, Trey Edward Shults is garnering a reputation for himself as an immersive filmmaker. From the get-go with his exceptional debut, the low-fi indie Krisha, an astute observation of an older woman with numerous vices crumbles violently under the pressures of a family get together. Krisha’s surprising success showcased Shults’ original filmmaking style paving the way for his next, bigger release starring Joel Edgerton and Kelvin Harrison Jr (also starring in Waves), the dark and sinister It Comes At Night; a dystopian world ravaged by a highly contagious outbreak. With his latest release Waves, Shults offers a visual technicolor feats under the Florida sun, with an immersive filming style harking, taking us on a fluid journey of psychological unravelling as we enter the mental world of troubled high schooler Tyler (Kelvin Harrison Jr) and his younger sister Emily (Taylor Russell).

As part of our coverage of Waves, TLE had the opportunity to talk to Shults to tell us all about his movie.

Thanks for the interview. You’ve must have done loads. Just today, for my research I watched at least five of them on YouTube and there were tons more.

Really? (laughs) Oh my goodness… Well I’ve done a lot admittedly… but I had a break last week. So, I’m all set for today.

I found a lot of similarities between Waves and your first film Krisha.

Absolutely, I would say way more between those two, than with It Comes at Night. These two are more personal and semi-autobiographical. The approach with the filmmaking is very subjective, immersive, experiential, emotional. I would send the script to someone and say, think ‘more like Krisha, a bigger, more epic Krisha, that’s the spirit of the movie’. My middle movie was hiding the personal, making it more metaphorically personal. A different approach.

Funnily enough someone mentioned to me that the kitchen in Krisha was the same as in Waves.

Yes… the whole house, really. It was so funny. A few people mentioned that to me. I mean it’s not… ones in Texas, the other is in Florida. Completely different locations. But yes, as soon as I walked into that house, it was meant to be. I was thinking ‘this is the Krisha house right here in Florida’.

Your filming style, I would describe as psychologically immersive. You see what the character is going through in his head. What tricks do you use to get that effect?

Honestly, I think it’s everything. All the filmmaking we are doing is to bring out the internal, emotional, spiritual state of the main character… and then feel it through the filmmaking, if that makes sense. We let the character dictate everything. So, like from shot listing, to the sound design to music choices. Everything is like base level: where is Tyler at? Where is Emily at? Where are they emotionally at the point in their journey? Let them tell us where we are going. So, our intentions were for the viewer to connect with the characters’ headspace, as much as possible.

Sometimes that means filming with a lot of crazy movement and other times not moving at all. If that means spinning the camera in a car while Tyler is driving because of a certain feeling he is having, that what we did. Like this would represent feelings of the chaotic freedom of young love. Or a simple conversation on a bench, like when Emily takes over and she has all these sad feelings like isolation, we would reduce the aspect ratio and from the camera moving, we would stop it and film motionless. It’s about trying to bring the internal world of the character, out.

Initially, whilst watching, you have the sensation of where am I? and where is this all going? It’s not until the moment when things come to head with Tyler, that things fall into place.

Well that’s what I meant by making it feel immediate and immersive. Especially with Tyler, he is in it living his life and when it starts dismantling at a rapid place and he doesn’t have time to process. That was a major talking point for me. The filmmaking is designed in such a way that we are not objectively watching it happen. We are in it with him, watching out. So, I would hope you the viewer, you felt you don’t know where it’s going, that you are in it with them. Then I would assume as the movie progresses more perspective comes into play and you start to realize what the movie is about. I was hoping that it would reveal itself slowly like that.

The narrative is placed in a familial context, just like your two previous films. What’s your personal interest in exploring family dynamics?

Honestly, I don’t know (laughs). I think I’m just fascinated by family, but I’m not sure, as these are extreme situations that I create within the family. I guess I’m just exploring personal stuff. I mean families are complex. Humans are complex. Relationships are complex. It’s the grounds for a lot story telling.

Was there any issue or worry on your part in telling the story of a black family?

Well it happened really organically. That’s why I think it was right. It happened because Kelvin and I worked on my last movie together and we became really close. We wanted to make something and the only idea I had at the time was this. A year went by and then we tried to figure it all out and then I started to properly write it. During that period, we were doing these things which we would call ‘mini therapy sessions’, where we just talk about our past and our experiences at the age at which Tyler is at. Through talking we found a lot of commonalities in our experience but also specific nuanced differences. I was trying to figure Kelvin’s mental state at the time, his relationships, his family, generational baggage. Focusing further on his relationship with his father… all that good stuff.

Then I finally had a script, I sent the script to Kelvin knowing that he would only be the main character for half the movie… he still wanted to be in it. Then we kept working on the script. Kelvin would give me notes and then I would go back a do rewrites. This is like eight months before the shoot. Both Kelvin and I, thought the movie would only work if it was specifically, authentically this black family. In specificity, you can reach a more universal place. Obviously, I’m white and everything comes within that in the sense that I may or may not grasp on some things. But why I think it works, it’s that collaboration with Kelvin and hearing him translate his experience.

So, Kelvin was like your consultant on the movie.

Yes exactly, big time. I’m a super collaborative in general, but I’ve never taken it this far with the script like I did with Waves. Which was fun, but it was a base level thing. He is one of my best friends, we wanted to work together. And I would say that collaboration spews out with the other actors as well.

I read that you were Terence Malick’s apprentice for a while?

Not his apprentice. I just got to work with him on a few things.

In Waves I can see references to his work.

Sure. I can see where you’re coming from. I probably can see less objectively than others, because I’m making the movie. What I do know is that he changed the course of my life. Working for him, changed the course of my life. It taught me how to approach filmmaking and how to find my own voice. Make movies in a unique way that feels true to you. And there’s the fact that he made some of my favourite movies ever, like Tree of Life. I was not consciously drawing on him in a way, but I does make me happy that it feels connected.

You are tackling with a lot of issues in film like race, gender, generational gaps, abortion, substance abuse etc but it never feels intentional or preachy.

I would say the thing that made it ok, is that we never wrote in an issue because it’s an issue. It all came very naturally. So, it’s like drawing up on life stuff, letting that organically dictate the story. I don’t think the movie is making any statement on any of this stuff. I think if I came out it the other way than how I did, I would drastically fail.

Waves is out now.