Have you ever seen a film in which an excessively flatulent corpse falls in love? Unless you’ve already seen Swiss Army Man, I’m guessing you won’t have done. It’s almost as if someone in Hollywood has actually been listening to everyone complaining, “Every film is a sequel! There’s nothing original anymore! Stop remaking things that […] 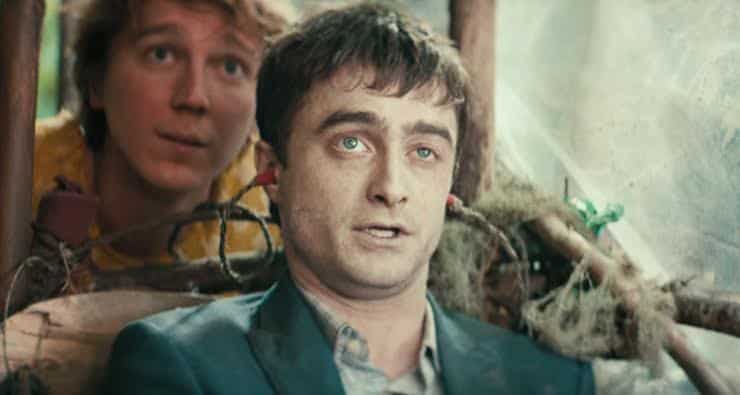 Have you ever seen a film in which an excessively flatulent corpse falls in love? Unless you’ve already seen Swiss Army Man, I’m guessing you won’t have done.

It’s almost as if someone in Hollywood has actually been listening to everyone complaining, “Every film is a sequel! There’s nothing original anymore! Stop remaking things that are already good!”. At the absolute most you could compare Swiss Army Man to Castaway, in so much as it does involve a castaway. And maybe a corpse version of Wilson. But that’s pushing it. There really isn’t anything like this film.

Does that make it inherently good, just because it’s different? No! But fortunately it’s good anyway! Double points!

Paul Dano (you know, the would-be pilot in Little Miss Sunshine) plays our protagonist Hank Johnson, who has been washed up on a beach somewhere, for some reason, for an unspecified amount of time. Presumably it’s somewhere near the United States, because he has an American accent and his beard isn’t that long. Daniel Radcliffe (you know, that wizard bloke) plays Hank’s sidekick, known only as Manny. He also washes up on a beach somewhere for some reason, and conveniently, it’s the same beach as Paul Dano. But unlike Dano, Radcliffe is already dead. You’d think this would be somewhat of a sticking point in a blossoming friendship, but as we are soon to discover, love – whether in a relationship, between family, or a couple of cool hombres – really does conquer all. And together they are on a mission to get home – wherever that is – and to track down the girl from a photo on Hank’s phone. Things do not go to plan.

From the outset, Dano and Radcliffe’s bromance chemistry is utterly believable, allowing for much of the plot to not make any sense at all. Dano’s troubled and introverted Johnson is extremely relatable, but it’s Radcliffe’s wide-eyed portrayal of the naïve corpse Manny that really steals the show. He’s a reminder to us all of society’s constraint on things that come naturally to us: feeling curious, falling in love, and farting. Loudly, proudly and in Manny’s case, very productively. It’s not all puerile, all black comedy or all drama. Directors ‘The Daniels’ first feature film is a mixture of all three, and is incredibly compelling. It’s got all the emotional ups and downs that any film more complex than Sex and the City 2 really should deliver, with exquisite cinematography from Larkin Seiple making it a visual adventure to boot.

It is as perplexing as it is joyful, as crass as it is touching. And at the very least, it’s got some cracking fart jokes.