By Stephen Mayne @finalreel Tomato red is almost the colour of Jamalee Merridew’s hair, and it’s the name of the Daniel Woodrell novel from which this film is adapted. Woodrell has written nine novels to date, a number of them set in the bleak forgotten lands of the Ozarks; mountainous country crossing over Missouri, Arkansas […] 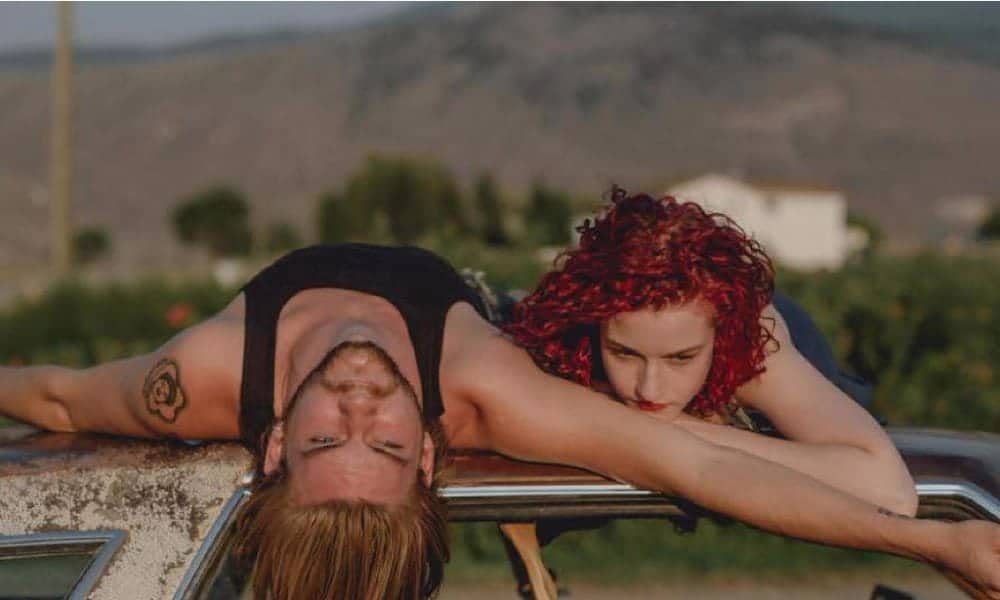 Tomato red is almost the colour of Jamalee Merridew’s hair, and it’s the name of the Daniel Woodrell novel from which this film is adapted. Woodrell has written nine novels to date, a number of them set in the bleak forgotten lands of the Ozarks; mountainous country crossing over Missouri, Arkansas and Oklahoma. There’s clearly something cinematic about his work because two previous novels became the excellent Ride with the Devil (1999) and Winter’s Bone (2010). Tomato Red makes it a trio of successes delving in unexpected ways into life on the margins.

The film opens with the sound of owls and strings, and the sight of a brooding man sat in his used up old car next to a rail track. Wide spaces stretch out before him, the kind he’ll never have the freedom to truly exist in. Sammy (Jake Weary) is a very recent ex-con ready to return to old ways. He would have if an attempted burglary hadn’t led him to Jamalee (Julia Garner) and her brother Jason (Nick Roux), a pair of dreamers determined to escape the misery of their home in Venus Holler.

He falls in with them and their mother Bev (Anna Friel), a woman more accepting of a place she feels powerless to improve upon. There they ride through a series of dubious schemes aimed at finding a way up the ladder. Sammy is brought in as security of sorts, quickly becoming one of the family. Later tragedy will strike, the narrative hinging on a brutal development, but it isn’t the real tragedy. That occurred when they were born into a life at the bottom, despised by everyone else. In theory they can better themselves, but in practice every route considered acceptable is locked and barricaded. Is it any wonder they might try to work around the law?

Irish director/writer Juanita Wilson dwells heavily on the isolation felt by this unconventional grouping. She frequently slips the rolling hills into the back of shots, freedom in sight and out of reach. Trains are often passing through; coming from, and going to places while Sammy and his friends remain where they are.

Sometimes this restrictive feeling is laid on too thick. Sammy’s voiceovers fill in blanks that were already clear, dialogue occasionally doing the same. This is a subtler film than that though, told in heavy pauses and simmering emotion. One scene at a snobbish country club is hard to watch, just as the revenge they take is a fleetingly joyous release. Wilson also draws superb performances, particularly from Friel who’s given a solid façade gradually chipped away by events.

At various stages it feels like the next development has been pre-ordained, only for the story to pivot away. There are to be no easy answers. Standing in the back garden of a large country house, Jamalee asks why some people get to have all this. Tomato Red offers no satisfactory response, because the people asking the question are never afforded such luxuries.

Tomato Red is in UK Cinemas from Friday 24th February.

More like this? Read It’s Only the End of the World review here: http://www.thelondoneconomic.com/film/end-world-film-review/22/02/