By Anna Power I met Liam Neeson at a hotel in knightsbridge to discuss the release of his upcoming films Martin Scorsese’s Silence and J.A.Bayona’s A Monster Calls both out on New Year’s Day. I asked him: Both A Monster Calls and Silence are in their own way about human suffering. What are your thoughts […] 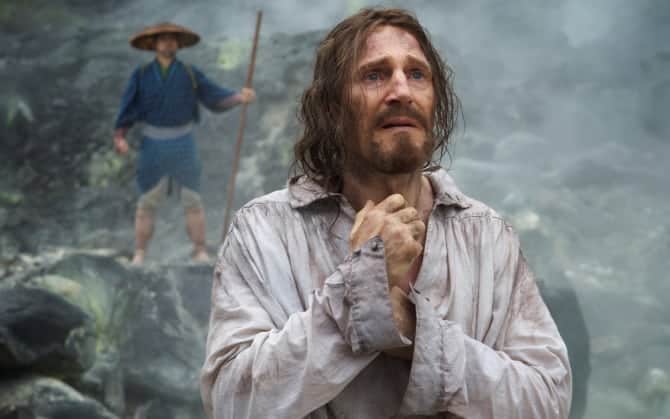 I met Liam Neeson at a hotel in knightsbridge to discuss the release of his upcoming films Martin Scorsese’s Silence and J.A.Bayona’s A Monster Calls both out on New Year’s Day.

Both A Monster Calls and Silence are in their own way about human suffering. What are your thoughts on faith and how it sustains us in suffering?

Liam: It’s an extraordinary subject. At the moment I’m very fascinated with science and the inroads they’re making into understanding the brain..natural opioids in the brain and what releases them…and placebo effects. Is faith all a construct up here? (he points to his head). It’s all very interesting. Science will ultimately answer all the how questions but one they can’t is the big why question.

I expected A Monster Calls to be visually beautiful but what surprised me was just how complex the life lessons were in A Monster Calls….It was good to see older children spoken to in this way…

Liam said: It’s an extraordinary book. It definitely ranks up there with Oscar Wilde and Fairytales like the Grimm Brothers – all the classics. It was multi-textured and raises questions – I call them the refrigerator questions – you read the book and think that’s nice and then you go to the refrigerator and you suddenly go, wait a minute and you’re pulled back into it again. The boy has nobody to turn to and he’s desperate to be told the truth. Kids can handle stuff. Tell them the big issues in life if they come up. I’m a dad myself and I love kids – this story really appealed to me on a very basic parent level. I had seen Bayona’s The Impossible and The Orphanage and I love how he nurtured those performances from those kids. He’s got the same gift as Stephen Spielberg. He doesn’t talk to them as kids. He talks to them as equals.

In response to other journalists:

The opportunity to do Silence came up through the usual channels and Martin sent me the script. ‘talk about a hostile environment – I can kind of understand the Japanese reaction to that kind of colonialism – the Portuguese sent the missionaries in first….they had no idea of the spirituality that was already there…Buddhism and Zen…Of course the Japanese were terrified of being colonised and they ruthlessly put down the Catholic faith. They were determined to stamp it out and they did.

I think Scorsese was trying to explore his own spirituality. His own quest. Andrew’s character has to get rid of his own doubt. He was a very arrogant priest going in to Japan…the Jesuits underestimated the spirituality the people already had.

After shooting I immediately went into my Richard Dawkins – The God Delusion and various books on atheism. I wouldn’t describe myself as an atheist – I’m still questing.

In response to a question about the difficulty Scorsese had in financing Silence, Liam responded: Silence is a tough sell. We’re not a spiritual society anymore. Church attendances are plummeting.

When asked about his latter career in action films Liam said: I was surprised the Taken series came late in my career. I enjoy doing all the fighting stuff and it’s fun to train for that. I don’t do my own stunts though.

Liam was asked about directors he’d like to work with. He said: If I could’ve worked with any director I’d have liked to have worked with John Ford.

Liam reflected on the film industry: I get worried about the industry sometimes – all the technical know how and large screens. I worry that people will stop going out to see films, and sit in a room with strangers and watch something – hopefully- magical.

Liam went on to talk about his favourite authors: Tolstoy, Victor Hugo – Les Miserables – which he praised as one of the great works of art. He praised Donna Tartt’s The Goldfinch – It’s epic. This is a real masterpiece.

Both A Monster Calls and Silence are out on New Years Day. You can read our A Monster Calls Review here: http://www.thelondoneconomic.com/film/a-monster-calls-film-review/28/12/